A short, anonymous video posted to the New World subreddit has the community buzzing that this might be an authentic leak from the secretive massively multiplayer game that Amazon has been developing for the last few years now.

It appears to be part of a marketing trailer that lays out how players will interact with each other in small- and large-scale activities. We also get glimpses of some of the graphics, including players running around with muskets and armor, a town fort, and interactive maps.

The full narration of the video is as follows: “Group up in parties large or small for coordination. Share chat, maps, status awareness, buffs, and experience. Working together has never been so easy. Guilds and alliances enable the organization of hundreds of players, with their own tasks and roles in large-scale efforts toward a massive martial and economic power.”

It should be noted that there has been no confirmation from Amazon that this video is authentic and should be treated as a rumor — an intriguing one, at that — until proven otherwise, though sleuthing by our tipsters and Redditors has uncovered some interesting parallels to the dormant twitter account of the game’s creative director, which may be a clue – or may just be the sort of thing a hoaxster would pick up on. 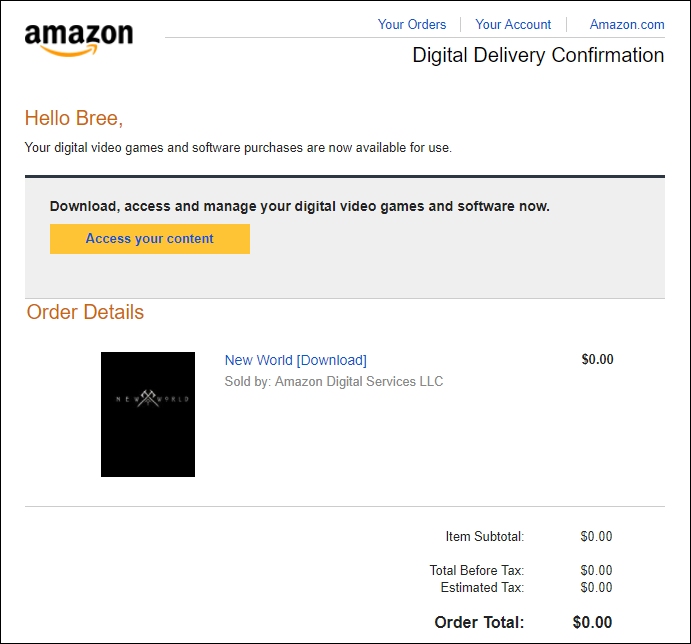 What if they were simply removing the “pre-order” option from the page because neither game (New World or Crucible) or anywhere near ready for that, yet? I wasn’t expecting any real news on this game for at least a couple of years. One would think they would announce any cancellations, as they did with Breakaway, especially by now since it’s been several days since this whole situation took place.

So THAT is what that email and “pre-order” was. When it hit, I was scratching my head.

Really, I don’t understand the “XPs” reference as a button??

Ah, ok. Never heard of those buttons before today.

I got the email. Thought it was odd.

What the heck video player doesn’t have a pause or stop? Annoying! Should have a warning on it!

I pre-ordered before Amazon’s presentation ended at Twitchcon 2016, but note the date listed on my account page now.

Well what’s interesting is that the pages for both New World and Crucible have changed in the past few days.

Looking at the Jan 2 cached page for Crucible, it had a pre-order button and said the item was not yet released. Today however it just says “Currently Unavailable” with a lot of text missing and a button to get an email when it becomes available – but no pre-order button.

The New World Jan 3 Cache just says – in red this time – Currently Unavailable and nothing else, not even a button to be emailed.

There’s something about the scene at the end with the guy running with the torch that reminds me of GW2 graphically. Not sure if it really does resemble GW2 or if it’s just confirmation bias.

I have to say that it looks nothing like gw2. It tends to lean more towards photorealism with trees and fauna that sway, smoke that has body and much more realistic looking reflections. Also the scale is much better in terms of environment to character.

I didn’t get the email from Amazon that other people did so I think it was some sort of mistake. Interestingly, New World still shows up here https://games.amazon.com/games. So either the “Stay Updated” link was changed to reflect an upcoming update such as testing, or the game was cancelled and they forgot to remove the listing from the Amazon Game Studios page.

I can’t edit this but I read a comment on the New World subreddit and double checked my email – I got this same email back on December 13, a year after I originally placed the pre-order. So it appears it’s some sort of automatic email that gets sent a year after a pre-order was placed.

Saga of Lucimia on its comms blackout: ‘We do not have...

A slim majority of Acti-Blizz investors approved its ‘say-on-pay’ policy after...

Sea of Thieves kicks off its third season with new goodies,...