One of the things that impresses me about the submissions to One Shots here is that so many of these pictures really could be blown up into high-resolution posters and be hung as honest-to-goodness art. I’ve always been meaning to comb through my screenshots folder and take the best of my best to a store and get that done, but I am a lazy man and figure that you all will keep my eyeballs entertained for one more week.

Here’s a good example of a poster perfect pic from Camelotcrusade, who shared this interesting shot from Star Wars: The Old Republic. “It feels like a galaxy far, far away now, but I really liked the title cards for Knights of the Fallen Empire,” he wrote. “Here is one of my favorites which transposed my character against a backdrop of galactic war.” 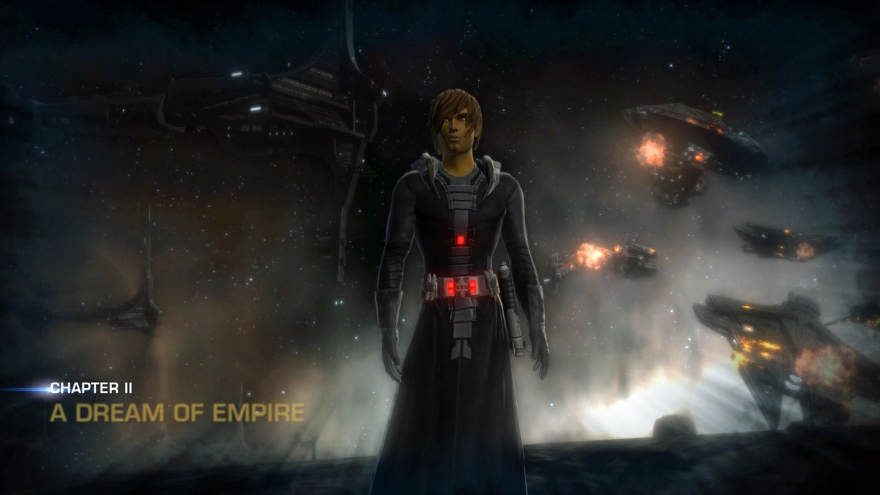 “There’s always a decent chance for a shot during the energetic Blade and Soul,” said Rees Racer. “The Soha and Juwol bar fight is always good fun, and I look forward to it every time I’ve started a new character (as it happens fairly early in the story). Unfortunately, almost any shot of Soha borders on exploitative, but this one captures the mood quite well. I’m glad I saved it.” 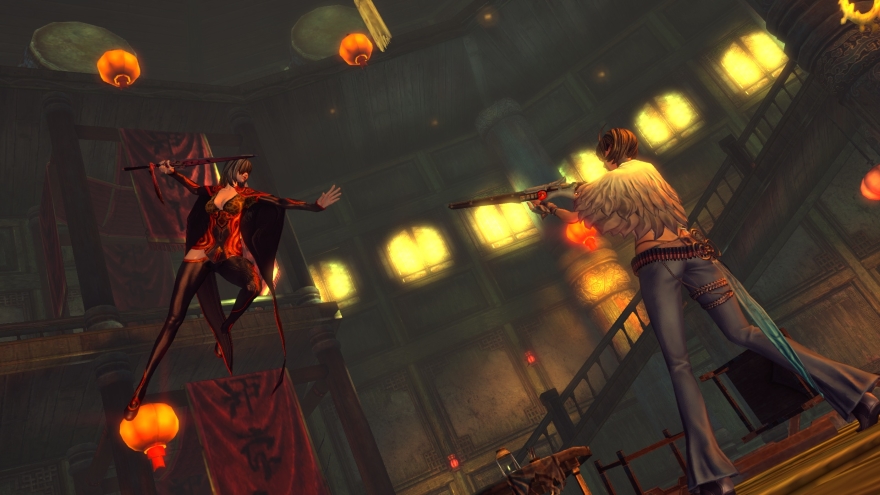 If you haven’t guessed already, most of these shots were pulled from last week’s challenge to feature “striking cutscene pictures.” Vincent stepped up to the plate and knocked it out with this one, I think.

“Stormblood was full of harrowing cut scenes, but Zeno’s attack on Rhalgr’s Reach was pretty gut-wrenching. Thankfully, in FFXIV you can replay the MSQ cut-scenes and I was able to grab this shot of Y’shtola trying to deflect an attack from Zenos.” 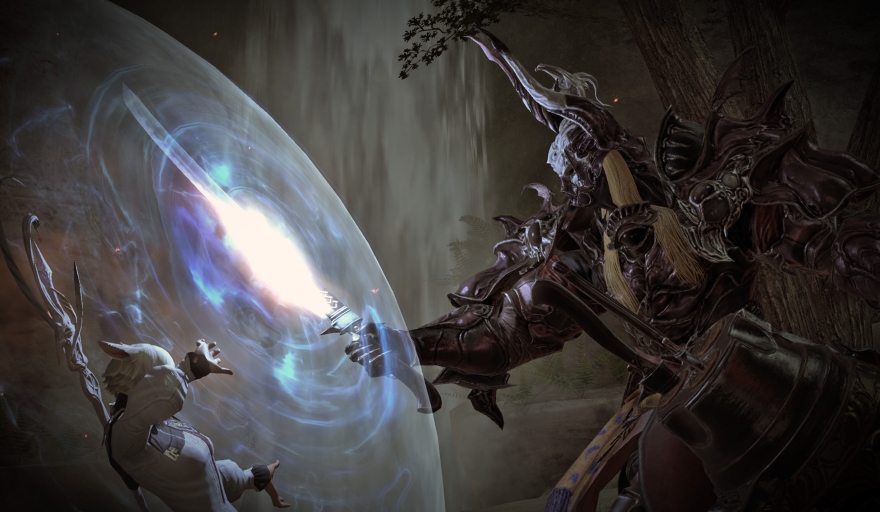 Surprisingly, there were several pictures from RIFT last week, but I had to go with this one because (a) RIFT’s squirrels are among the game’s best creature creations, and (b) they totally remind me of Star Wars: The Last Jedi’s Porg. 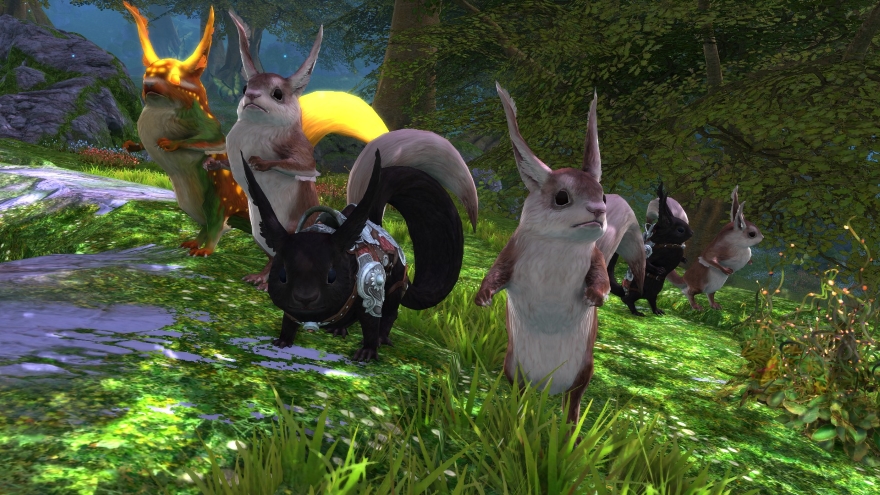 Robert has this rather interesting pic that suggests a rather fatal end for his character: “I’ve played Megadestroyer in Guild Wars 2 about a hundred times, and I never saw this happen before. Such a gorgeous effect most people will never see.” 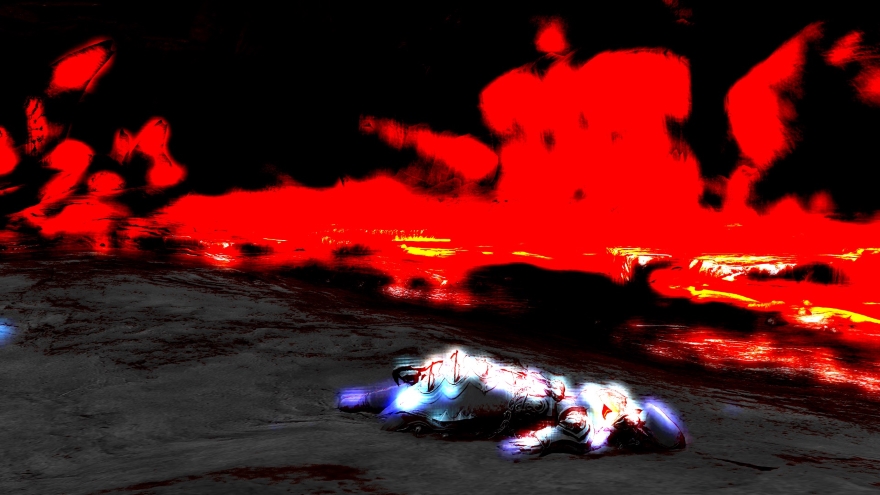 Ready, set, go for your next screenshot challenge! This week, the theme is “cities, towns, and villages.” See what you can dig up or find for your MMO’s populated areas and deliver some striking pictures of cityscapes and quaint villas for us to ogle!

This one is one of the more amusing images I still have archived from the late great City Of Heroes.

I hated Crey Snipers. Even on a character who could really no longer be hit by them, such as my main hero Cyberman 8 in the following shot. (Speedster and “Capped” defense)

The set up for this shot went something like the following:

Cyberman 8 zooming along, noticing the shot whiz past him, pulls a U-turn and starts searching the building rooftops…
*targeting reticle locks in* –
“Aha. Not getting away with that today, friend.”

Agreed, beautiful pic. I’m definitely a fan of the Wildstar art style with all the pastel colors.

Let’s see. Always hard to choose, since I have so many FFXIV shots. Here’s fireworks in Gridania, and leaving Ul’Dah.

(Hm, having trouble posting this… I’ll break it in two and see if that helps any.)
(Yeesh, and it reversed the order of the images on me. Okay, let’s fix that in edit…)

1. ESO. The city of Sentinel, capital of Hammerfell, looking towards the palace. Love the way the dawn sun shines off the brass domes.

2. STO. Admiral Welch people-watches in the Bajoran city of Hathor. This was just outside the Temple of the Prophets, so in addition to the normal birds and insects, there are intermittent flutes and gongs. It’s tranquil. Every time I visit, I loiter to enjoy the vibes.

3. SWTOR. Sith Warrior Nuwayrah Faris and adopted sister / Chief Mischief Officer Vette arrive on Corellia. The sky is full of buildings, smoke plumes from burning buildings, and duelling starfighters exploding each other. Vette seems unimpressed, I imagine she complained that I never take her anywhere nice. (I made up for it by going through all of Rishi with her. Seemed more her kind of place.)

4. SWTOR. Nuwayrah and Jaessa Wilsaam at their home on Dromund Kaas. A perfect environment for gloomy meditation, what with the never-ending rain. The statue has since been replaced by a parked bomber (the wing is over Jaessa to keep her dry), but the forest of Yavin and Rishi jungle plants off to the left has only expanded.

5. ESO. The city of Bergama as an evening sandstorm rolls in. I hope that NPC and his dog made it home before things got bad…

6. ESO. Bergama again, but on a clear night lit by streetlamps.

I’ve got one of the Mirror Universe Bajor.

And looking right at my bench. :) (Or some version thereof.)

There are maybe one or two missions that were axed that I miss, but on the whole I think Cryptic did a great job with their DS9 story arc revamp. The DS9 arc for me remains one of the highlights of the game.

Ok, so how about a new pic from a new village in the new xpac in Blade and Soul? Heh, did you even wonder what I would post? Yes, this is a village, not a city. Pretty interesting place Solak and beautiful too.

It reminds me of something right out of FFXIV actually. Maybe it is the architecture.

What’s interesting about Solak (the zone which this image likely comes from) is has this whole South Asian thing going for it. Including the clothing. o.O

Yup. You even get a veil a little later.

Second screenshot is the Dravanian Hinterlands as the sun is coming up, the first one is probably my favorite place in the new expansion, the Azim Steppe (FFXIV)

Since it’s the only thing I’ve been playing lately, my screenshots are coming from Ghost Recon Wildlands

Thanks for the feature, Justin! I love that composition, too.

Moving on to this week’s challenge, the cities in SWTOR are noteworthy because they put more energy into architecture than into making them feel alive. Yes, there are sometimes NPCs walking around, but they tend to feel like part of the scenery rather than living in it. I think they expected the players to be the bulk population, but as someone who mostly played on a low-pop server back in the old days, it was mostly me and my shadow.

Here are just three of many scenes ripe with possibilities for story, adventure and more people: An exotic market in Rishi, the approach to the Galactic Senate in Coruscant, and a tranquil scene with bubbling fountains on the Republic Fleet, somehow devoid of jumping players (I jumped it in afterwards, not to worry).

But my introduction to them was in table-top BattleTech. I continued playing through ALL the MechWarrior PC games…and of course, MechWarrior Online. I was a founder for that game, and continue playing more than 4 years after launch.

One my most reliable mechs is the Black Widow, a Hero model of the venerable Warhammer, which according to lore, “for centuries practically defined the entire class of heavy ‘Mechs.” At 70-tons and approximately 13 metres tall (~40 ft), this Inner Sphere machine served with distinction during the Clan invasions, undergoing many technological improvements over the years.

WIth more than 20 “official” variants, I’ve kitted out this one with 2 Extended Range Large Lasers, and 2 LBX-10 Autocannons. This keeps my weapon grouping simple, but also allows me to fire all weapons simultaneously with some regularity without overheating…and can do significant damage at almost every range.

Oh, as for the screenshot challenge…here’s my Black Widow in River City, firing all weapons (Alpha Strike) for effect and coincidentally providing some sense of scale.

Love MechWarrior. I played a bunch many years ago. I do plan to go back sometime.