With Age of Conan’s saga server underway, players both new and old are flooding in to check out this limited-duration PvE shard with all of its special rewards. With the future of the game perhaps at stake, Funcom is most definitely watching how the saga server proceeds. Lead Designer Massugana isn’t sharing population numbers just yet, but he did draft up a pie chart that showed the class distribution of the inaugural week.

Out of the dozen classes on this server, the Conqueror is by far the crowd favorite at 12.01% of the population. The underdog? That would be the Assassin, with only 6.02% of players choosing to strike from the shadows.

We know you’re curious about Age of Conan’s newest server ruleset, which is why we’re sending our resident barbarian MJ to investigate! Check it out on MOP TV tonight at 9:00 p.m. eastern. 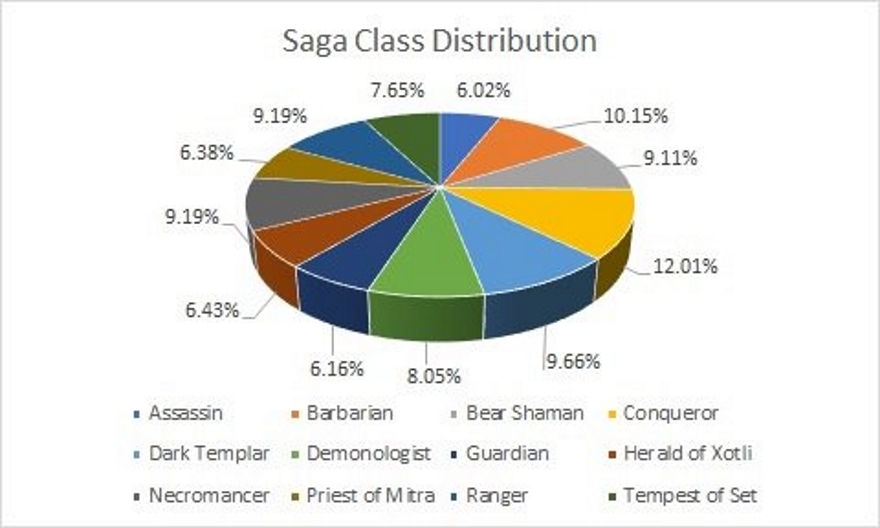 Have been casually playing, but enjoying it except for occasional overcrowding in some zones.

So, about this new server:

– When is it coming out?

– Will old players be able to transfer old and full level characters for this new server, or it is like “only new accounts” or something in between?

– Is it required to have any subscription or anything like that to be able to join this new server, or anyone can join it?

– This new server is noob friendly or if you’re new you better stay out?

Thanks in advance if anyone is able to help.

So the new server is already live, as of 1/24. You cannot transfer old characters, has to be a new one and you can’t use vet tokens or other /claims. No sub needed. Relatively noob friendly from what I can see, there are some people already at cap and doing the usual posting for runs “AA/Exp/Gear Req’d”, which is amazing to me a week after the server launched

Somehow I found returning to AoC refreshing. Not that it is an MMO decade old has something new to offer. Just like the setting and all. Also – never finished the story. Maybe this time I will.

I think most classes were selected based on ability to level fast solo but good to see some tanks for those upcoming raids. PPL racing to level not miss the raid series boat – you don’t want to hit 80 and find 90% of the server population is already doing T5 runs and no good teams for the lower tier dungeons.

Well, it is a time limit server where you get rewards for hitting character level milestones.

Char level milestones are just the start – the 1st 3 ppl hit 80 in 11 hours, my slow leveling Demo is already 60 in 5 days. The goal is to progress thru all levels of the games’ dungeons and raids, that will take more time and work.

I tried it out & while it was playable: I got bored after realising that being an old school MMO means old school mob content, which means you need a party.

… I just don’t care enough anymore to talk to people and make friends.

I’ve been doing a run through as a HoX, and it’s nice to be back for a visit. Apparently it had been 4.5 years since my sub was last activated, and very little seems to have changed. Will play for the saga just for grins, but kind of expect this is AOCs last hurrah

Heh… Collegues (of sorts). Choose HoX too after some consideration.

We know you’re curious about Age of Conan’s newest server ruleset, which is why we’re sending our resident barbarian MJ to investigate! Check it out on MOP TV tonight at 9:00 p.m. eastern.

State of the Union speech tonight at the same time. Not sure if that would draw away MOP viewers or not?? People tend to like watching both a riviting speech and carnage/collissions (depending on your political leanings), so, /shrug

State of the Union speech tonight at the same time. Not sure if that would draw away MOP viewers or not??

Both can be recorded and watched later, lol. Not a big deal in 2018.

Very true, but it always felt weird to me watching live news events later on, via recording.

It’s like I tell my kids all the time… “If you read a newspaper a year old, but still learn something new.. it’s still ‘news’.” :)

you can actually learn more from reading / watching something old, because you can process and analyze it better after the fact. but while you are experiencing something in the moment, your are just reacting as it happens.

Also, you can pretty much check the entire timeframe of that point in history to see the effects of said newsworthy action.

I can assure you that there are plenty of MOP viewers who have not the slightest interest in the State of the Union speech. The non-US ones for starters!

I bought that game at release for $60 had access to all the classes. Tried to come back to play that new server and saw the classes I once purchased and had access to play were now behind a micro-transaction paywall. Almost criminal taking away content you already paid for, I quickly uninstalled.

FYI they changed that a couple years ago, now you can play anything even if free, I believe. Still, I hear what you’re sayin’.

Not true. Please don’t spread misinformation. All classes are available for ftp.

I suspect some of his characters were locked because the active slots were reduced for non-subscribers.

More likely he saw that one of the races was locked out, forgot that it was added as part of an expansion and wasn’t part of the base game, then rage quit.

Not related in any way, love the avatar.

The Daily Grind: Which MMO do you always think is older or younger than it is?

The Daily Grind: How would you solve the RvR MMORPG balance...