END_OF_DOCUMENT_TOKEN_TO_BE_REPLACED

A lot of times, I spread out my time with Final Fantasy XIV patches, unlocking and finishing up content at a reasonably sedate pace. For whatever reason, that wasn’t my approach this time around. I cleared through all of the day one content that I had any designs on doing right away, which means I’ve already gotten through the end of Sigmascape, the Jade Stoa, and both of the dungeons in short order. It went faster than I expected, truth be told.

There’s always a lot to talk about with these patches and a lot of opinions, which is always fun. But one of the interesting points that I found comes up when I consider how the game divided up its storylines for this patch. I had misunderstood what the patch notes noted about Hells’ Lid as a dungeon and where it fit into the MSQ, and the change in this case makes me very happy for both storytelling here and in the future.

First and foremost, for the people who haven’t finished the MSQ, I’m going to avoid spoiling anything that isn’t already sort of known quantities. But it managed to do several things that I appreciated, starting by making the fates of two characters from the stinger in 4.1 as much of a non-issue as I had speculated. The question was less “what happens to them” and more “what do we do now that this is happening,” and I appreciate that.

One of the things I really appreciate, though, is the way that the game handled its content distribution. You still have the same overall number of storylines as we had in Heavensward, but this time around the newest (and presumably last) story thread for the new primal fights kicks off with a dungeon and specifically spins off from the MSQ. Where Heavensward felt as if it had four separate storylines running totally separate, it feels like Omega, the Four Lords, the MSQ, and Rabanastre are all still tied together even as they concern different characters and challenges.

They also feel like they’re four storylines rather than the homes of four different content types, which is nice. (Sure, from a practical standpoint that’s probably where we’ll wind up from here on out, but it feels more unified.)

Boy, this patch was laying on the Final Fantasy VI homage on pretty thick, huh? Fractal Continuum (Hard) isn’t quite a Final Fantasy VI dungeon, but it features a boss pulling from all three of the Warring Triad and the last boss is clearly meant to evoke the Ultima Weapon from that game. (Or “Atma Weapon” if you’re English-speaking and sufficiently old-school.) It also features a coda to the story of a beast tribe people have been asking about since the original dungeon showed up, so that’s nice.

In terms of mechanics, the first boss has a neat play on avoiding things by locking down parts of the arena for cannonfire combined with the “mine” defenses from Doma Castle. It’s pretty intuitive. Second boss requires a bit of memory about the Warring Triad, but it’s not too punishing if you miss a point or two. The last boss has some un-telegraphed attacks where you should run away from him if he raises a claw and run toward him if he stands up; beyond that, there are normal dodging games to play. Fun stuff, all around.

As for Hells’ Lid, here’s a dungeon that shows off how much stuff the developers can pack into a run by cycling through three very different settings in one go. We start out in a lava cave, move to more conventional undersea caves, and end in a place that feels very much like Shisui of the Violet Tides… which makes perfect sense, given the context. It feels organic all the way through, which is nice.

The first boss chases people and should be dragged over his discarded weapon and shield to knock him out of it, as near as I can tell; he’s easily the most boring of the batch. Second boss makes the outer ring of the arena dangerous to stand in most of the time and has a confusing cyclone phase; watch the orange lines to see where he’s going to dart around. Last boss, keep an eye on the arrows on the tiles to follow the path of the water bombs and dodge the obvious stuff. It’s fairly straightforward but it hits hard.

Really, both of these dungeons hit hard, and if you’re accustomed to cruising through stuff as a tank at high speed, you may want to hang back a bit more. That’ll change as you pickup more high-end gear, but for now a bit of caution is advised. 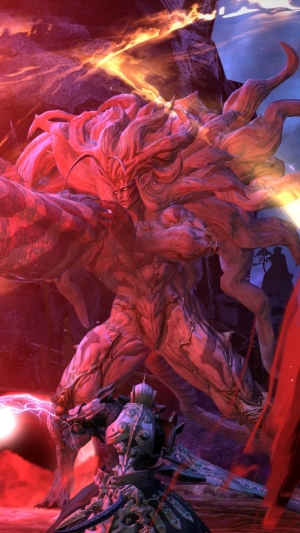 Boy, this was a fun surprise! I had no idea what to expect from this particular fight, but I can safely say that “NieR-style bullet hell” was not on the short list. There I am, minding my own business (or hacking away at the boss with a pair of swords, as you do), and suddenly here come the fuck orbs.

For those of you who have not played NieR or NieR: Automata, bosses in both games tend to vomit up sheets of similarly colored orbs of doom, which you have to dodge or attack specifically to destroy. Their appearance in this fight is particularly familiar.

It’s not a terribly difficult fight on a whole, but I feel like it managed to handle familiar stuff with very novel approaches. Its phase transition in particular was really fun, and I look forward to seeing other fights in the same line. I still wish that they’d add a little bit more of a reward for doing these fights on normal, but it was also more fun than any of the Warring Triad fights, so I’ll split the difference.

Taking on the clown

Honestly, I feel a little bit let down by Sigmascape on the whole, insofar as the opportunity was right there for a little more actual dungeoneering instead of just another sequence of what amount to trials. I also realize that’s kind of nitpicking, and the bright side is that all of the fights here are pretty fun, even if I feel like the Kefka fight is a little overloaded with stuff. Not totally overloaded, just maybe one or two mechanics too many.

The Phantom Train that serves as the first boss is pretty fun on its own, with lots of ghosts, hopping around, and some fun mechanics involving hopping on the train’s back. Chadarnook is a straightforward fight once you suss out how to cope with his big attacks, and beyond that it’s just a matter of rinse and repeat. The Guardian, meanwhile, is a bit of a mechanical slog that kept feeling like I was missing some crucial piece of information, something that would make everything come together. It never felt like a unified fight, just “dodge lots of stuff, sometimes there are adds that spawn.”

I do like that he copied bosses from both Final Fantasy VI and earlier in FFXIV, though. That was a cheeky touch, but a fun one.

Kefka, meanwhile… he feels like fun, but I keep feeling like the Graven Image attacks are a little hard to suss out where you’re at. This might be like Exdeath’s void channel, where it’s hard to always see it but makes sense once you get the pattern down, but it felt kind of messy in practice. Not awful and not even all that bad, just… again, messy.

The lore and character development, however, remains top-notch. I also appreciated the fact that the game gave us a completely new fighting stance for a weapon wielded over the course of the storyline, which implies to me that we’ve got a hint at one of the jobs coming in with the next expansion. (I’ve been suspecting it for a while, but I’ll keep the exact weapon quiet for those who want to avoid any hints of spoilers. Considering the characters involved, you can probably guess.)

A lot of people are upset about the whole setup of glamour plates, but I think the big reason for that is people thinking of it as a very different system than the one it was meant to be. (A fact not helped by previews of it, either.) Glamour plates aren’t there as additional glamours; they serve as a quick way to apply multiple glamours that you’re going to apply as a group anyhow. They’re basically a free application of a suite of glamours all at once, like a saved outfit.

That does limit them somewhat, but it also makes a certain amount of sense when you have certain pieces that you’re always going to glamour together. In the long run, it can save you some prisms and time to apply things in one batch. It’s useful when it’s applied that way; if you’re looking at it more as a way to apply different glamours to different jobs that use the same gear, it’s going to disappoint rather notably.

It also overwrites any existing glamours, so be fairly warned. It has uses, and it has space to expand in the future; it’s just not a perfect solution to everything.

Feedback, as always, is welcome down in the comments or via mail to eliot@massivelyop.com. There are still a couple of things to talk about in terms of patch content, but it’s not quite substantial enough to make up a whole column; instead, I’m going to talk about something asked a few weeks back about cosmetic systems or customization for jobs other than Summoner and Bard.

There was a part in Hell’s Lid after you jump down into the opening in the lava…once you clear those adds and then all of a sudden, the lava parts like Moses in the Red Sea and it’s sight to behold. Amazing!