Here is some nightmare fuel for gamers imagining the future of the industry. How about an artificial intelligence that deliberately manipulates and messes with players in games to drive revenue growth?

Back in January, a leaked and unconfirmed (and possibly fake) slide show from Data Broker LLC outlined a draft of something called “online game revenue models with AI.” In it, an AI was described that manipulated players’ gameplay experience to drive them toward more microtransactions. Even worse, it uses real-world information about you to drive this process.

“We have proven that allowing the AI to alter a player’s game as a whole (social engineering),” the slide show appears to say, “and alter the player’s individual gameplay experience (psychological manipulation tactics) causes a consistent and dramatic increase recurrent revenue streams.”

While acknowledging that the whole thing might be fake and maybe not even feasible for what it proposes, MMO game designer Raph Koster (Crowfall, Star Wars Galaxies) publicly pushed back hard against this concept. “This is horrendous,” Koster tweeted. “For what it’s worth, I have *NEVER* heard of a game doing anything even remotely like this. Let’s keep it that way.” Even so, as Koster says, the fact that people believe it’s possible should make us “[ponder] the level of unhappiness out there among players.”

So, I suspect this is fake. I think the tech isn’t feasible for the more outrageous claims.

So now I am on to pondering the level of unhappiness out there among players that so many believe that some of these crazy tactics are already in use. 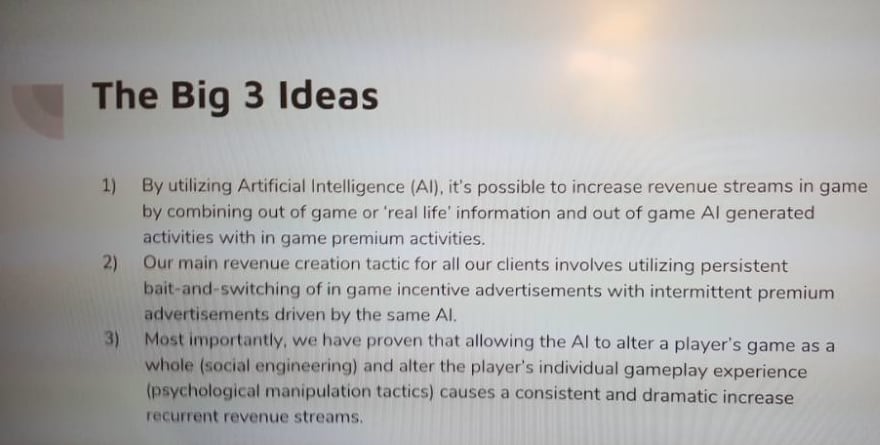