I remember my first time. Unlike many hunters, I didn’t stalk her. In fact, she bumped into me. I was just strolling down the beach, collecting some bugs and BAM! There she was. Larger than life. I was a little scared, and I admit I tried to hide in a bush. She saw right through it. She chased me a bit since, well, I was hiding in a bush, but admittedly, she was also a predator. She wanted me, badly, and I kind of wanted her. We moved from the beach to the forest and even went on a bit of a mountain hike where I was finally able to mount her. I gave a few quick stabs before pulling out my big sword, deeply penetrating her and finally cutting off her tail. Tail cutting is kind of what I’m into…

…eh? I’m talking about my experience in Monster Hunter World, of course. Although, come to think of it, some of the monsters are kind of sexy if you really think about it. You do want to think about it? Well, considering the season, I guess I can we can try a top ten of the sexiest monsters of Monster Hunter World. I’ve already consulted with one of our sexperts and veteran hunters, Matt Daniel. We had some deep(ly uncomfortable) conversations about criteria and decided to rely on our… um, “gut” instinct. I’ll be going beyond looks and dip into monster personality plus kink factors. There won’t be any discrimination between newcomers or old veterans, and all genders are welcome here. Just, um, no rotting flesh, no matter how great your personality is. Sorry, Odogaron.

Paol isn’t really sexy in a traditional sense. He’s small, cute, and quite fuzzy. Kind of like a cuddly little teddy bear, in bat form. Some people may find fuzzy and cuddly sexy, so who am I to judge? However, Paol puffs himself up in a balloonish fashion, trying to look big but fooling no one. A lack of confidence certainly takes away sexy points. 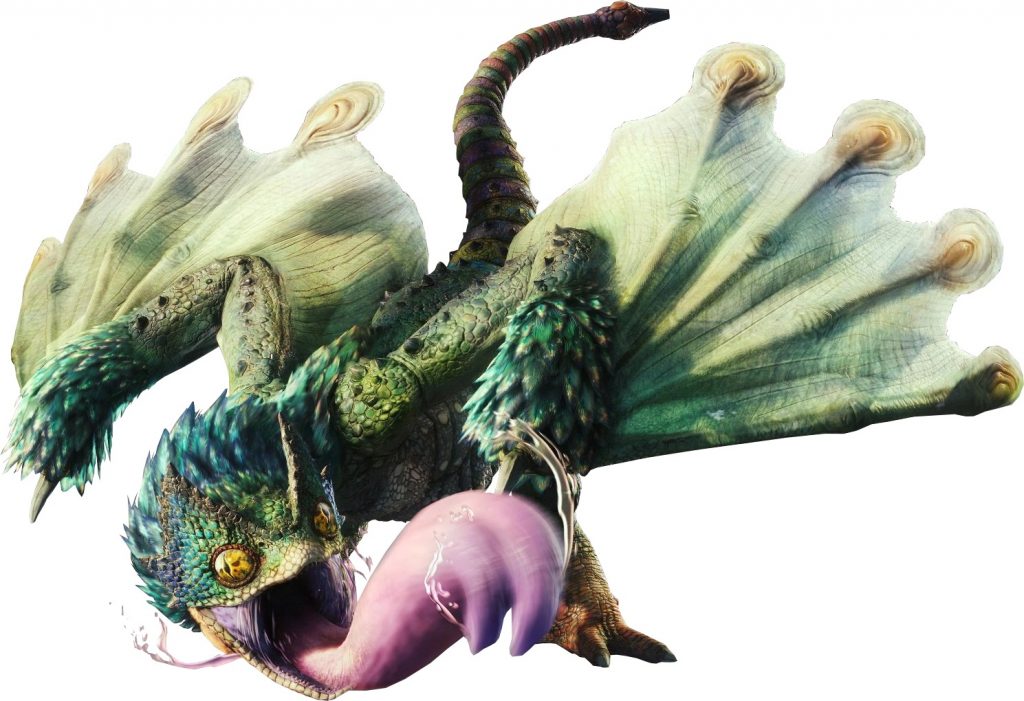 Pukei has some great features. Those colors. That tongue. The unique tail shape. Plenty of feathers. Did I mention that kinky tail is inflatable? And hey, she comes with a great pet name! However, that tail shoots poison mist. And she’ll spit poison everywhere. Those can be fixed with some antidotes and a trip to a hotel (sorry housekeeping!), but even worse, she loses points for wandering eyes. Nothing is worse than realizing your lover has one eye on you and the other one, well, literally scanning the room for her next partner and/or victim.

Jyura is mostly smooth. He’s the thick, muscular swimmer type that likes to coil up, wait till you feel safe and calm, and lunge at you to get your heart racing. Since he’s already into exploring thick fluids, you know he’s kinky, but he’s particularly into mud play.

Not the gross mud, but actual, dirt-based mud. Like, really into it. So into it that you gotta beat mud off of him to get to his baby-smooth skin. That might be fun sometimes, but man, when all your encounters are going to be muddy, you start thinking more about the clean up than your next encounter. While Jyura’s face is kind of cute, the rest is probably too fishy for most people, and monsters. Good show, though, Jyura! 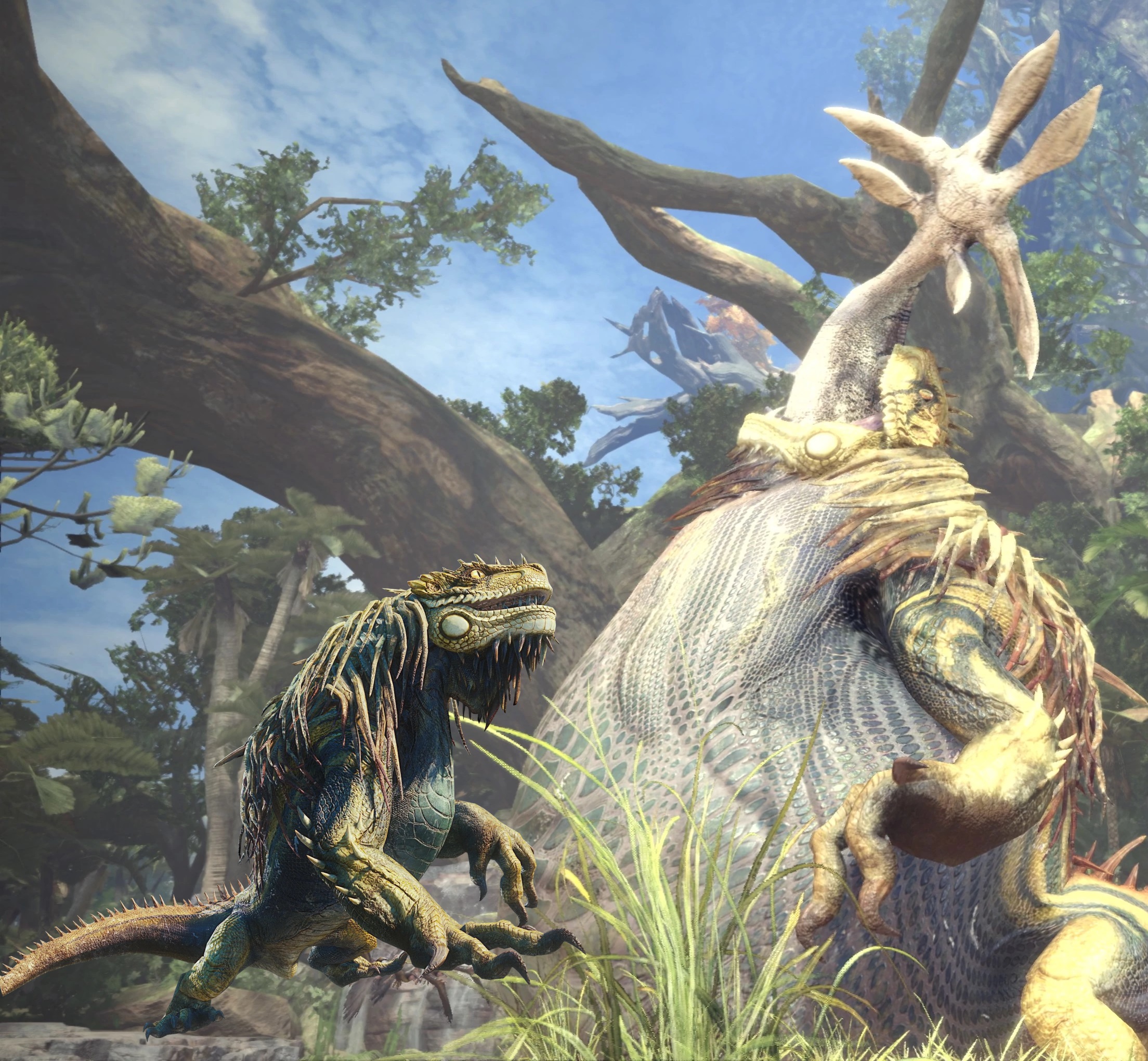 They don’t call her Great-J for nothing! Look at that hair! Few monsters can throw back luscious locks like that! She’s got a sleek figure for the folks into fitness, but she also knows how to plump up for those of us who prefer them thick. Like Jyura, she loves to play in mud, plus she’ll call in friends to help. Nice!

However, when I say “she knows how to plump up,” I really should say she’s, um, not a chewer. I mean, in terms of eating. Have you ever had a date unhinge her jaw and gulp down a steak? Ew, no. Sorry, but Great J’s poor mealtime manners means you’ll pretty much only want to be with her in bed, and since you’re shallow like that, she’s gonna probably want to eat you. I mean literally, you’re dinner. Negative sexy points for potential partner consumption. 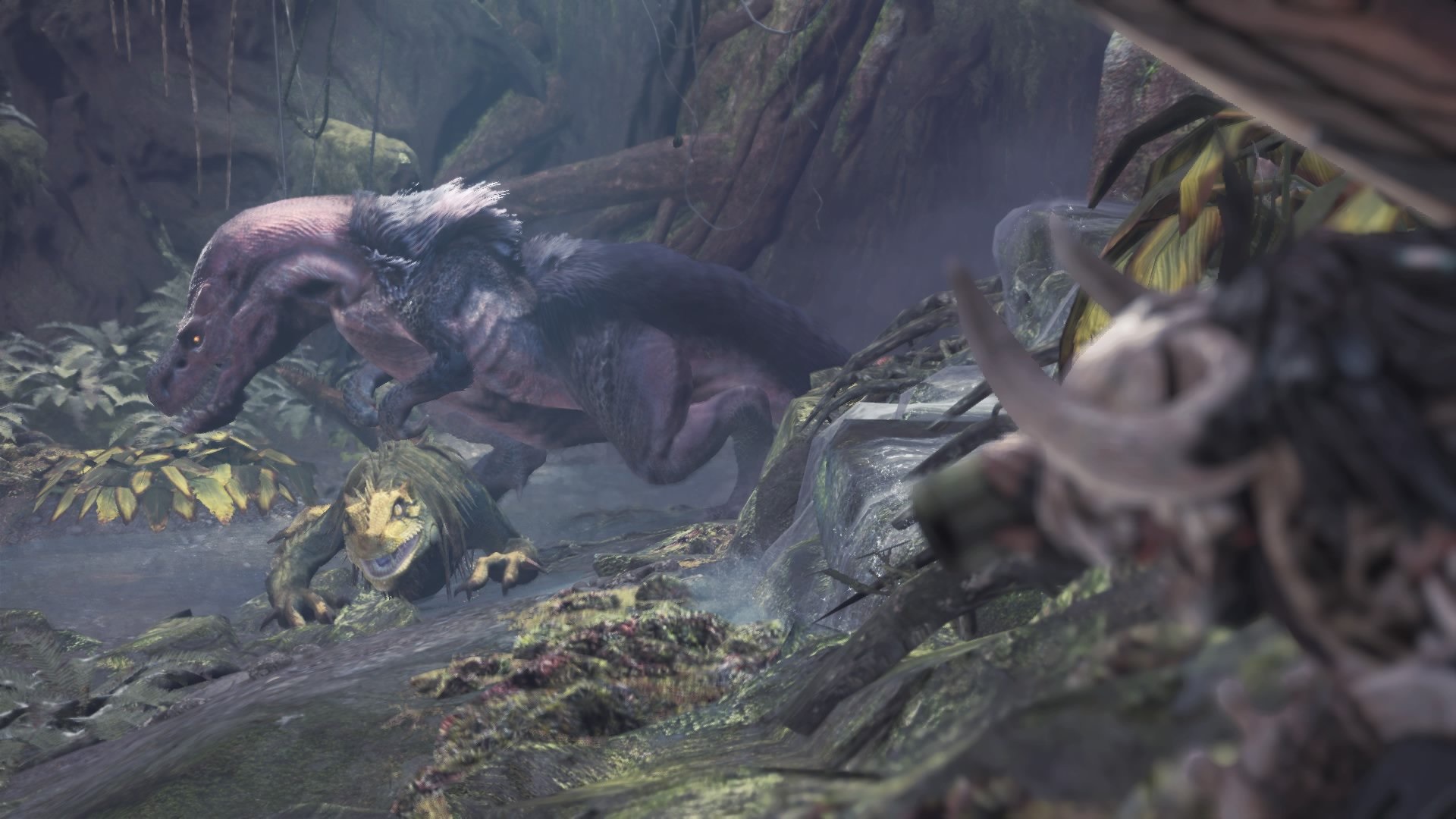 “Anja” was the first that struck me. As Matt pointed out, unlike a lot of monsters, she shows some skin. Just look at that bald head! Any woman who can rock that look has my, um, let’s say heart. She’s also got a stylish “fur coat” look about her, so she’s both punk and posh rolled up into one. She’s got a fiery temper to match her fire breath, is powerfully built, and has a ton of stamina. She seems like a good catch! However, she has this nose thing where it inflates like a hooded seal’s, and she leaves mucus everywhere. Maybe that’s hot in the animal kingdom so points there, but for humans, she loses a lot of sexy points.

Plus she bites. A lot. 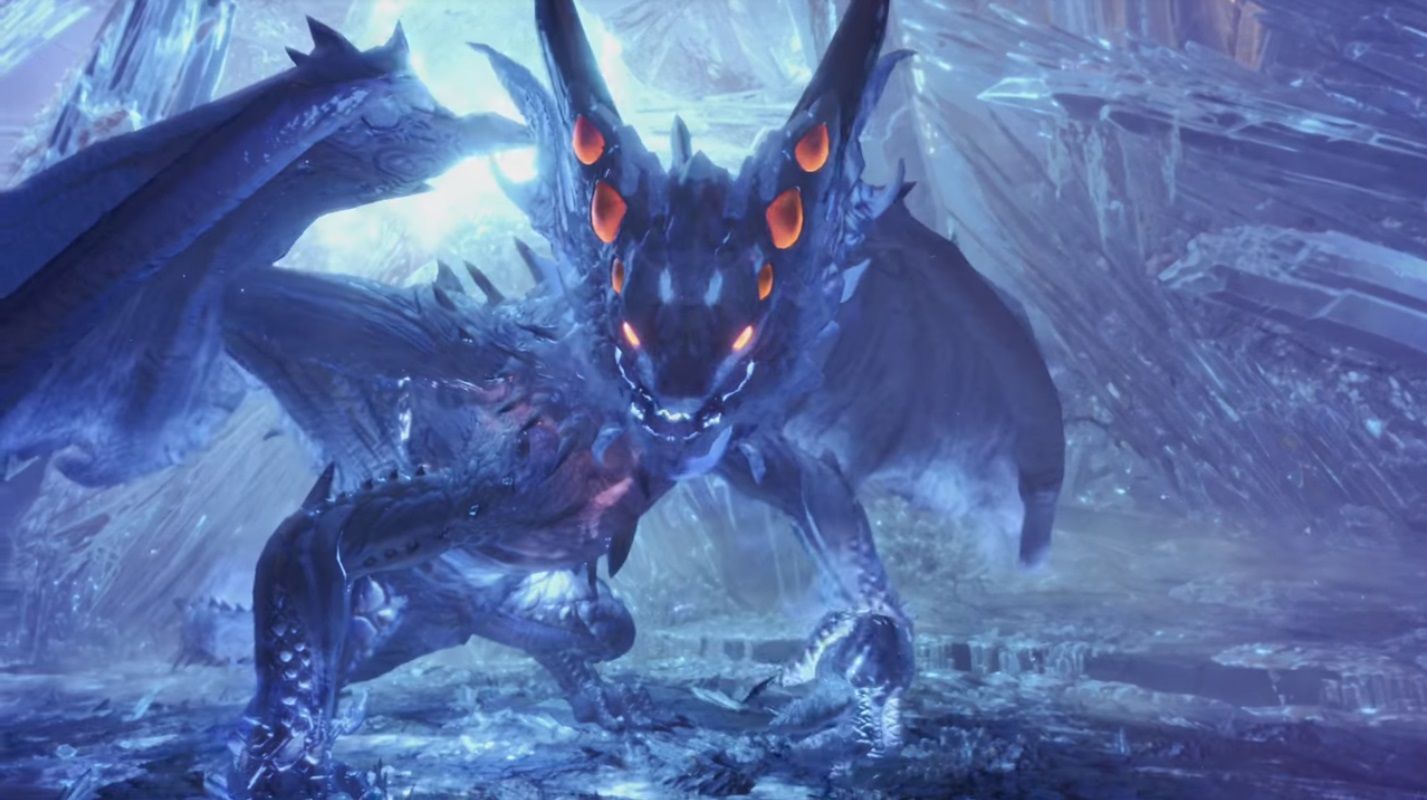 There’s a reason we call him Big Xen. Look at this guy! He’s absolutely majestic, glows in the dark, and is partially translucent like a super sexy sex toy. He comes equipped with a blue flame for setting the mood, plenty of eyes to watch you, and he’s textured. Even his scales and spikes look safe and smooth. However, even for you size queens and kings, there is such a thing as “too much,” and if that doesn’t scare you away, his temper should. See, he’s anything but zen, freaking out and burning holes in his own lair all the time, then tripping in them. Short tempers and clumsiness aren’t sexy. Sorry, Xen!

Tobi-Kadachi – it almost sounds like the name of a sex toy, right? “My girlfriend’s moving to Antartica for 6 months, but it’s OK since she imported me one of those Tobi-Kadachi from Japan!” Describing him only adds to the effect: smooth head, feathered tail, and slightly ribbed for your pleasure.

But it’s not just looks. No, Tobi’s got stamina and squirreliness with an electric personality that brings its own kind of kink. The only downsides are that squirrelly attitude can be kind of tiring, and Tobi’s more into hard electric play than the soft, gentle feather play. Ouch. 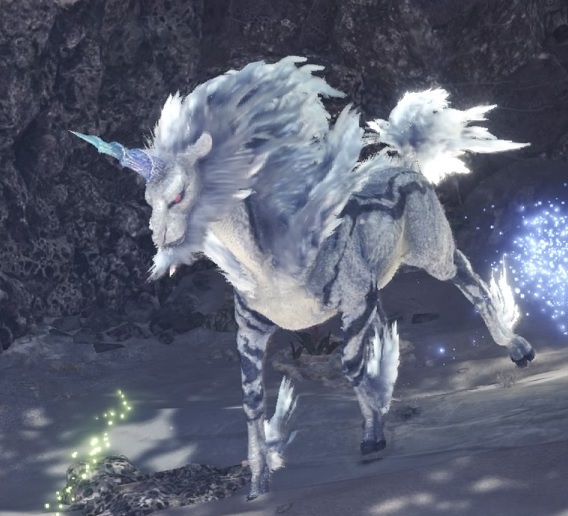 Kirin is our first non-MHW exclusive monster but… well just look at this majestic beast. He’s got that lion-ish face without the over-the-top-mane that screams, “I’m insecure about my masculinity.” He’s graceful, beautifully colored (I’m a sucker for blue), long-legged, all with an air of mystique. Plus the unicorn horn. Nothing says, “I’m a catch,” like being an actual unicorn. The electricity it emits gives it a bit of a kinky side, but I get zebra vibes from it. “I look pleasant to the eye, but I bite a lot more than my domesticated relatives.” Plus, again, let’s not ignore that electricity thing. It’s a bit common, isn’t it? And all these electric guys play too rough. You gotta be a hard M to want to play too much with Kirin. 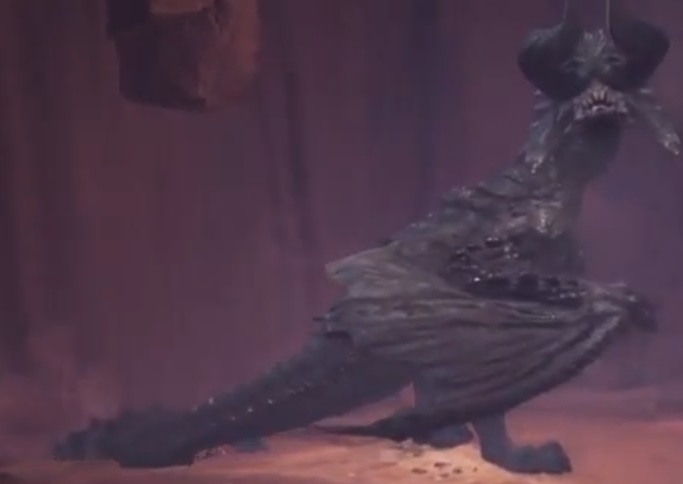 We need to differentiate between the two here. Black Diablos isn’t like Black Debbie and White Debbie, she’s more like your partner vs. your partner when they need a baby. She’s Diablos, but always female, turning black because she’s in heat. She’s got everything going for her that a regular Diablos (male or female) has going for them: two horns for double the phallic symbolism, high stamina, huge thrust power, a wicked tail, a love of tunneling and burrowing, able to play in the heat as well as the cold, and is an apex predator that will fight for your attention. Unlike “Nergi,” Dia is more studded than spiked, so the kink factor is also functional.

Now double that for Black Dia. Harder, faster, stronger. She even asserts her dominance over males when needed. Damn, that’s hot. There’s just one problem: Those horns are just for looks. She’s a little clumsy and tends to get them stuck in things. One wrong session and they crack right off. How embarrassing!

Legi’s got everything a boy (or girl!) could ask for. She’s smooth, graceful, and elegant, especially with those tail and head accents. She’s also very long, so you’ll need to be secure in your own body if you want to go after her, and you should, since she loves to curl up, she knows how to cool things down, and boy can she move! She’s vigorous as heck, constantly moving, twisting, turning, coiling and uncoiling, darting and weaving like the coy tease that she is. Not only that, but she’s constantly shooting out and covering herself and the terrain in frosty cool white stuff. No blazing killer fire or knock-you-out electrical shocks, just a cold blast that leaves you powerless against her desires. If that’s not sexy, I don’t know what is.

Tobikadachi is the best. I wish Kut Ku was in this iteration :'(

Now I feel like I need a shower. And I just took a shower.

Happy Valentine’s to you too Andrew and Matt!

Okay, I get why y’all don’t wanna give Odogaron any love… She’s a bit of a mess, kind of wild and crazy, and yeah… her place is full of trash and bugs. But rotting flesh? She’s a little raw sure, but that gal ain’t rotten! She’s wild, will tear up just about anything and anyone, but she’s also fierce and independent and unafraid of things even much bigger than herself! I’ve been cornered by a nasty thing with a habit of blowing everything up around them, when suddenly she comes howling through and tears into him!

Sure… she likely would of gone after me after that other big bad ran… but hey! We all get a little wild at times too!

Besides, she’s still much tamer than my first… Friends invited me to head out after picking up my bone hammer for the first time. We know this great gal, you’re sure to love her! We fly out, it’s dark and stormy… And there she is, flying in the air pink and radiant. I took a swing, bounced right off and she tore right into me… And came back for seconds! Pink Rathian is a killer queen, I tell you what.

Wtf did you just have me read Mr. Ross.

You don’t remember the one Matt, Justin, and Larry did? (NSFW!): https://www.engadget.com/2013/04/19/second-wind-roundtable-nsfw-edition/

My vote is the Roz Slugocrat.