END_OF_DOCUMENT_TOKEN_TO_BE_REPLACED
With a new Path of Exile challenge league every three months, you might wonder whether Grinding Gear Games can keep coming up with new themes for each one. And each quarter, it does! We’ve had leagues where prophecies add a random element to the gaming, where powerful rogue exiles turn on players, where secret golden chests full of loot are uncovered, and where portals open to a different dimension — just to name a few. The current league includes gaping fissures into the abyss. So what’s coming next?

For that answer, I sat down with Producer Chris Wilson to talk about PoE’s next update, which hits on March 2nd. If you’ve ever looked at any of the creatures in game and wished you could have have one of your own, the Bestiary league will give you that chance. Color me super excited! And if collecting creatures isn’t your forte, there is plenty more happening in content update 3.2.0. Read on for the whole run-down!

The Bestiary league melds Path of Exile with Pokemon. Thanks to all-new mechanics, you can collect the creatures of the world. When you come across one you want (and Wilson assured that basically every creature is fair game), you fling an electrified net on it in hopes to subdue it for capture. Obviously you want to make sure that none of its friends are still around to interrupt your work! Warning: The beast will continue to try to break free, and possibly will multiple times. Players will just have to continue to weaken the creature and throw nets until they succeed, or the player or creature dies from the fight. Upon success, a new NPC will emerge from a portal and whisk your newly captured prize away.

So what happens once you have captured these critters? Where do they go? Where it goes is to your own personal zoo. Your acquisition is transported into a cage in a new special area for each player called the Menagerie. Players and their friends can meander through this zoo and admire their collection. But there’s much more possible here than just putting your prizes on display. Your collection is at your disposal for crafting. 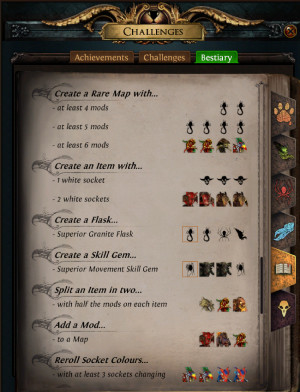 These captured critters are essential to the new crafting in for this league. As part of the system, players have a bestiary that keeps track of everything that has been collected. This permanent book marks off what you have captured as well as how many you have, both integral aspects to what is dubbed beastcrafting.

In beastcrafting, players select certain animals to sacrifice from their collection in order to upgrade an item or make cool new ones. The sacrifice is quite a bit more than just clicking a button, however! In fact, you’ll face those four creatures in a small combat arena in your menagerie called the Blood Alter. If you win this sacrifice by combat, you get the item/upgrade. If you lose, you don’t. In both cases, you lose the animals that were sacrificed. Hey, if they slaughtered you, it is only fair they win their freedom, right? If you worry about your chances facing all four foes, Wilson noted that you can invite friends join you for the fight.

How many crafting combinations are there in beastcrafting? Wilson said that there are 250 regular beasts and 40 new legendary ones to capture, meaning there are ton combinations of crafts possible. Wilson called legendary creatures “souped up versions of existing monster types that have new abilities and are much more dangerous.” These new legendary beasts are the backbone of the crafting system. “While you do want some normal monsters,” Wilson explained, “you’re mostly caring about capturing the legendary beasts.” He also assured me that they aren’t too rare; he indicated that players will see a few a day. The rarity will be more of the players finding the specific legendary beast they are looking for!

Point of note: The creature in your menagerie and available for crafting is the exact creature you captured, with all its properties, not just a standard representation. This means that you can take beasts with corrupting blood and use them to add a special corruption aspect to an item. Wilson also revealed that in this case, if you succeed, the random corruption outcome would always be positive.

“We basically wanted to have every interesting type of crafting that’s possible in Path of Exile have a way to do it with beasts,” Wilsdom told me. “And typically it will be easier with beasts.” He gave two examples: One, beastcrafting with the right set of beasts can also grant players access to special spirit boss encounters. Not only are these four end-game foes quite difficult, but they provide impressive new unique items as rewards. Also, you can capture the spirit boss and use him for crafting or display! Two, players will be able to craft an imprint, which is a form of the old eternal orb that let players back up an item before you altered it (allowing restoration if the item did not turn out as desired). The imprints will be usable only on blue magic items. The power of items will depend on the power of the monsters used in crafting.

Speaking of unique rewards, the Bestiary league also includes the game’s first actual sets – four sets of items you can get from killing the spirit bosses. Wilson emphasized that players can mix and match them, both for unique looks and for new builds. “Our number one goal here with the set items is to make sure there is no right answer for how many pieces you use,” he explained. The pieces synergize in different ways. He described the core concept of the crab set is that there are things called crab barriers that are defensive growths on the armor that accumulate and get broken off when hit. The different pieces modify how the barriers work in different ways. Players who want the crab barrier properties on their own items can beastcraft them on using the spirit of that specific boss. These armors also have very distinct looks and can be skin transferred onto items you want to wear. 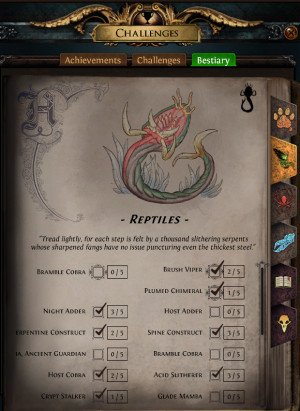 As always, the new challenge league is just part of a larger update that adds more to the game as a whole. Update 3.2.0 builds on the story the War for the Atlas. In this update, endgame players who complete the Atlas will have the chance to find out what happens after restoring The Shaper’s memories as well as see what is behind that locked door that has been taunting player at the Atlas. Spoiler: It is The Elder’s Orb, which lets players upgrade any map on the Atlas to the highest tier. Players also get the chance to face both The Shaper and The Elder together! Since The Shaper was the most difficult fight in the game and The Elder was the second-most difficult, imagine the two of them together with their abilities firing off simultaneously! It was pretty amazing to watch. (You can see a clip of the fight down below.)

There are also gobs of new goodies to collect at use. Wilson demonstrated two of the new support gems, Summon Phantasm on Kill and Spectral Shield Throw. Both look very interesting for creating new builds. The summon gem means projectile-throwing minions are spawned automatically without the player having to stop and do it. On top of that, the minion can get whatever properties other minion gems give it.  With the shield throw, players will get to do exactly that. Wilson explained that the damage from the shields will be dependent on the armor value of the shield, meaning players will have to start paying attention to that stat, which a big departure from current play that focuses mainly on mods and properties. Shield fragments also travel for a set time instead of distance, so players can manipulate that time. Besides new support gems, there are 29 new unique items, and prophecies can transform your items into one of 30 new fated unique items.

Additionally, this update includes an Ascendency class revamp. While the 19 specialty classes got a tune-up last summer, Wilson stated that over time, the balance has gradually shifted and only eight or nine of the classes are now considered popular or viable by players. To combat this, the “bad” ones have been buffed up to make them more appealing and viable again. In addition, these classes are going back to their class identity roots. Wilson explained that the exclusiveness of the Ascendancy classes has been watered down over the years, but now the team is adding mechanics to each class that will only ever be a part of that Ascendancy class. This will bring class identity back. Wilson also feels this will add lots of replayabilty to this release as players want to try the new mechanics.

And finally, for folks who will miss the ending of the Abyss league, Wilson said that the abyssal fissures will be added into the base game starting in Act VI. And for those who already anticipate missing all the creatures they have so carefully collected, Wilson said players would likely get to keep their menageries, although it isn’t a promise. The plan is that the menagerie should merge in some form to the core game with all progress intact. He added that the crafting, however, will need to be altered to be not as powerful. If the zoo is kept, that also means that every subsequent league will have it, and at the end of each league, it will merge into the core game and combine with all other bestiary progress.

A few other facts we discussed had to do with the game as a whole. Wilson shared with me a chart that showed the growing popularity of the game since 2015, including the exponential growth of hours of Path of Exile played over the past year. Time played jumped from just under 200 million hours in 2016 to over 400 million in 2017! Over 3.5 million players (including me!) logged hours in The Fall of Oriath expansion. And notably, the average play session for Path of Exile is five hours! Wilson attributed some of the growth to the fact that players can reliably count on the four content updates a year, which gives then new content. “By the time they are finished playing the existing stuff there’s more for them to do,” he said, “and that’s working really well.”