It was the best of early access, it was the worst of early access. We needn’t even stop there: It was the age of wisdom and it was the age of foolishness as well! I venture to say that Dickens didn’t know he would be so on point in relation to video games. As much as I know players are disappointed about the announcement from Conan Exiles that multiple anticipated features will not make it in for launch (trust me, I’ve been looking forward to them as well!), I actually really appreciate the decision. You see, I have already experienced the maddening delay of “just a few (hundred) more features before launch” and I lost heaps of respect for the studio that went that route. A studio, I might add, that was the epitome of doing early access right for a long while.

In this week’s edition of The Survivalist, I’ll juxtapose these two examples of early access in the survival sandbox genre and show how Conan Exiles’ latest announcement secures this game the title of doing early access right — a position once held by the other.

Once upon a time

Once upon a time, a long time ago, there was a studio that entered the survival game genre that blew me away. Beyond being a fun and engaging game (even filled with bugs), it was developing at a phenomenal rate. While other early access games languished for years, this one had multiple patches — too many to keep up with even! It wasn’t long before this game had many, myself included, convinced that someone could actually do early access right. Look at all these bug fixes! Look at all this content! Look at all this dev involvement and communication! Finally, a project that didn’t feel like it was grabbing your money and running. I held the game and studio up as a shining example.

And then it fell from grace. Perhaps the weight of the crown was too much?

As the years went by – and yes, we do mean years – launch was pushed further out over and over again. Instead of focusing on eliminating long-standing bugs and polishing and optimizing the game for launch, devs instead kept dumping more and more content into the game. Now, more content is an awesome thing, but it can definitely have drawbacks in certain situations – situations like creating even more bugs and breaking previous systems. Situations like delaying a promised launch time and time again. Situations that make you doubt the integrity of the studio and lose any ability to believe what it says. Launch was beginning to feel as much like a fairy tale as it was for all the other early access titles. The crown was definitely slipping. The declarations that we so loved hearing at the beginning seemed to mock us now:

“Our pace of updates will slow down a lot as we get towards release, as we don’t want to be iterating on new stuff as we try to polish the game.”

“We don’t want it to be one day we release, and we just turn a switch and people are like, ‘Wait a minute!’ We want there to be a definite exit to early access and then release a very polished game.”

Then it got worse. The final blow that knocked the crown of early access king off this title was when the studio offered a paid expansion before even launching the game! Never mind all the folks who paid to get this game to launch; now they have to pay more to get the other content being developed – developed with the money these folks already supplied! That once feeling of not being a money grab was lost.

To be fair, launch did finally happen in summer of 2017, two years after the early access started, a year after the first announced launch date, three days before the second paid expansion was revealed, and only a couple of months before said expansion launched. But by then, many players had already lost faith in the studio and left the game.

Now, this is a story

Now, this is a story all about how early access got flipped-turned upside down. Another early access title joined the scene in January of 2017. Instead of featuring dinosaurs, it offered the gritty world of Conan the Barbarian. An awesome setting for fans, but folks have been be burned plenty of times before by early access. Even those studios that once appeared to do it right eventually veered well off the path. So I can safely say there was plenty of skepticism; I indulged in some myself. But so far, Conan Exiles has shown itself to be a contender for the crown. 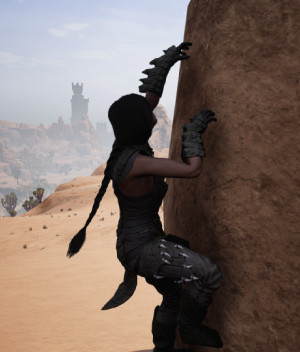 While never quite at a breakneck speed, Funcom has added regular content to the game, tapering down from the nearly daily updates to a more reasonable cadence; the initial plan was small updates every week or two with larger mechanical updates every few months. And updates came, from balancing and bug fixes to emotes and dungeons to decay and weather systems. I personally love the climbing mechanic! Player modding was also added early on.

Wait, what’s this? Conan Exiles also got an expansion during early access! Oh, but this major content influx was completely free to all past, current, and future supporters. A whole new zone, new dungeons, and new items. Free.

Things haven’t been perfect. Devs have made blunders (and talked about them) and several delays for sure. And the latest announcement of leaving out some incredibly popular and much-anticipated features for now in order to make launch is sad. I want mounts, pets, and sorcery like nobody’s business! But the keys here are “for now” and “make launch.” Funcom is delaying launch indefinitely just to add “one more thing”; it’s doing its best to stick to a hard launch. I respect that. Even more, the devs aren’t avoiding the topic: They have come out and explained the hard decisions to fans.

“Some features or content simply ended up not being good enough, some things have ended up not making sense for the game, some things have been replaced with other features and content, while some things just turned out to be out of reach from a technical or development capacity standpoint. When you’re closing in on launch you must make some difficult choices and we’ve been doing a lot of that during the past few months.”

These desired features are not being cut but just delayed (although in the case of sorcery it apparently has to be seriously reworked; some elements of what was to be sorcery, namely fast travel and explosive and poisonous gas orbs, are making it in for launch). And perhaps the most important of this is the bolded statement that if/when any of this content it makes it into the game it will be completely free and not gated behind some paywall. Free.

“What we do want to make very clear is that we will never lock features we have talked about for Early Access behind paid content updates. If at some point after launch we can implement mounts, sorcery, or any of these features that we wanted to introduce in Early Access, we will make sure these are available freely to everyone.”

It’s as if devs appreciate supporters! That’s more than we have felt in other cases.

And there is more. Quite frankly, my appreciation Funcom’s approach to early access did hopeful backflips when I read, “we decided to prioritize polish and other features ahead of launch.” Did you see that? Prioritize polish? That post said it more than once. And it is being said at the end, not just at the beginning. Something fans asked for repeatedly from the previously mentioned game that never seemed to be realized was being prioritized here.

Yes, Conan Exiles picked up the crown. Will it keep it? The proof will be in the pudding. If launch were a pudding. The crown could fall from here as well if launch and all we’ve heard here doesn’t happen; it’s not like we haven’t heard promises broken before. But so far, I am inclined to believe. Funcom hasn’t given me cause to doubt the development of this game. There are those who hate on the studio, and their unhappiness can be understandable. In this case, however, the studio is doing right. And man, do I appreciate that.