END_OF_DOCUMENT_TOKEN_TO_BE_REPLACED
Watching any Hearthstone video is always a weird experience for me since Blizzard’s Ben Brode looks and sounds and acts exactly like my brother-in-law, but the latest episode of Hearthstone Chat is definitely worth five minutes of your attention. After recapping last year’s releases, Brode announces what Blizzard is calling The Year of the Raven. Past years had their own animal mascot, as well as three expansions, and this year will be no different.

The first of these expansions, Brode says, will be revealed “real soon,” though he shows a teaser image of all three (expect druidy and arcane things in the future, in other words). There’s a new druid hero card on the way for standard format, plus the requisite shift of cards to the hall of fame. Maybe the coolest bit is that Hearthstone is finally adding a custom tournament mode.

“This feature will help players run a Hearthstone tournament from their own home or Fireside Gathering. Players will be able to create a custom tournament and invite friends – all from within the Hearthstone game client. [We] will begin with handling matchmaking and checking decks, but we’ll continue to add new features and functionality over time. We’re planning to launch in-game tournaments as a beta around the middle of this year, but that will just be the beginning as we expand on this early version of the feature.” 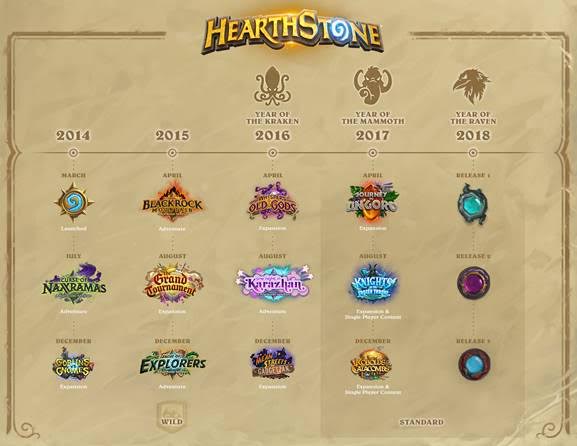 As much as I enjoy Hearthstone, I find that TESL offers greater depth and diversity.

Battle Bards Episode 195: In the mountains