END_OF_DOCUMENT_TOKEN_TO_BE_REPLACED
Admit it: Ever since your faction handler in Secret World Legends started sending you off on jobs, you’ve wanted your own underlings to boss around. Am I right? Well thanks to the conspiracy game’s latest feature, now you do get your very own minions to send scurrying off on little assignments. Called the Agent Network, this new system was just deployed this week. And while it’s neither a massive story feature nor a hefty progression feature, it does have a bit of both.

Go ahead, dive on in and start ordering your minions around! With this guide, you’ll have all the info you need to be running your very own agent network.

Agents: A little something for everyone

After waiting so long (and still waiting) for Season 2 and more story content, many fans will be eager for story and therefore be disappointed, even exasperated, when story doesn’t happen yet again. That doesn’t mean adding other features is bad — it’s just that story is wanted so much. I didn’t actually think I would care much about this new feature. Turns out I was wrong: The Agent Network actually incorporates story and progression. There are even a bunch of new related achievements to earn! It’s a little something for everyone.

During the big explanatory dev stream, systems designer Andrew Ryker said, “We wanted something to kind of go along with our next big content update. This is another avenue to progress your character.” Progression is well and good, but I am admittedly much, much more interested in the story, so his other comment really made me perk up. The agent network was intended to be about “having an engaging system where you can experience more of the stories and more of the other stuff that we weren’t particularly going to be doing a big content update about.” Experience more stories? Sign me up!

After spending a few days with the system, I am actually excited about it… and that’s because of the story involved! Yes, progression-wise it offers rewards like anima shards and frequent distillates with no real effort — a pretty sweet deal when you are a low level. And the rewards just get better the higher the agents’ levels get. Leveled agents also provide players with special passive abilities. But the fact that the missions are snippets of story from all around the world is awesome. It’s like being handed shiny lore without having to hunt for it. Not only do you get to learn a little something extra about your agents (which, when you consider you can have Hayden Montag and Carter as agents, how could you not want to learn more?!), but it also expands the story of the Secret World beyond the perimeter of the playfields. As much as I might want to experience the entire world as zones, I know the devs can’t deliver that! Through agent missions, I’ve gotten a taste of happenings in Scotland, upstate New York, and more.

True, the mission stories aren’t super involved. However, there is volume! I don’t know how many missions there are total right now, but there are a number of them already. And due to the nature of the snippets, creating them should be easy enough that we can have a huge replenishing supply that doesn’t end. That means lots of little story tidbits about familiar faces and places as well as new ones. I honestly can’t wait to learn more. I am also so excited for how this could be incorporated into events and holidays.

Be a boss: Getting started

That was some why; now let’s get into the how. In order to be the boss, you need some agents. When you reach faction rank 3 (level 15), the agent network opens up. You get a text from your handler that brings up a spiffy UI window explaining the gist of the feature and puts an agent dossier in your inventory. Click on that item to add the agent to your agent UI (which is accessed by pressing P). This UI has everything you need for the agent system, from storing the agents to displaying stats to offering the missions.

When you are first eligible, you are gifted one faction agent. Other agents can be acquired as a mission reward; every action and sabotage mission from Savage Coast onward has a low chance of granting one. There are also agent booster packs that can randomly award one. These packs are purchased by clicking the green plus sign on the top of the agent UI window. I anticipate that these bags and even agents themselves could be offered as log in rewards during events and such. Note: Agent dossiers, before they are claimed, can be sold or traded with others!

What does that symbol mean?

So you have your agent, and now you are looking at the agent network UI. What does it all mean? Since some of the symbols don’t have tool tips when you mouse over them (I wish all did!), here is a crash coarse in what everything on the page means. The UI is broken into three parts.

On the left: Missions

The missions themselves are on the left side. There are currently two usable slots; one is open to everyone, and the other is open only to patrons (as noted by the bee). The third is locked. Clicking a slot reveals the list of available missions. Each available mission has info at a glance, reading from left to right (with the title at the top):

When you click on the mission, you get the story snippet on top, a larger look at reward possibilities (and bonus rewards) in the middle, and the agent assignment on the bottom. Right above the deploy agent button is the list of mission requirements listing minimum stats and tokens (here’s where the intel, supplies, and assets come in) as well as the mission length in hours and minutes. Note: This timer runs down in real time, not game time or played time, so you can just send your agents off and play or log out and they will still do their task! Select an agent from the center section that best matches the needs and hit deploy. That agent is now dispatched on a mission and unavailable until the timer is up. If desired, you can also pay aurum to speed the process up. One agent can go on one mission per slot.

This section also includes tabs on the top. Each tab has a different set of available missions to choose from. Although you start with just one, there are six in total: five numbered tabs (mostly of increasing difficulty missions) and a special tab (which has a weekly mission).

When a mission is complete, this is where you click to view status report (more story snippets!) and collect your rewards. There are three levels of mission status, each with ascending chance of better rewards. Mission complete means it was done, but not necessarily well. Mission success is the mid-level and offers a better chance at the better rewards. The top tier is mission outstanding results, meaning the job was done very well and you can get an additional reward. 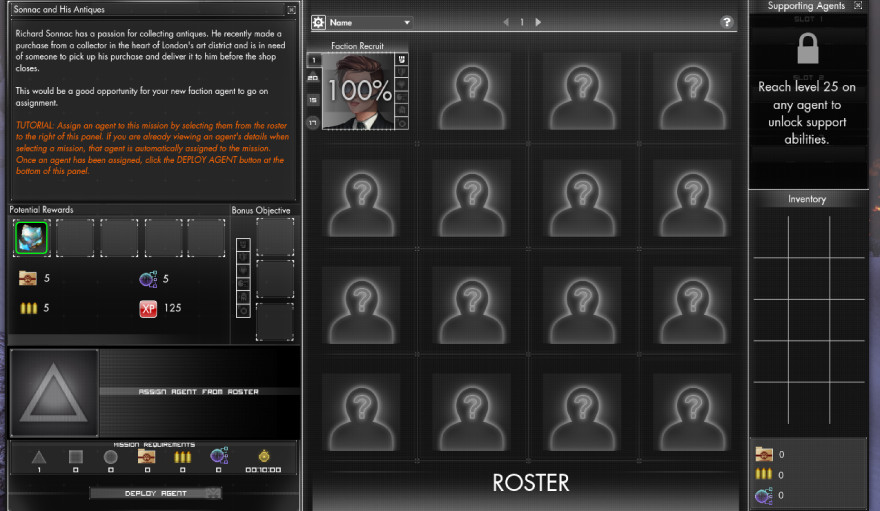 In the center: Agent Roster

In the center is your complete collection of available agents. You can sort by name, level, or the individual stats. The gear icon also allows you to show or hide agents using other filters. Here you get a quick overview of every agent and his or her stats via a portrait. Without tool tips, you may never know what the traits on the right are by their symbols, unless you happened to use the filter feature. Although I may not know what the symbols are supposed to be, here is a cheat sheet by what they look like to me:

To learn more about each agent, click on the portrait to bring up the full dossier. Now you get the background story snippet, the labeled stats (in case you forget what each shape meant), a gear slot, the agent’s traits (with a tooltip offering a tiny snippet about the agent), and the support abilities the agent offers.

When considering an agent for a mission, a percentage will appear on the portrait. This is the affinity, meaning the combination of your chance to crit (for mission result) and chance to get an item from the mission. The higher the percentage, the better the match. When an agent is on a mission and unavailable, the portrait has a blue overlay of someone running (errands, I presume!).

On the right: Supporting Agents

On the top of this final section is where you slot passive abilities earned by agents. This won’t unlock until any one of your agents hits level 25. The agent inventory is under that in the center. At the bottom is the wallet for your agent, showing how much it has earned in intel, supplies, and assets.