Today is the day we’ve been waiting for: After a short delay, episode 2 of Guild Wars 2‘s fourth Living World season, A Bug in the System, is finally ready to release. It feels as though Daybreak was a lifetime ago after being spoiled for so long with super-fast episodic content drops throughout the Path of Fire story, so I’m delighted to finally get to grips with some new story now. I had a little glimpse at the action two weeks ago in a dev-guided preview and was honestly left jaw-dropped, so it’s been exceptionally difficult waiting for its release to talk about my impressions. The episode is dangerous, political, and impactful, and I am just about hanging onto my seat as I get to see more today.

In this episode of Flameseeker Chronicles, I’ll recap on Daybreak’s content for those who haven’t quite caught up before launching into my first impressions of A Bug in the System. I played for around 45 minutes with some key developers and have only had a glimpse at the content, so this article will be a nice teaser for today without spoiling too much more than the trailer does. Having said that, if you would prefer to go in fresh, give this one a skip to avoid potential spoilers until you’ve played yourself.

I’ll keep my Daybreak summary brief so save space for more discussion of A Bug in the System: If you need a better breakdown, check out my deep-dive into Daybreak for a fuller picture. The key action to remember from Daybreak is fairly simple: The main focus of the episode is locating Kralkatorrik and Aurene to determine the effects of absorbing all that Balthazar magic. A brandstorm hits the city and, while investigating the cause and helping Amnoon’s citizens, the commander notices a much older looking Aurene tangling with a particularly dangerous seeming wyvern, who eventually rounds on the commander too. She gives the commander a vision that leads the party to track the Sunspears in the Astralarium in Istan.

Once there, the commander is repeatedly reminded that Joko has placed a high price on the party’s heads, and it transpires that the scholars have been altering the history books to favour Joko, literally rewriting the accounts told there, so the Archivist has a secret archive of the actual accounts that happens to also be the Sunspear base. Archivist Salwa is scared to assist us and grant us entry, but once we prove ourselves we gain access to the Sunspear base in the hopes of gaining access to Fahranur, the city from Aurene’s vision. It transpires that the only person who can help has been captured by the Sly Corsair family, so hijinks ensue in which the Commander bests a Sunspear Champion for a coin with special significance to the family to barter with, then we prepare grog, voluntarily get thrown into jail, and let Sayida Sly hand us over for our bounty so we can jailbreak Zaeim and get access to the city.

The plan doesn’t go smoothly due to our communicator: Taimi pipes up at the wrong time and the commander is knocked unconscious. After the jailbreak, a pained and terrified Taimi is heard on the communicator alongside a voice that sounds like Joko and we chase off to Fahranur to free her. The city is crawling with Awakened and tracking her down is no easy task: Eventually, however, the commander stumbles across clues and, more curiously, Inquest bodies, until eventually a furious Braham saves our lives from a cave-in and berates the commander for risking Taimi. Eventually, we rescue Taimi from Scruffy: She is slowly suffocating and we are forced to destroy the suit because it’s under the control of an Awakened Inquest message who is acting on Joko’s behalf.

A small note on the trailer

I just had to write a few short words about that awesome trailer: I knew that a marketing rethink was on the cards for ArenaNet, but I’m seriously impressed with the output and have to say that the trailer was totally worth the wait. It manages to capture the feeling of my first impressions very accurately: It gets in the humour of the narrative while also getting to grips with the difficult themes of the episode. I adore what the audio does to elevate this trailer, I am totally on board with the interesting angles the video takes, and I love the use of colour and composition to set the theme. The video makes clear what is new and get the story hook in there in 20 seconds flat: More of this please, ANet! 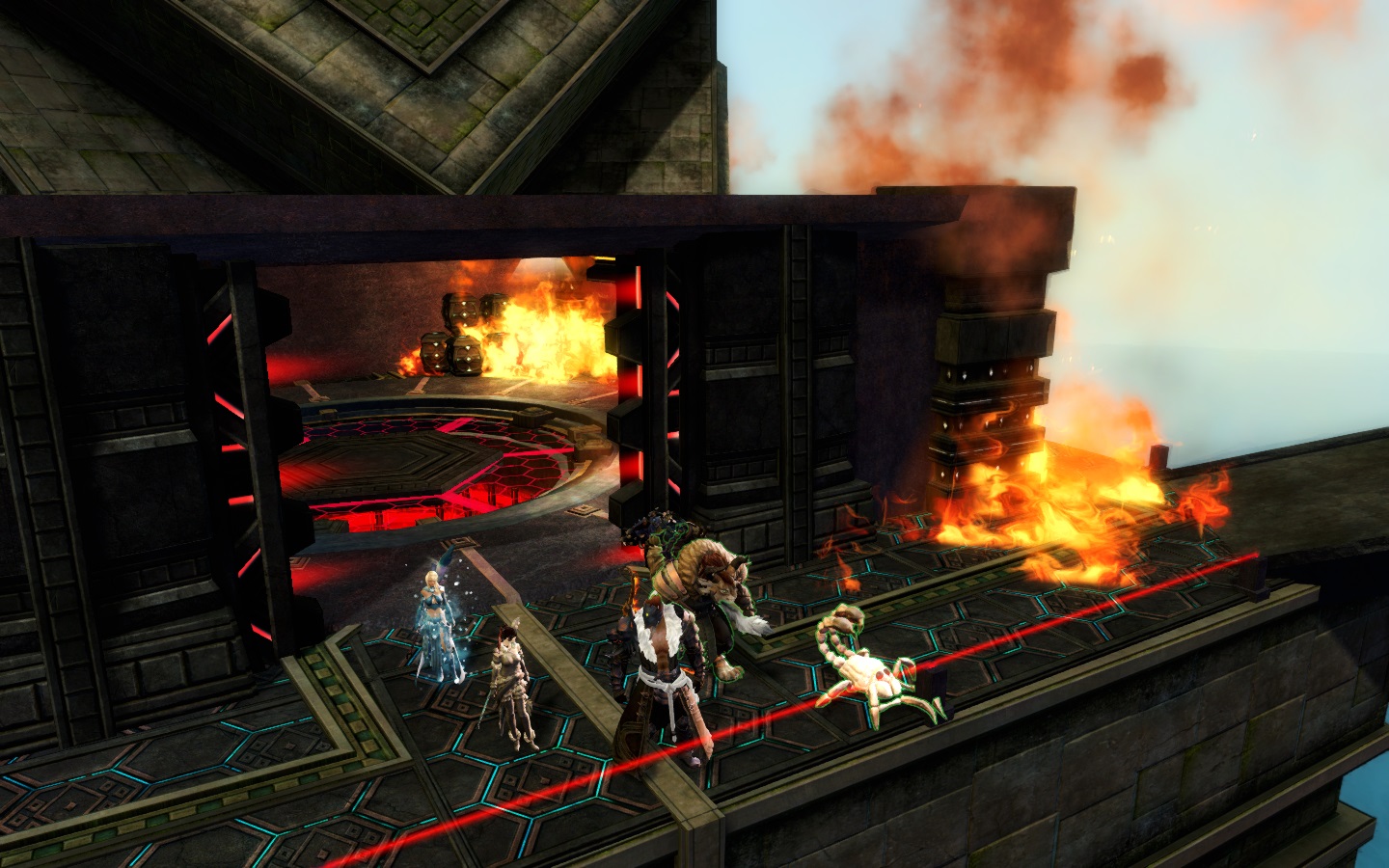 Into the lab: The Test Subject

My playthrough experience began with The Test Subject, an early chapter in the episode that picks up on that Inquest thread that has been carried through the previous story drops. The commander enters a lab that Rox dubs Rata Primus in search of information about Joko’s invasion force and Taimi notes that the base is said to be huge and could span across several buildings. There is an instantly sinister feel to the location and this is intensified by the dangerous antics we get up to as we venture forward and my the sarcastic humour of the Inquest communication, but I’ll let you experience that for yourself when you play through the episode. The player is presented with a subtle choice in how best to explore the lab: James Bond levels of espionage in which you avoid detection where possible is one option, though Rox and Braham prefer the more direct approach.

No matter how you choose to experience the lab, you’ll eventually uncover its horrors: Live test subjects are contained here, including some Charr, and it seems as though the Inquest aren’t too picky about keeping them that way. We eventually meet a mysterious Charr on our investigation who helps us deal with a rather violent Inquest golem security system that responds to any security breaches on the researchers’ behalfs and directs us to the main complex. As we’re moving through the lab, a distress message is received from an Asura Taimi knows who is in said main complex, and she’s shattered to learn that he is working for the Inquest. The message itself won’t play, but the title is Awakened Attack so we can clue together what is happening. Gorrik is known to Taimi as an entomologist, so this fits with Taimi’s theory that the lab has a particular interest in studying insects.

The party, including our new mysterious Charr friend, are forced out of the building and onto the roof by the radical decontamination protocol used by the Inquest in times of crisis, which seems to be blowing the lab to smithereens and running with whatever research the surviving researchers can carry. Cue a wonderful action-movie type race to jump off the building and to safety from a huge explosion while we also free any healthy specimens left in the lab: The visual payoff is totally worth it and I loved the little bit of excitement. The party crash down on a beach and this is where our playthrough leaves the story and moves on to basic map exploration. 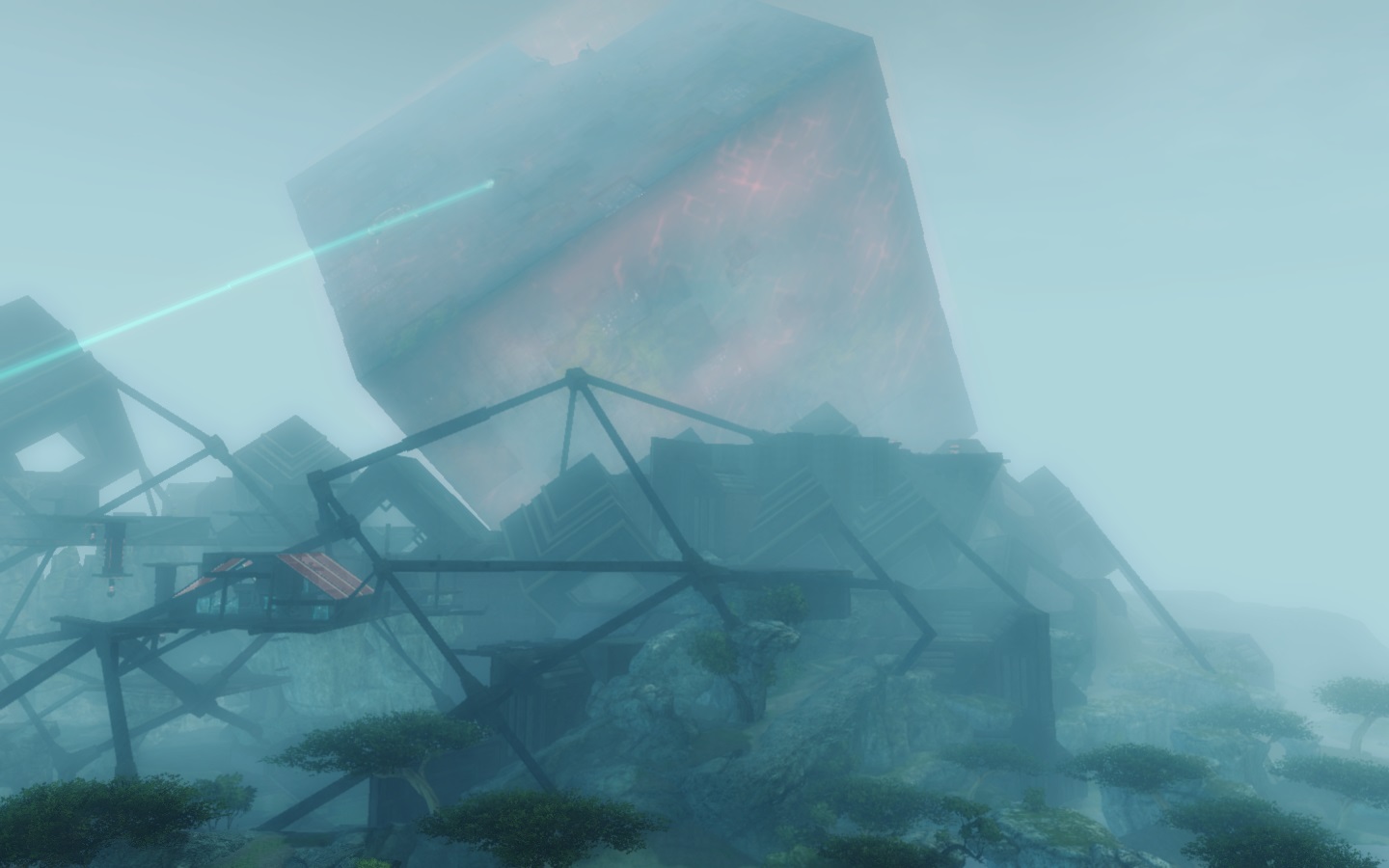 I am deliberately not going to tell you too much about the new map because it’s worth discovering for yourself, but I’ll leave a series of tidbits here for those who have no interest in exploring the episode’s contents themselves. In broad strokes, the new area is the Sandswept Isles and much of the same mount-led communities and bounty boards will be found here. The most interesting discovery here is the Olmakhan tribe of Charr, who is very visually and ethically distinct from the Charr characters we know and love. These peaceable, nature-revering farmers know how best to use the land for their benefit and live a simple rural life, at least until the Inquest and Joko start to rock the boat.

The weather systems of the Isles are of most interest to me as gathering storms have great meaning on this map. Once a storm gathers, rampaging elementals must be defeated to restore order, which is no mean feat when they span across a map as large as this one. We ended our playthrough being sucked into an elemental storm while trying to slay a cluster: This was a mammoth undertaking and we didn’t succeed in the task with our tiny party, but I highly suggest tucking your toon partially behind an outcrop where possible to prevent being sucked in and killed. I managed to survive the full encounter because I was playing on a necromancer build with a nice survivability factor, but I won’t comment on how many revives I handed out to my downed teammates!

The map is truly stunning, as we’ve come to expect over the last year or two. The weather patterns, dynamic skyline, and archipelago-type vistas will blow you away in a similar fashion to when we first explored the city of Amnoon. The new Charr aesthetic is worth mentioning as it coincides with more options being opened up to players when designing their characters, and you might also notice a visual upgrade to the golems within Rata Primus too.

All things considered, I can’t wait to get to grips with the map today and see what else is in store for the adventurers. You’ll notice from the screenshots above that a wonderful Asuran structure lurks in the skyline, so I’m sure this episode will take us back to the lab to find out more now that the immediate decontamination sequence has been enacted. The lab sequence was fairly short, so I’m absolutely positive that we’re not done with Rata Primus. I’m also hoping that we meet with Joko face to face again by the end, but that’s probably being a little optimistic. I’ll do my best to check in in the comments section as I play through and discover more, and I hope you’ll do the same!