A festival dedicated to getting sloshed? No, this isn’t college life — it’s EverQuest II’s Brewday! Every year near St. Patrick’s Day, a celebration dedicated to libations runs throughout Norrath. There are drunken quests to do, pink elephants and talking cabbages to collect, tons of themed crafts to make, and plenty of drinks to partake of. This year’s festival runs from March 6th at 3:00 a.m. EST to March 20th at 2:59 a.m. EDT.

While it is disappointing that Daybreak has not added any new content to the festival for 2018, that doesn’t mean that there’s nothing to do. And there are a couple new items to acquire — namely a spiffy griffon mount and the next crafting recipe book. Here’s a guide to get you through the weeks of revelry. You can also get a visual walkthrough of some tasks by watching The Stream Team festival escapades from 2015, 2016, and 2018.

The hub of Brewday is, what else, a bar! Shaped like an upright keg (complete with spigot) and surrounded by drinking Dwarves, it’s hard to miss. You’ll find this seasonal tavern at the entrance of most of the major cities: outside the North Qeynos in Antonica, outside the West Freeport gate in Commonlands, on the dock of Timorous Deep, near the stable in Greater Faydark, and in the center of New Halas. Those who are locked out of faction cities can also find one in Haven. Once inside the bar, you can actually chose which of your faction aligned cities you arrive in upon leaving. For easy travel, the bar in Timorous Deep is close to the world travel bell.

Bar of Brell is where pretty much everything is happening. You have most of the quest givers, the ever-entertaining band The Burglars, and the festival merchant — Balin Copperfoot — tucked in the back. Like other festival merchants, Copperfoot offers some items for coin and some for special event currency. Unlike other festivals, however, these beer tokens are not heirloom. You can trade or even sell this event currency on the broker. That also means if you don’t earn enough for that new mount, you can buy more off the broker!

As the festival might imply, the quests pretty much all revolved around imbibing spirits. In fact, many require you to do just that. (In game, in game! Though if you also do it out of game, we can’t help you turn off that blurred vision.) Most of the quests can be done solo and at any level thanks to level-scaling. However, the lowest levels (10 and below) may need a friend or two for at least Beers for Brell! 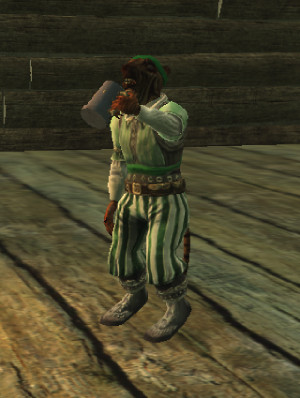 Craft brews, or crafts and brews

Besides straight up buying holiday-themed items, Brewday offers the opportunity to buy crafting scrolls that teach you how to make items such as wine jugs, feast kegs, Kaladim-themed housing items, bottles of ale, curtains, and so much more. There are so many items you can place in your home, as well as a few pieces of clothing. In total, there are now nine numbered crafting recipe scrolls (Brewday Accoutrements to Craft IX was just added this year) as well as one separate scroll called Brewday High-tech Distilleries. If you ever wanted to decorate a tavern, this is the festival you need items and recipes from!

All the necessary crafting ingredients come from the bountiful Brewday garden, so you only need to harvest a bush. You can get Brell barley, golden grapes, noble hops, wild yeast, and emerald clovers. (The clovers are a rare item.) These bushes are not everywhere, either. You can only find them near the various Bars of Brell, with the exception that none are near Halas and you can find some in Darklight Wood. It is important to note that unlike other festivals, the special ingredients needed to craft these recipes are not visible to the naked eye! You must be wearing a pair of ale goggles, acquired from the quest of the same name, in order to see them. Luckily, like all other crafting mats they are also tradeable so you can sell or purchase extra items on the broker. Also, if you have completed the appropriate quest ( A Gathering Obsession Beyond The Grave), you can send your pack pony out to gather for you. As a bonus, the pony will be better at finding clovers that you!

There are five separate achievements available through Brewday. They range from finishing quests to crafting to — you guessed it — drinking.

There are also two titles to earn from the festival. The Bouncer is a prefix you get once you’ve completed the Butcherblock Mountains race five times, and the Lush is a suffix you get after you’ve earned the achievement The Great Brewday Pub Crawl.

No holiday is complete with out a collection or two to collect! Brewday offers two collections of special purple shinies (which are found strewn about various drinking establishments across Norrath). The first collection, called Brews Across Norrath, is comprised of nine different drinks, ranging from ale to milk. Once you complete this one, you will be able to start the next collection, More Brews Across Norrath. The eight second collection shinies are found a bit farther out than the first ones; you’ll have to venture out beyond player housing cities to find them.

The EverQuest franchise is a vast realm, and sometimes MJ Guthrie gets lost in it all! Join her as she explores all the nooks and crannies from Antonica to Zek. Running biweekly on Thursdays, EverQuesting is your resource for all things EverQuest, EverQuest II, and Daybreak. And keep an eye out for MJ’s OPTV adventures!
newest oldest most liked

It is not. And I will keep writing about it as long as it is a live game — and probably even after.

I have managed to let go of SWG and I am sure that you will recover from EQ2 closure eventually.

Except you kind of forget the game hasn’t closed LOL

Just because you have a problem, don’t assume others have.

Please, do. I still want to play my Shadowknight one day.

Nope … a dead MMO is a one you can’t access because the publisher took it offline.

Why are you trying to challenge the concept of death?

It certainly should be. The only new things they add that seem to work is P2W nonsense. From what I hear to be of any decent use on raids you need to buy the ‘collectors edition’ of the game for some specific in game items.