END_OF_DOCUMENT_TOKEN_TO_BE_REPLACED
If I were to tell you that ArcheAge’s next big update is launching next month, you’d tell me that it’s too soon. And we’d both be right! Although 4.0 was just released last December, and North America has been on a six-month cadence for getting the content after it launches in Korean, 4.5 will hit servers on April 5th. Yes, that’s 4.5 on 4/5 — easy to remember, no? Executive Producer Merv Lee Kwai explained that as XL Games is putting a renewed emphasis on the Western market, North American and the European regions get to launch an update first after Korea for the first time, instead of waiting until after Russia and China.

So what goodies do we have to look forward to before the other regions? Dubbed Legends Return, this update introduces dragon mounts, two new world bosses, a crafting commission system, and Battle Balance (a change to skillsets). There are also changes to regrading equipment and the bruisers badges. And last but not least, new fresh start servers are opening up, this time with a time-locked twist. To get a feel for all these changes, I sat down and previewed the new content with Kwai, Associate Producer Seraphina “Celestrata” Brennan, and Community Manager Joe “Muzzy” Brogno .

How to tame your dragon

Brennan led off the tour by showing off the new pets that players can acquire: dragons! We’re not talking some teeny tiny little critter that just follows you around, either; a whole new category of giant pets had to be created for these mega mounts that join you in battle. While sovereigns can take on a huge and involved nation quest to end up with a wyvern, this new race of dragons are more readily available to players. By no means, however, does this mean getting your own dragon battle mount will be easy; players will have to grab themselves a Heart of Frozen Flame, which can be taken only from the lord of dragons himself, the red dragon. So yes, that’s big-time raid content. For those who don’t raid, however, there is still hope: Players can buy the necessary ingredients from others. Just expect them to be expensive!

These dragons come in three styles, each with its own look, story, color, and breath weapon. You can go for black and its death breath, red with its fire, or green and its acid. As mounts, dragons can carry two passengers. Additionally, instead of just gliding, they actually fly. The can fight in the air or on the ground; they are actually built very well for sieges. Sounds pretty powerful, doesn’t it? They are, but Brennan pointed out that there are some restrictions with these giant pets. Besides the work in trying to obtain them in the first place, dragons have to be renewed every 30 days by acquiring more materials as when players first forged it. They also cannot be dismissed during battle and can die just like players. Brennan explained that this is part of keeping these behemoths balanced against the rest of the game.

To start the quest to raise up a personal battle dragon, players will visit a new type of Daru that have popped up in all the nations (yes, even pirates!). These purple priests will explain how dragons left the world and can be brought back, starting players on the path to getting the heart and forging it into the soul of a dragon. I appreciate that there is a chunk of lore and story behind the reemergence of these dragons in the world. The lord of dragons also gets more backstory with this system.

As amazing as dragons are, there is more to the update than that. There are new world bosses for groups of 10 players with 6K GS or higher to conquer. After killing Hanure, new tough enemies will spawn in. Defeating these Shadow Invasions will offer new achievements via a quest as well as rare material drops from the boss that can be made into lucrative trade packs. Don’t stress about the special crate containers that the rare lunarite reward comes in — the keys are crafted in-game with in-game items!

Crafting gets some special safeguards this update. A new system allows players to commission work using the new workbench and crafting taskboard. Found at any community center in the game, the taskboards allow players to input the materials and coin they are willing to pay for an item to be crafted. Crafters can then choose a job, craft the goods, and get the payment for it completely securely. This works for big ticket items like weapons as well as just processing materials. Besides removing the chance of weapon theft and such, this system also allows for more accessibility to crafters since you don’t have to catch the appropriate crafter online in order to have your order made.

Another change coming is the removal of destruction in the regrading process of crafted items. If a player fails a regrade, the equipment will no longer be broken and lost. Instead, it becomes locked at its current level, making any future regrade impossible but allowing it to still be used at its current level. Brennan pointed out that this has the added benefit of giving players items to sacrifice for regrading Erenor pieces. On top of that, regrade rates are being increased — in some cases up to double.

Skills get a shake up as well with the Battle Balance update. As Brennan told me, “It is going to basically set things in motion where players will be able to use a main triad of core skill trees in addition to supporting sets of skill trees.” The main triad is made up of battlerage, sorcery, and archer. These three will be set up in what Brennan described as a rock, paper, scissors format, where one will be better against another and weaker against the remaining. The support trees of songcraft, defense, occultism, shadowplay, auramancy, vitalism, and witchcraft play off of each other in their own circle. “The goal here is: shake up the skills,” Brennan explained. “Put a bit more parity between all of the trees themselves without completely ruining what a player has already build.” XL Games was taking care to not wreck item choice by switching up stats.

And finally, PvP players will be happy to learn that the way bruisers badges work is being changed. With the update, players will get a certain number each day, meaning they can participate in the arenas as many times as the want and just choose when to spend their badges to get rewards from the arenas. 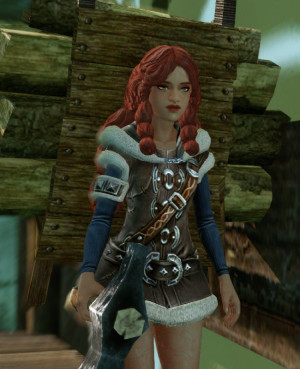 Kwai discussed the new fresh start servers that are opening up with Legends Return. This third set of fresh starts will have a few big differences, however. One of the biggest changes is that content will be time locked. Additionally, players will only be able to make a single character on the server in the beginning — but no Dwarves or Warborn. Why are those races excluded? Kwai explained that they gain XP too fast, so coupled with the transformations, they unbalance the experience.

What does time-locked content mean? Content will be gated and slowly unlocked to the current state over a seven to eight month period. It is a hard gate to limit amount of progression to allow entire playerbase to progress at similar pace. Time-locking means that the level cap at start will be 50, magnificent gear will be the highest possible, and greater dungeons will be available and their gear will be relevant again. Open world objectives (red dragon, kraken, etc.) will be present, but certain areas will be walled off and inaccessible, like the new races zones. Player claimable areas on Auroria will be deactivated (you can’t claim castles, though they will be accessible. Diamond Shores and Mistmerrow will be complete. As months go by, more content will unlock: Months two and three will move the level cap to 55, add epherium and obsidian gear, and unlock the ability to claim Auroria’s castles. The full roll-out of which systems unlock when will be coming in infographic form soon.

Why would players go to these servers with so many restrictions to start over? Kwai explained that players have said the best experience is the first three months, that ArcheAge is the most fun in the beginning. Here is when the landscape is up in the air: Guilds are forming, land is being claimed, illegal tree farms are a thing, and conflict is happening with folks on a more even footing. The key is that equal footing in the beginning, when everyone has a chance and the world is up for grabs. Kwai also noted that the Marketplace will be very restricted on the fresh start servers to keep with the idea of equal footing. Land items will be available first, but not items like lunar and solar farms. The market place will expand a bit as the months progress and new systems unlock, such as costumes and the underwear system.

Access to the fresh start servers will be free (they must still be on a brand-new account), but players can get extra goodies by buying a preorder pack. These packs, available today, allow players to create their characters and reserve their names. The silver pack is basic for $9.99, whereas the platinum pack adds a number of cosmetics to the deal for $99.