There are MMOs that have been around a while, and then there is EverQuest. It’s so old school it is old enough to be out of school! Yup, EQ turned 19 years old yesterday. That’s 19 years of the iconic music, 19 years of Qeynos, and 19 years of Fippy trying to storm that gate! So much has happened in Norrath between March 16th, 1999, and March 16th, 2018 – more than one single restrospective could cover. So we’ll just look at a single year!

As is tradition, I’ve sat back and looked over the previous year, remembering the highlights and goings on of the game. How did the 19th year play out for one of the oldest MMOs? Sadly, this year was of the leaner variety; not much happened across Norrath. You wouldn’t know that by all the anniversary offerings, though! Take a stroll down the cobbled lane of memories, but don’t get lost in the nostalgia; there are oodles of anniversary quests to fill your schedule with during the celebration, going on now through Thursday, May 10th, 2018.

Before getting into the details of content and such, it is worthwhile to point out that the EverQuest community is still strong. Not only have folks been playing the full 19 years (and some meeting, marrying, and now raising their kids to play!), but the community rallies to support its members. One example of that was demonstrated in October when former SOE CEO John Smedley put a call out for help for a former associate producer of the game and fans stepped right in.

Progression in the hunger years

Over 19 years, there is bound to be an ebb and flow in amount of content. This one happened to be one of the leaner ones. That’s not to say the year has been devoid of content; there have been weekend events and holiday festivals, on top of what EQ’s 19th year has primarily been about: progression servers and the 25th expansion.

Progression servers do account for the largest bulk of news. April saw the unlock of Lost Dungeons of Norrath on the Phinigel progression server. Expansions then continued to unlock throughout the year, reaching Depths of Darkhollow in January. In May, the POP locked/truebox progression server of Angarr opened up (POP locked meaning expansion content stops unlocking after “Planes of Power” era content, and true box meaning each computer could only run one single EverQuest account). Unfortunately, it had quite the rocky launch with many issues, including lockouts and duping. This server worked through its expansion unlocks up to Shadows of Luclin in January 2018. Lockjaw and Ragefire, the two older progression servers that worked via player voting for unlocks, opened up through Gates of Discord, which unlocked in January 2018. The newest true box progression server, Coirnav, was announced in February and opened on the game’s 19th anniversary in march.

Sadly, progression of a different kind happened on October 18th when the Valak’Aerr server was merged into the Fippy Darkpaw server. It’s never easy to see your version of the world end. 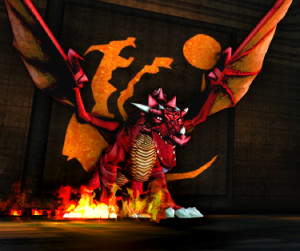 In the last 19 years, EverQuest has produced 25 expansions. That’s a feat to be very proud of! The latest expansion, Ring of Scale, was announced in September and launched in December of 2017. Players would preorder starting in October, and the expansion followed with the now standard offerings of three editions with the prices of $34.99, $89.99, and $139.99, each providing more in-game goodies. Anyone who is missing a few expansions will be happy to hear that the purchase of Ring of Scale also included all previous expansions.

Ring of Scale built upon the Combine content, returning players to Kunark to aid the Combine as it faced off against the Sarnak Empire and the Ring of Scale. The adventure includes breaching the heart of Veeshan’s Peak. The expansion includes a new level cap op 110, six new zones, and all new collections, spells, abilities, quests, and raids.

What’s Norrath without its festivals? Players got to enjoy the old favorites of Nights of the Dead in October, Frostfell in December, and Erollisi Day in February. There were also special weekend events sprinkled about here and there, such as the special bonus XP and rare spawns event weekend In May, the Hardcore Heritage Old Sebilis in June (where the classic zone became more challenging and the mobs dropped gear that had been updated for higher level characters), and a fall fun bonus XP weekends and reduced lockout timers in November.

While it wasn’t necessarily an event, EQ offered a special Sarnak skeleton illusion to every All-access paid member who logged in between September 20th and October 15th 2017. Yeah, I am kicking myself for forgetting to do that!

On top of the events, there were a number of sales and special items offered through the Marketplace throughout the year that players could purchase, from bags to pets to lockboxes. One recent addition was the lizard lockbox, otherwise known as the Iksar Heritage Crate, which became available in January.

Now that we’ve looked back, let’s look ahead — to the party! You don’t think Norrath would ever skip a birthday bash, do you? Players can celebrate all things EverQuest during the 19th anniversary celebration that will run all the way through May 10th. What does the celebration involve? Actually, quite a bit.

I was pleasantly surprise to see that this anniversary celebration includes four brand-new missions. I was unhappy, however, to learn that these missions are tied to the new expansion and therefore unobtainable by anyone who hasn’t purchased it. These missions are A Formal Dinner Party from a Dreadspire servant, Fish Eyes in the Dark from Cedfer the Fishmonger, Pieces is Pieces from Fabikren , and Lost but Not Forgotten from Dismas Kaneriti. All the NPC are in the Plane of Knowledge. I can’t really tell you much about the quests themselves since I couldn’t run them during our anniversary stream on OPTV, but the guides linked from ZAM are pretty in-depth. Note: Tthere is a hidden bonus reward for each of these new quests if you do something special for each one (if you want a hint, you can check your achievement pane under events -> anniversary!). 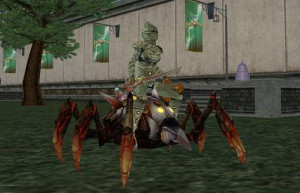 As with past years, players also have access to previous anniversary quests. All content from the 14th through the 18th anniversaries are live now, and the 5th through the 13th anniversary content will become available on Thursday, April 12th. A number of these, like the pub crawl in year 16, also have level requirements, so new players may have trouble doing many of the anniversary missions. But anyone can dive in and try drunken Gnome racing! Besides ZAM, another good resource to look back through these many offerings and make sure you don’t miss anything is Fanra’s wiki.

If you are on a progression server, don’t think you are forced to miss out: All content that was available to the specific expansion era your server was in will be available to play.

During the celebration players can also buy a new mount from the jubilant merchant. This Lava Sessiloid could be the burning hot spider mount you’ve always wanted! Some limited-time armor sets are also available on the Marketplace; you can grab the Golden Hero and Clockwork Hero’s Forge sets before they disappear again on March 31st. On top of all this, a 50% XP bonus for all servers is also turned on through the end of March.

Hearthstone’s Mercenaries mode will get one last major patch that adds...