I think that we can all agree that Hirku seems like he’d be a pretty fun-loving dude to hang out with in World of Warcraft. We would all get cooler just by association, and he would take us on these crazy adventures where we’d log in the next day, find ourselves naked in some unfinished expansion, and have no recollection of what happened the night before.

I mean, look at this picture! “Ordinary” does not suit this party pirate’s life at all.

As a side note, I am completely jealous of players who have the ability to take great screenshots using fun emotes. Trying that usually results in me taking a picture of my character’s left ear from an extreme close-up view. 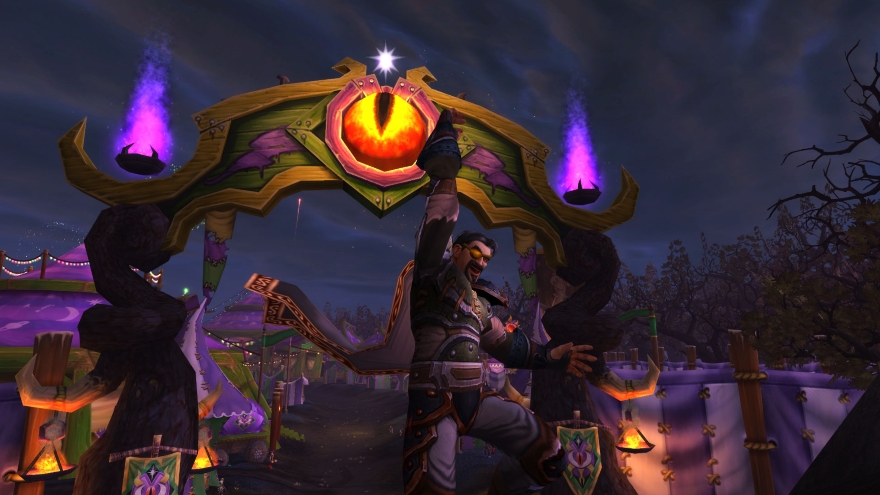 Another spiffy World of Warcraft shot, this one from Ivan who sent us in an image of a heavenly body. DO NOT READ ANY DOUBLE ENTENDRE IN THE PREVIOUS SENTENCE. IT WAS UNINTENTIONAL. I SWEAR. MOM, YOU SHOULDN’T BE READING THIS SITE ANYWAY. 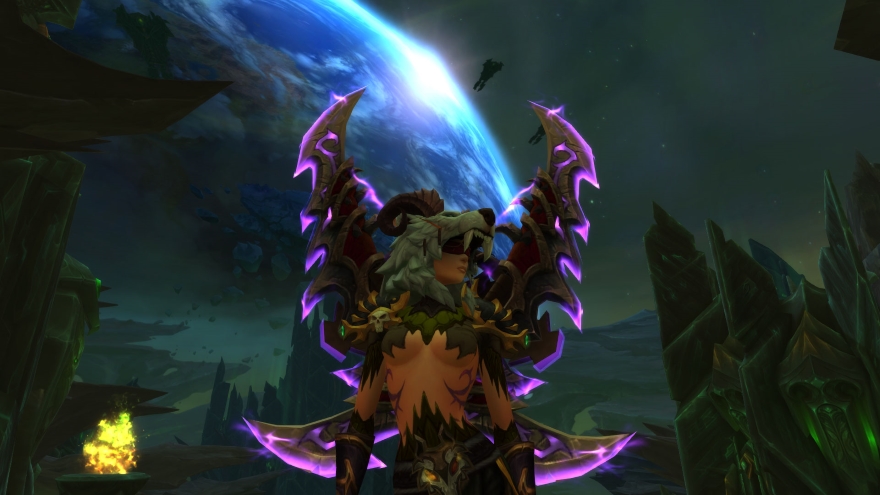 “In Lord of the Rings Online, I’m finally singing and dancing my way through a concert tour of Moria,” posted Phubarrh. “Considering how much grousing I’ve heard about the expansion over the years, I’m surprised to discover that I’m really loving it… so much to explore and accomplish! Not that I’ll be sad once I’m out in the sunlight again, but it does feel like a complete experience.”

I think I speak for all of us LOTRO Moria vets when I say, give it time, Phubarrh. Give it time. 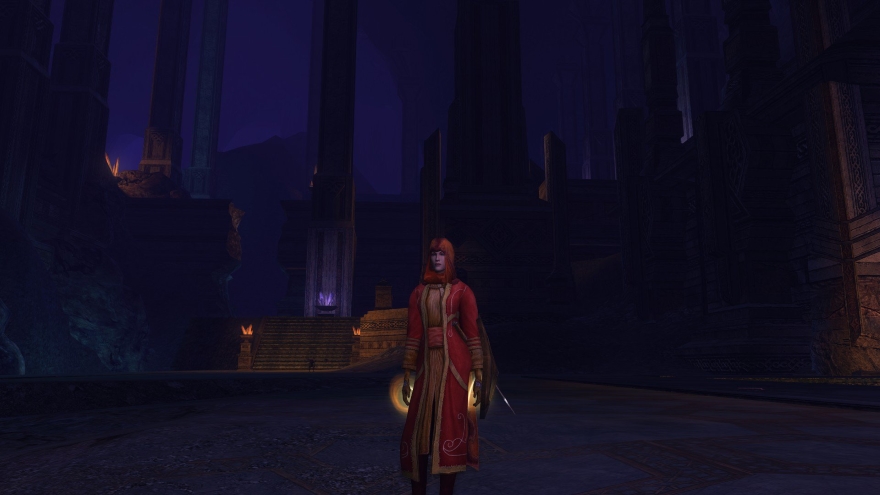 Mysecretid has gone to the dark side: “My Sith Jedi Guardian in Star Wars: The Old Republic. Her father is one of my Empire Sith characters, whom I play as a noble, tragic figure (he’s almost Shakespearean). He wished to turn to the Light Side, but felt himself too steeped in blood to be redeemed. His daughter found the path on her own — even her belt-buckle proclaims for the Republic!” 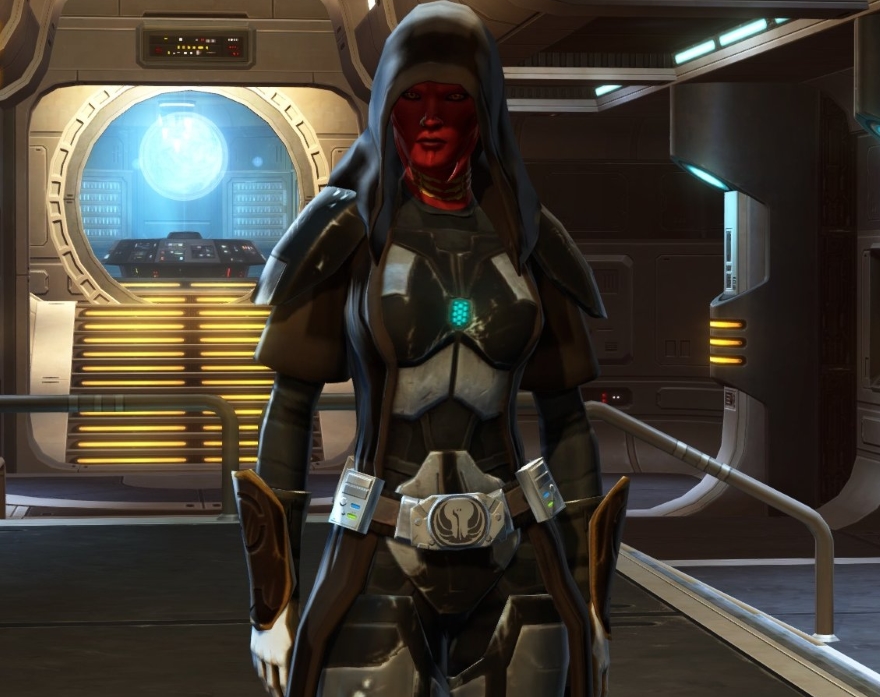 “Playing some Warframe as always,” said CapnLan. “I infiltrated a Grineer facility to take out one of their commanders. He’d been causing some problems for our agents in the region so he had to go. I make it about halfway to the target’s location when I round a corner and find him right in my face. We both froze. I wasn’t supposed to be there. He wasn’t supposed to be there. Whoever made the first move now would live…and the loser would die. But I’m a Tenno. An assassin. I did what had to be done. He had no chance. Unfortunately for him, he saw it coming all too well.” 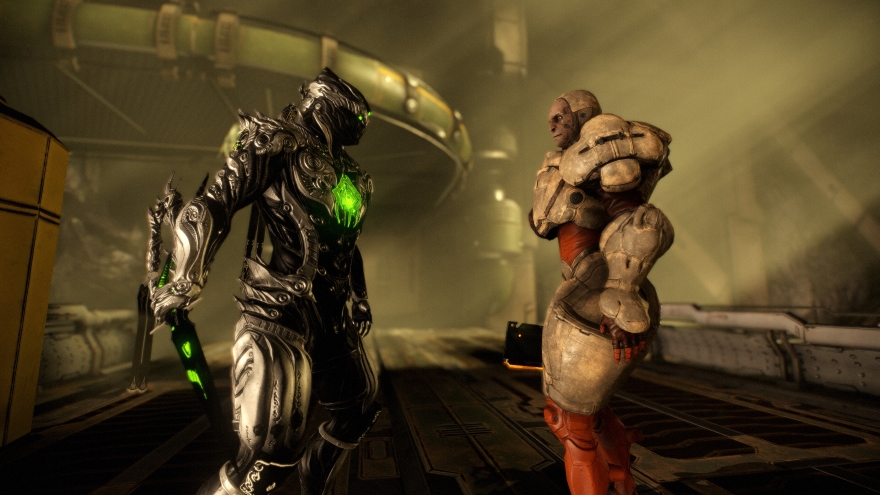 In previous weekly screenshot challenges, I’ve asked for your “firsts” — your first game, your first pictures in any particular MMO, etc. Today, it’s about your “lasts.” Do you have any final pictures that you took of a game before it either shut down or you left it? Share that and let us know where your headspace was at during that moment!

Ok, so I’m not actually leaving FFXIV…just taking a break. The Eureka grind just about did me in, I need some time off LOL. Here is my level 20 (elemental) Summoner, exhausted from the FATE trains–ready for a nap.

@Mysecretid What is this set? Looks great.

It’s actually not a set from the store, Rolan! :-) It’s put together from various ordinary dropped and crafted parts, because I wanted something which looked impressive, but still Jedi, rather than Sith.

They’re all dropped loot pieces, or things I found on the Exchange, rather than store bought.

I have no problem sharing the names of the pieces with you, but dammit, as you may know, SWTOR has a nasty habit of changing the names and looks of loot gear without warning. Some pieces, they just pull from the game entirely.

Case in point, the Republic belt buckle — that was a fairly easy-to-get ordinary loot drop in the earlier days of SWTOR.

I found mine fighting Imperial mobs in the arms factory on Balmorra. The piece is (was) called Prototype Bovin Braceman’s Belt, and it’s a blue-quality level 38 piece of heavy armor. (I’m using the game’s appearance tab on my higher-level character here, of course).

Problem is, at some point, the Republic belt buckle just seemed to disappear from the game entirely.

At first, in a fit of cynicism (?) I thought “Oh, they took it out of the general loot to sell the design in the store” — but it has never showed up there either, that I’ve seen. It’s just … gone.

I found one on the Exchange one time, but the default look of the named belt had been changed — no Republic emblem.

I took a few minutes before I wrote this to see if i could find any of the other pieces on the game’s Exchange on your behalf, but I had very little luck. :-)

There’s a piece called a Hollinium Chestguard in the heavy-armor section which is essentially what my character is wearing here, recolored. Maybe you can dye it back to a better color scheme?

But it looks like the SWTOR devs have been messing with the non-store gear again, because some of this “lowbie drop” gear is nowhere to be found now, under any name I could see. :-(

Your best bet for this outfit is probably to do what I did (if you care, and have the patience for it) — just keep checking the Heavy Armor listings on the Exchange semi-regularly — and using the Ctrl-click preview function — to see if pieces that still look like these still exist in the game now, under whatever name the devs are using for them.

Again, the Hollinium heavy armor (craftable, as I recall) may be a place to start looking.

Apologies for the long answer, Rolan. I hope it was of some help!

First, thank you – for your time and elaborate answer. Second – you gave me enough to go on, I’ll take it from here. :) I wondered not so much about buckle (yes, it does look good), but about chestpiece. And so happens my Republic main has Synthweving as her crew skill, so I might be able to figure something out. Chestpiece looks amazing.

Hmm. Two obstacles for me with regard to this weeks challenge. One, due to an old HD failure, (you kiddies might not now but HDs used to have platters that occasional crash literally) I lost a lot old pics of my last days in SWG, and other games.

But, generally, I’m not around for sunsets. Because if a game is shutting down, I make my move to another game and I don’t like to be there when a game I enjoyed breathes its last gasp. It’s too emotional, seriously.

So instead I’m posting a pic of my Gunner in her new “I kicked ass in a raid and all I got was this stupid outfit” outfit. Lol.

Well, actually I like the outfit and I was carried through part of the raid. But never let the facts get in the way of a good screen cap.

She is colorful. Lol

Sorry Uta, no pink option. Should a put in a ticket with tech support? ;)

…but I've been eyeing that dress for my eventual Gunslinger. Where does it drop again? o.O

Black Tower, a raid. Get a little geared up and you can join the fun. :) You remember Lusong, the one time HM student? Well, this is a raid that concludes his story.

Loot is great, but it is mechanics heavy. Nothing you haven’t seem elsewhere though.

It will be awhile before my Gunner will get there…they haven’t even released the patch so that I can roll her yet. :(

as for “lasts” … these are all the “last” screen shots I have from various games I have played:

Atlantica Online (was over lvl 100 in that game, so no idea why my last screen shot is 73)

Black Desert Online: last screen shot I have of being Guild Leader of Derelict in BDO (the guild I started on release day & led up until connection issues and burn out on the game made me quit … now I am just an officer in a diffrent guild I helped start after I came back to find that Derelict only has 2 members, and they are both inactive [so I can’t get an invite back into it])

Here’s my final screenshot of my favorite MMO:

My last Day on Peregrine Island

I may have gone a bit too hard with the Dye system, but if you got unlimited access to it as part of the subscription pack … *shrug*

I play almost all games zoomed all the way out, especially ARPGs. Let’s face it, most of them are not in the upper echelon of graphics since they are made with the intent of having a ton of mobs on screen and associated particle effects going off at the same time.

That said, here is a zoomed in shot that shows how good Path of Exile looks. I am always impressed with this game when I make a visit back to it.

Challenge – last pics in a game. Of course mine are going to be from the last day of Asheron’s Call.

1) Everyone gathering in the Marketplace where we reminisced while waiting for the lights to go out.

2) A group got together for a shot on a well known bridge. They look like specks from this distance.

I took a ton of pics that day mostly of things/places that only meant something to me and would make no sense without context.

Stoopid humie likes feature, but who cares what stoopid humie thinks? Me kool too! Me got moves!

Perfect. Lol!! Nice touch with the guys up at the top of the ridge!

Haha, love it! Good to see you posting again.