END_OF_DOCUMENT_TOKEN_TO_BE_REPLACED
The things I do for you! You know that story is everything to me, and in order to bring you more information, I allowed myself to be partially spoiled on Secret World Legends’ start of the long-awaited Season 2. If you know nothing of what’s ahead and are trying to stay totally pure of any information other than it launches on April 4th, then go ahead and leave now. Right now. That was your warning. Because I was just on a pretty detailed (but not completely spoilerific) tour of the upcoming content release with Game Director Romain Amiel and Community Manager Andy Benditt. And I am going to share some of it with you. Don’t worry, though – I’ve got your back. I’ve made it so incredibly obvious the different levels of spoilers — from nothing to lots — so if you get spoiled, you will have only yourself to blame.

If you already know where we are heading and want to learn details about non-story stuff that is pertinent to the expansion, I’ve got a whole section ahead for you. You can stop before any of the story spoilers happen. For those who want to go ahead and get even more of the juicy tidbits of the story, I’ve got a whole big bite of it for you, including screenshots. But even you don’t get to know everything! 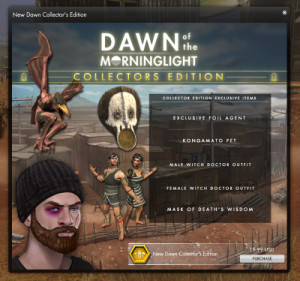 Here is the safe zone as far as spoilers go. If you are here, you already know we are heading to South Africa. You likely have already followed the news about having to infiltrate the Morninglight organization. Well, that’s all we will say about that now. Here, we will talk about timing, additional content, the collector’s edition, and caches.

When the season starts on April 4th, players will have access to the full zone that the story takes place in. It has the entirety of the story mission as well as a collection of side missions. What is there now, however, is not all that will be there; Amiel said that there are other main missions that will be added in and given to the NPCs (including one planned investigation mission). He didn’t give a time frame, but he stated that all of the fully voiced cutscenes are already completed — it’s the gameplay aspects that are lagging a bit behind. Those added missions may not even be the first additional content that is released after the start of Season 2; Amiel said other content (like new systems) are also in the works. But he hopes the new content will be quite soon, and he assured me that lots more is planned for after this release.

We know that the story in SWL will always be free. All players will have access to the new area and all the missions when they reach that part of the story. Those who want something a little extra with the zone’s theme, however, can purchase the collectors edition. For $19.99 cash (there are no plans for CE’s to be available for aurum), players will get a pet, an outfit, a mask, and a special agent. Yes, of all the agents in-game, you can actually purchase one agent now. You don’t have to buy a CE to get access to even more agents, though: Ten completely new agents are being added into the system and can be obtained through regular in-game means.

When Season 2 opens up, there will also be a new cache to collect. The tribal cache has a number of items available, including a zebra mount, a hyena pet, and the Neotribal outfit. If you are as unlucky with caches as I am, then you will be happy to know that once you complete the story, there will be a merchant in the area that will sell outfits, a pet, and masks using the favor you earn by doing the Morninglight missions.

I am pretty excited about delving deeper into the stories and lore, both in this release and those to come. Part of that is I have a family connection to South Africa; a family member lived there for two years, and I have heard much about the country. I even have a trip planned there later this year! Without spoilers, I will tell you that I enjoyed what twists and turns I saw of the story. Some of those twists were sharp! 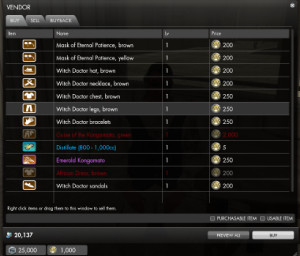 The atmosphere is well done and follows pretty authentically from what I know of parts of South Africa. I love how much more active and alive the compound feels with people actually moving around and having conversations. I can’t wait to run all around and listen to them all! There are new creatures based on South African lore, and this lore is woven into the story. (Amiel said he hopes it encourages folks to look up even more of the history of the region.) There are bosses with some challenge to them, so those who’ve been spending time upgrading their gear after Tokyo may be grateful for having done so. We also see a return of a fun feature that I know I have totally missed since a certain previous mission. And I am not spoiling anything else in that matter!

Now let’s be honest, if you ask me if it is enough content, I am going to answer, “There is no such thing as enough story content in SWL!” You know this to be true. But it is a meaty chunk, and it is just the beginning of Season 2. I understand that after waiting so long for it, some might still feel it is too short. To that, I am going to say that this release is meant to set the stage for what is still coming. And as long as what is still coming isn’t as long a wait (as Amiel said he hoped it wouldn’t be), I will be tided over. For a spell. Now that the ball is rolling, Funcom, let’s keep it rolling! Until then, I am going to just immerse myself in this new area.

Speaking of the new area…

OK, now going on from here will have more details about the story, but not all. One, I don’t even know it all; the devs were kind enough to skip some so that I still had a few surprises to experience myself. Two, because the story is paramount, even though I want you to be excited for playing, I do not want to ruin your experience. So right now is your chance to turn back. To experience it all fresh, you need to stop reading now.

Are you absolutely sure you want to go on?

This is your very last chance!

OK then, you can’t say you haven’t been warned.

The Spoiler Zone: You have been warned!

OK, so you do want to know a bit more about what you are heading into. Here you go. This is a bit about the story. Funcom was not kidding when it said familiar faces would be involved. The whole start of this story is being approached by a familiar face to fly you off on this adventure, and near the ending you get surprised by at least one more. Tsk, tsk, I am not telling you who. (In fact, I am really sad I didn’t look away at the end because I wish I hadn’t seen that one!) 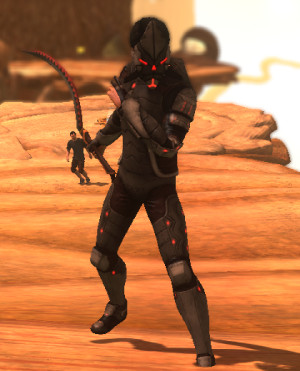 So you hop a plane and head to South Africa. I admit, I was disappointed that there wasn’t a stopover in Tampa. I was hoping for a little Council of Venice styled adventure to continue. But alas. The good news is you do make it to South Africa, and you do indeed join the Morninglight. You get to live and work in this giant compound that is separated into three levels of the Morninglight faithful: the foundlings (recruits), the anointed (the brainwashed), and the favored. Each level has better accommodations and more trust. Your job as a new recruit is to do certain tasks for the compound. Each task grants you points that you are earning toward becoming an anointed. Planting crops, making deliveries, even praying at a fresco are some of the tasks you will have. You even have a gym where you can get your evening workouts in. There are changing daily tasks that you can do to build up those points, but let me tell you, you need a lot of points. A lot of points. At least there are achievements involved.

Life as a foundlings isn’t ideal. It sucks: chores, curfews, and that sort of nonsense. But the point is to infiltrate and learn more. As such, you might not exactly follow all the rules. I mean, who doesn’t immediately want to go outside at night the minute she’s warned to not go outside at night? There are nooks and crannies for delving deeper into the lore of South Africa, including NPC conversations (both the ones you click on and all the ones you overhear while walking around the camp!) as well as actual lore. You slowly uncover what is going down as you investigate. You advance through the ranks, always with the goal of getting into the mansion. You become anointed (will you avoid the brainwashing?), which is the rank of those folks you’ve been running into around the world (including the one who brought you here).

There is so much more I can tell you — about features, about friends, and about foes. But I really don’t want to spoil too much! I saw more than I wished I could have, but it makes me want to get in and do it all for myself (and share with you via streams) even more. I will tell you this: For those who want to know, Amiel said the six-mission complete story arc is approximately three hours of gameplay. The side missions, investigating, and lore finding add even more time atop that. Players have a reason to return to the area if they want to earn those items on the special vendor there. But this time, however, once you complete the six story missions in this arc, you are shown exactly where the story will continue next time. Yes, you get to know the next zone! No, I don’t know what it is; I haven’t finished the story.