If you’re a City of Heroes fan – or any kind of superhero fan – then you’re gonna want to check out the brand-new and never-before-revealed early-game Ship of Heroes map that Heroic Games just sent over. Remember, SoH is literally set on a starship, but it’s so massive that it fits all kinds of real-world zones inside.

“Every new MMORPG gets to the point where they can begin sharing the current version of the persistent level with their community,” Heroic Games writes. “Ship of Heroes is at that point right now. The map below is our first viewable version of the map of Apotheosis City. While every part of the city has not be allocated to a zone yet, it is clear that there will be about a dozen zones in the first playable level.” 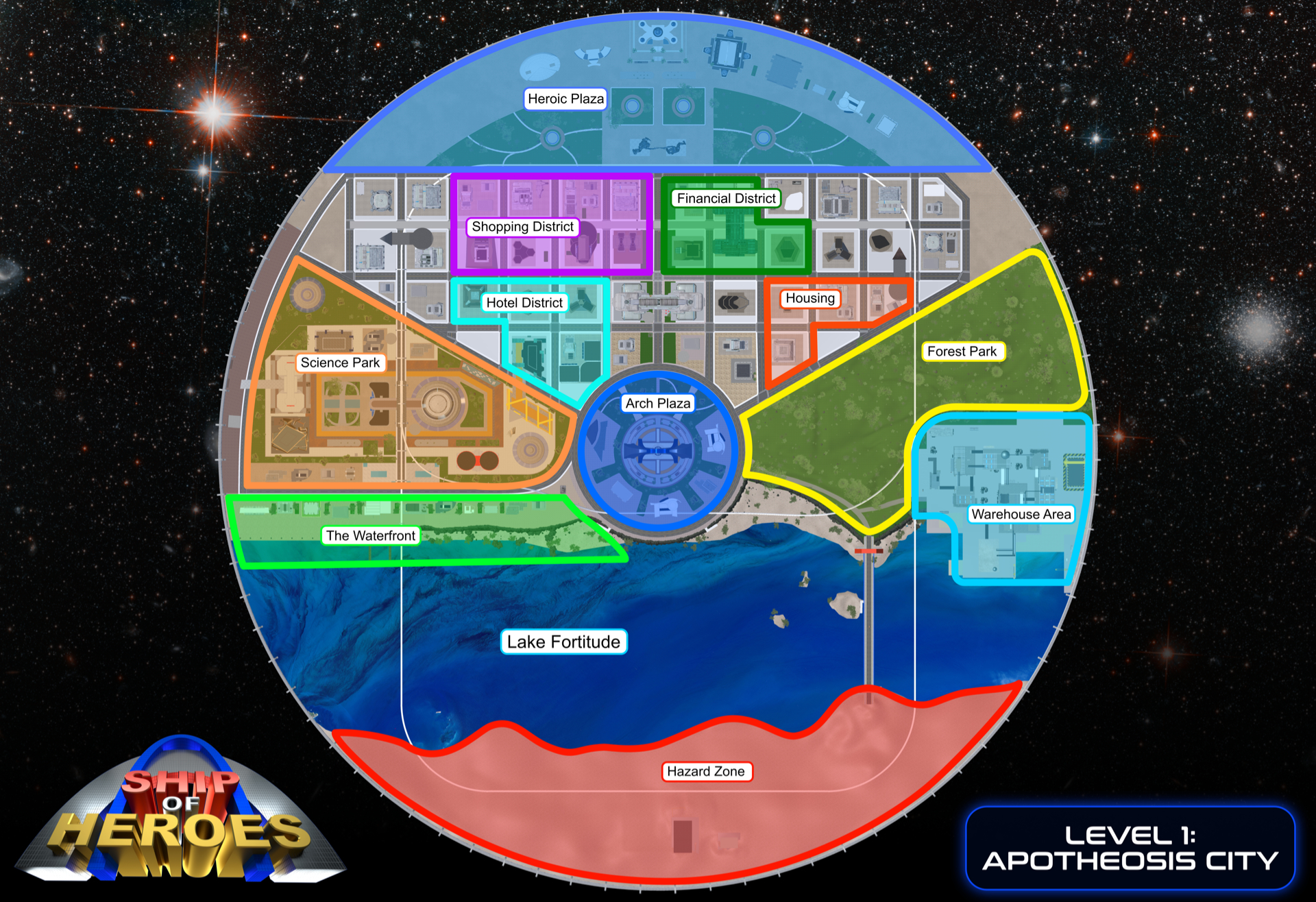 Click the map above to really zoom on in. A few notes from the devs:

Apotheosis City is one of the most important cities on the FHS Justice and benefits from its proximity to the engineering level. It was one of the first 8 levels built of the Justice, while still in Earth’s orbit and is the one of the most Earth-like environments, including a body of water, green spaces with grass, trees, and vegetation, and a holographic Earth-like sky, which will offer night and day and eventually changes in season to accommodate its human residents. Of course, many engineers live in Apotheosis City – it also has a special problem with Prometheans who inhabit unmapped access ways under and through the city and the Ship at large.

The Apotheosis City level is large – larger than the starting maps in City of Heroes and probably also SWTOR, for any of the first four game-entry worlds. It is a large open world, not unbounded but large by modern game standards. The devs have managed to avoid the dated look of endless prairie, desert, or similar-looking Soviet architecture that became common 10 years ago. Comparing to modern games, Apotheosis City is about the same size as the map of Fortnite’s Battle Royale, for example, but with much more urban space.

The FHS Justice uses a modular in construction with 20 levels (and sublevels) along with helm and engine levels, each level is .75 miles in diameter, like Apotheosis City but very different in function and appearance. The ship is 20.4 miles long. As the game grows, each level will become playable area for missions, careers, harvesting, and possible bases but there is a literal universe of potential expansion with alien and human ships and other worlds.

This map will become a tool in-game, as well as providing fans with the ability to zoom in and place some of the scenes they already become familiar with – such as the Arch, the Science Park, Heroic Plaza and the Warehouse District.

Heroic Games tells us that the map is due to get periodic updates, with the next slated for April or May. We “still have the rest of 2018 to complete the planned portion of the map before Beta begins,” they write. Expect more details on the individual zones in future teases! And stay tuned for this afternoon, when we’ll have our full report from our meeting with Heroic Games from GDC!

Without the superhero element, this game could have been a very interesting science fiction MMO – with the whole premise of massive generation ships traveling through space, occasionally coming into orbit around different planets, and all that. Without the science fiction element, they would have still been able to focus on creating a great ‘superhero’ experience.

I mean, I get that they probably felt the need to separate themselves from the other ‘City of Heroes’ inspired projects, in some way, but slapping these two ideas together, like this, has always felt a little weird, to me. But, I do have to admit that I am pretty interested in seeing whether they can actually pull it off.

The name of the game could imply a small closed space. This article gives a hint of how wrong that idea is. This is just one of 20 zones on the first of their Hero Ships, and they have not even started on the planets they are going to visit. I am not sure how many players they will need to fill just one of those ships without it looking deserted, but clearly they expect the number to increase steadily over the years. Let’s hope so. I have a fondness for things with unlimited room for growth.

I’m not a superhero person myself. Never got into comics, wasn’t even that much of a fan of the various cartoons as a kid, and the recent Marvel and DC movies have all been entertaining on the first watch but no replay value.

That said, the more I read about Ship of Heroes, the more I like the sound of it. The IP still holds no real interest, but the team seems to “get” MMOs and have been making some really good design choices. I think once it gets closer to release I’ll have to take a proper look into combat and progression mechanics and if they meet my gaming needs, I’ll give it a go!

Still interested. Heroes sailing on a ship to help other planets is a odd but interesting concept.

While I have many questions, one stands out above the rest.

Why a Hotel District?

The usual, you know.

Very interested in this one. I miss me some King’s Row, Steel Canyon, and Skyway City to name a few! I missed the KS if it had one but certainly will give it a serious look.

They had one, but I believe they cancelled it when it was clear they weren’t going to meet their funding goals.

While I am still having difficulty wrapping my head around the space ship of superheroes, I am game.

You and me both, I hope it looks better than the Alpha because even Rift looks too dated for me lately.

Really? I still like Rift’s graphics personally. Cranked to eleven they look nice.

And the SOH Alpha really did give me the feelz of ‘city of heros-esque’ combat albeit at a distance.

Maybe next time they show combat from up close; enemies in my justice face, getting smacked by my justice fists!

Just imagine something the size of the Death Star…and think of how much surface area that would contain. :)

That’s the only way that I can reconcile this. That it’s some monstrous generation ship.

Yeah, I don’t understand that design direction. Why a ship, instead of just a city somewhere?

World of Warcraft: Shadowlands has an encrypted alpha build out now

EVE Online is adding a frigate bay to every battleship in...

WoW Factor: The World of Warcraft expansion tour – The Burning...

Blue Protocol is going to be free-to-play on launch