For most of us, achievement systems in MMORPGs are either ignorable annoyances, occasional goals, or amusing distractions. For World of Warcraft player Xirev, they became an obsession.

The Swedish player, who mains a Blood Elf Fire Mage, announced this past week that he was able to complete all of World of Warcraft’s 3,314 active achievements. The herculean task took him six years to do, which began as a way to earn a mount and riding skill that he could not afford. This sparked an interest in achievement hunting, which ramped up to where he was putting in 10 or more hours a day into the game during the Legion expansion cycle. He has become the first player to get all of the achievements through Legion, which has also netted him 424 mounts and 29,210 achievement points.

Xirev said that the hardest achievement for him was one called Going to Need a Bigger Bag: “It requires you to collect every single rare item from a Mists of Pandaria zone called Timeless Isle, some of the rare items are obtained from rare spawns that can have very long respawn timers. I didn’t even touch that achievement for a long time because it only gives 10 points and nothing else for the amount of effort you need to put in to get it.”

Want to see what a fully maxed-out achievement screen looks like? Check it out: 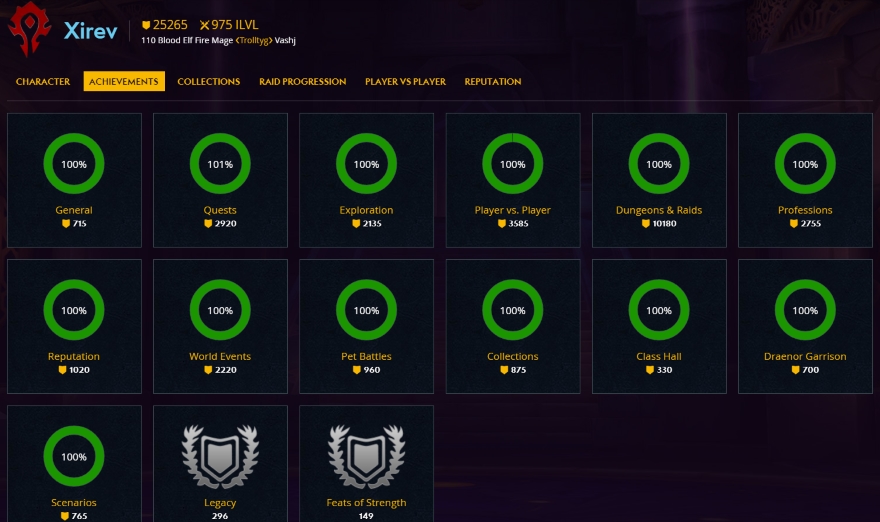 Did no one else notice that he has 101% of Quests achievements done? Going above and beyond…

Color by numbers gaming. This is what you call the MMO-Anti-RPG

…they’ve been successfully doing it for over 12 years now.

Is it a success when the majority of your playerbase prefers private unofficial servers to the real thing? Are you a success at what you do when you masquerade your product as one thing (an RPG) and issue it as another (themepark group activity)? World of Warcraft is a successful video game… It is gaming. It is not an RPG anymore than UNO or Guess Who is an RPG.

Considering how diverse the different activities in WoW are, this is very impressive. I mean, he had to play PVE and bg PVP and arena PVP on an extremely high level to achieve this. Most people only truly focus on one of those at most. And then side activities like pet battles, holiday events, …

Kudos – I love achievements, but I find so many of their achievements really really hard, especially given my time limitations. I appreciate someone’s dedication to what they like – now, I hope there are other things in WoW that he’ll find entertaining beyond that!

Can’t be anything but impressed, that is some serious dedication. I could never have done it myself so kudos to my fellow Swedish brother!

I guess we call call him an… achiever!

This is an insane accomplishment! I used to do a lot of achievements so I know how long they take. Kudos to him.

So how did this dude afford to do this 10 hours a day for 6 years?

I’m impressed at his fortitude.

I did the “What a long strange trip it’s been” (also for the mount) and what it gave me besides the mount? The sense that I HATE long term achievements and it quite possibly was the final straw that made me thing “hm…am I really having fun playing WoW anymore?”

This is one reason I quit doing achievements lol. I play sparingly now.

Achievement hunting in any game is the first step towards never wanting to play again.

i quit achievement hunting shortly after my third or so attempt to get the fucking gnome to the rocket.