END_OF_DOCUMENT_TOKEN_TO_BE_REPLACED
If you try to zoom into Guild Wars 2’s Super Adventure Box today, you’re… going to be wholly disappointed. That’s because while the patch notes and associated updates are live today, SAB itself doesn’t open up until Thursday, in spite of the fact that my kid is on spring break all week and we really need SAB right now ArenaNet!

According to the patch notes, we’re getting a new SAB-themed race, new achievements, and a whole bunch of bug fixes and quality-of-life adjustments (yay, no more giant cutscene for the first map). The devs have given all classes a hefty balance patch too. And of course, there are new goodies on the Moto vendor already, including new buff food and a bauble node for home instances.

Also worth pointing out are some new bits in the cash shop today: returning themed items like bunny ears (naturally), but also an “Istani Isles Mount Select License” for 1200 gems – that allows you to hand-pick a mount skin from the new bunch of skins rather than gamble for one. But don’t worry, whales; you can still grab a gamblebox for your mounts for 400 gems a pop. 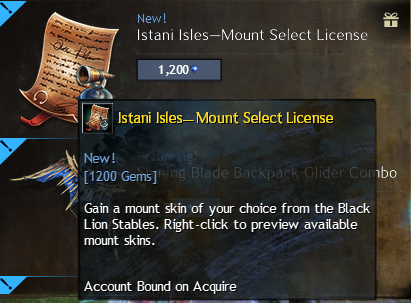 And clearly, the best news of all? CHAIRS.