END_OF_DOCUMENT_TOKEN_TO_BE_REPLACED
Even though I don’t believe that Summerset was the best choice for the next expansion for the Elder Scrolls Online, that doesn’t mean that the chapter is without merit. According to ZeniMax Online Creative Director Rich Lambert, Summerset will be bigger and have more to do than Morrowind. It’s hard to believe that the actual island is bigger, but I do believe that there is much more playable area on Summerset than on Vvardenfell because it doesn’t have a giant volcano sitting in the middle of it taking up a lot of room.

Because this island hasn’t been seen since Elder Scrolls: Arena, it’s hard to know what to expect from this land. We know that certain things exist, like the Crystal Tower and the home of the Psijic Order Artaeum, but we haven’t ever really seen some of these places in any games.

Because I’m a lore buff, I’d like to take a few moments to talk about the first settlers of the Summerset Isles, the Aldmer and their “purest” descendants, the Altmer. But really, I’m only going to be able to scratch the surface of this deep and isolated culture.

It’s interesting to me that the Aldmeri Dominion in ESO includes the Khajiit because they are not descended from Aldmer at all. Before the Altmer, Bosmer, Chimer, Dwemer, Dunmer, and most of the other mer races existed, there was one race: the Aldmer. Hailing from the mythical continent of Aldmeris, the first mer race landed on Tamriel somewhere during the Merethic Era. There are some records of that time, but most stories come from legend.

For those keeping score at home, the Merethic Era includes almost all the of Pre-History. We don’t know how long it was before King Eplear of the Bosmer declared the First Era by founding the Camoran Dynasty, but we can assume that it was thousands of years after the first Aldmer settled on the Summerset Isle, even thousands of years after the White-Gold Tower was built in Cyrodiil.

For the most part, the Aldmer kept to themselves, allowing the other species like the Khajiit and Argonians control the mainland of Tamriel. But over time, many Aldmer began exploring beyond Summerset Isle. Topal was one of the first individuals recorded as having stepped off the isles and separate himself from the main Aldmer people. 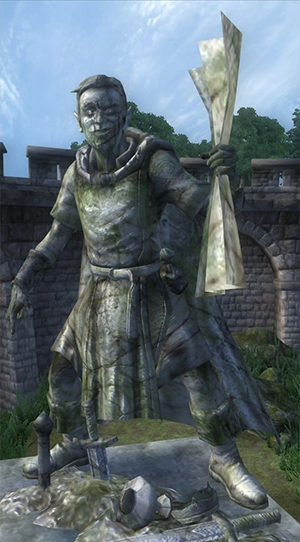 Elder Scrolls as a franchise rarely hits you over the head with the deep history of the game. Instead, you are left to discover things on your own through books and tiny discussions with the people you encounter during your adventures. On bookshelves in ESO, you might stumble on a book called “Father of the Niben,” which is a historical document commenting on the only written text about Topal the Pilot. Unfortunately, we only have two of the four fragments in ESO. If you want to read the whole thing, you’ll have to visit it in Skyrim or Oblivion.

In the text, we clearly see that Topal was one of the first Aldmer to encounter the other races of Tamriel. For instance, he calls the Khajiit “cat-demons” and cliffracers “bat lizards.” Yes, that means that Topal touched the island of Vvardenfell and traveled well into the mainland Morrowind well before the Chimer ever stepped foot there.

Topal set out on his journey by orders of the Crystal Tower. He was tasked with finding Aldmeris, but of course, he never found it. And whatever happened to Aldmeris or why the Aldmer left in the first place remains a mystery.

The mer races have long speculated about what happened to Aldmeris or whether it existed at all. With the failure of Topal the Pilot, Aldmeris became even more of a mystery, and heavy skepticism about its existence took hold. There were two prevailing theories about Aldmeris for those who still believed in it.

According to legend, Aldmeris didn’t consist of lush natural landscapes like much of Tamriel, but rather it was an endless city, buildings built on top of themselves until all the land was quenched of its natural life. It’s was said to resemble the Crystal Tower but never-ending. Personally, I imagine Clockwork City, but with fewer gears and more crystals. High Lord Torinaan left Aldmeris because of a “doom oblivious.” But no one really knows what that means.

One theory says that Aldmeris sunk into the sea and is now sitting at the bottom of the ocean, much like the stories of Atlantis on Earth. The gods were angered by the Aldmer and sunk the whole city. Others say that Aldmeris left Mundus and will only return if everyone is united as one. If that hasn’t happened after six games spanning centuries, then it will never happen.

TES III and fan-beloved writer Michael Kirkbride describes what Aldmeris really is in some of his non-canon writing that can now only be found on the Imperial Library.

The Aldmer began to split along cultural lines, on how best to spread creation and their parts in it. Each Tower that was built exemplified a separate accordance.

This sundering of purpose is the myth of the “destruction of Aldmeris.” Outside of the Dawn, and even then only in the dreamtime of its landscape, there was never a terrestrial homeland of the Elves. “Old Ehlnofey” is a magical ideal of mixed memories of the Dawn.

Do not believe the written histories.

All mortal life started on the starry heart of Dawn’s beauty, Tamriel.

I guess the question now falls to you. Where do you believe settlers of Summerset and Aldmeri came from? Do you enjoy the way the Elder Scrolls series plays with its own history: never really knowing the truth? And of course, are you excited about the next Chapter in ESO as I am? I’d love to read your comments below.

This WAS a great article. I w3ould like to see more of this type of thing. I love the lore behind games and this was right up my alley. Good job

Great article, Larry. Love the stuff about ESO lore. The Aldmer origin story is, suprisingly (to me), quite similar to my favorite MMO lore, EVE: People leave their homeland (Earth), settle in a new place (New Eden), eventually try to find their way back (EVE Gate), fail in that attempt, and eventually the homeland (Earth) becomes myth.

EVE lore to me is the most appealing element of the game. I so wish there was more PVE content to drive the story forward as opposed to just relying on faction conflicts.

Reminds me of Battlestar Galactica in some way ^^.

Great article, how ever I’m turned off by performance issues in the game; I recently switched from Wireless 4G/LTE Internet to Cable Internet with 200 Download Speed, yet I still sit at 130 Latency, and spike into 800 when I’m on a mount or if I have players around me. So I’m back to GW2 for now since it runs very well despite the recent server migration to Amazon.

Does any one have any suggestions to fix ESO’s Latency or is it just something you’re supposed to ignore and put up with?

I’ve played ESO for a couple years and have never experienced any latency outside of some difficulties with Cyrodiil some time ago. Perhaps there is an issue with your ISP?

I have Spectrum, other than that do add ons cause latency, basically anything suggested I threw on there?

There’s so many possibilities of what could be wrong and potential solutions that’s it’s hard to make solid recommendations, but I’ll suggest a couple:

1. Leatrix’s Latency Fix – it’s usually talked about for WoW, but the fix works for multiple games. I’ve used it and never really experienced a difference, but my latency has never really been bad. I was just trying to see if I could make good latency better.

2. You could try a VPN service of some sort. There’s some advertised out there specifically for games. However, many of them carry a small monthly fee.

3. Talk to your ISP. You’ll probably get a headache and spend many hours trying to get through to someone who knows basic networking, but if you can then they may be able to make further suggestions and tell you if it may be worth trying out a different router/modem.

Addons do cause latency if you’re using too many of them or if the ones you’re using are demanding for your computer and/or the game (it is often explicitely listed in the description by the addon author).

Maybe it’s your connection that’s the problem. I’ve had killer connection from the first day I got connected to the internet at home. I never had problems with latency in the game.

I actually thought we would see Black Marsh this time around…but I have to say they have me intrigued.

The Stream Team: Taking Path of Exile gardening to the next...