As you may recall, I was given just a little time to hit up Snail Games’ ARK Park a few days before I left for GDC 2018. I was able to make it to the games’ launch party, but as I’d already played the game, it was mostly useful for talking to people involved in its creation between speeches/demos. However, afterwards, I was allowed to pass some questions on to Snail Games Vice President Tianqi “Sky” Wu about bugs, science, and the future of ARK. We have some exclusive information about that last tip, but don’t worry, no chief engineers, computer programmers, or lawyers were harmed in the making of this game. Well, not physically, at least.

While I liked the idea of ARK Park from the announcement, I also remember thinking to myself, “Why not just fix ARK‘s current VR issues?” When I asked this to Wu, he replied via email that Snail “envisioned ARK Park as its own title – not just a VR conversion of ARK: Survival Evolved.” Rather than work with the survival sandbox that was already there, Snail “wanted ARK Park to be a cutting-edge VR experience that would welcome all sorts of players.”

Of course, much as in Jurassic Park, things can go wrong. Wu mentioned that developing the company’s first VR game was “quite challenging.” For example, the team “originally went with teleportation because it’s considerably less ‘nausea-inducing’ than free locomotion.” While that’s true, I mentioned I had brief moments of it popping up during my review period with the game, which I thought might partially be due to bugs. I may have been right.

Wu says that some of the bugs reported to Snail, like UI issues, were limited to specific GPUs. “We addressed a good chunk of them on March 24 with an emergency patch,” he assured me. I haven’t had time to return to the park yet, but I’m curious to see what all’s been fixed, especially since Wu said it was enough to get some reviewers to change their Steam scores.

Wu went on to say that, post-launch, Snail’s “received plenty of input from players across all supported headsets requesting free locomotion” and that Snail’s “currently planning to add it to the game […] perhaps in a future update!” While a nice idea, I’d like to warn our VR enthusiasts that free locomotion can go very, very wrong. Take it easy so you don’t have any bad VR rides like I did.

Back to the future

Wu was able to share some other neat information about the future of ARK Park as well. For example, the PSVR version of the game is “not yet able to cross-play with PC users.” We’ll see if that changes, but at least for the moment, non-VR enthusiasts may be out of luck. Wu said that Snail’s not planning to port ARK Park to non-VR platforms. “Some games start as normal 2D/3D games and then get converted to VR,” Wu says. “However, ARK Park was created as a VR experience first,” and the team plans on pursuing that direction “with all additional content.”

That’s important because Snail isn’t done with ARK Park. Not in an “Early Access” not-done, but a “the first DLC is already in the works and should be available in June” not done. The team has “plans for a large number of expansions,” but is currently “listening attentively to the community (and the press!)” about “must-fix issues.” After that, they’ll “continue the post-launch development cycle with DLC that delivers new content – and gameplay that greatly expands the world of ARK Park.”

We’ll see how it goes. Remember, since I got to play before the general public, I wasn’t able to experience any online multiplayer. Wu tells me that, so far, the team’s getting “getting positive feedback.” Most of what he tells me is about shooting, but apparently the exploration maps work in multiplayer as well. It’s only up to four players right now, but this is partially because Wu says, that “the best way to start a multiplayer session is to create a room and invite your friends.” I know maybe one other gamer with a VR headset, and he’s not really using it either.

That being said, maybe Snail can find a way to get more people into VR in the future with help from the ARK IP. Above, you’ll see that the multiplayer lobby for ARK Park has an ARK community section, a weird “Earth,” and ARK: Survival of the Fittest. I asked whether these are all going to be playable via some kind of lobby connecting all the games or this is just for VR versions?

Wu said: Yes, this is some of the content that we are currently working on. The “individual planet” idea was inspired by Ready Player One. Since ARK Park is more of a casual VR experience, it ends up being suitable for the whole family. Survival of the Fittest, on the other hand, is quite hardcore and is only meant for adults! It just made sense to separate them into different planets – just like in Ready Player One (where you have PVP zones and PVE zones, for example). 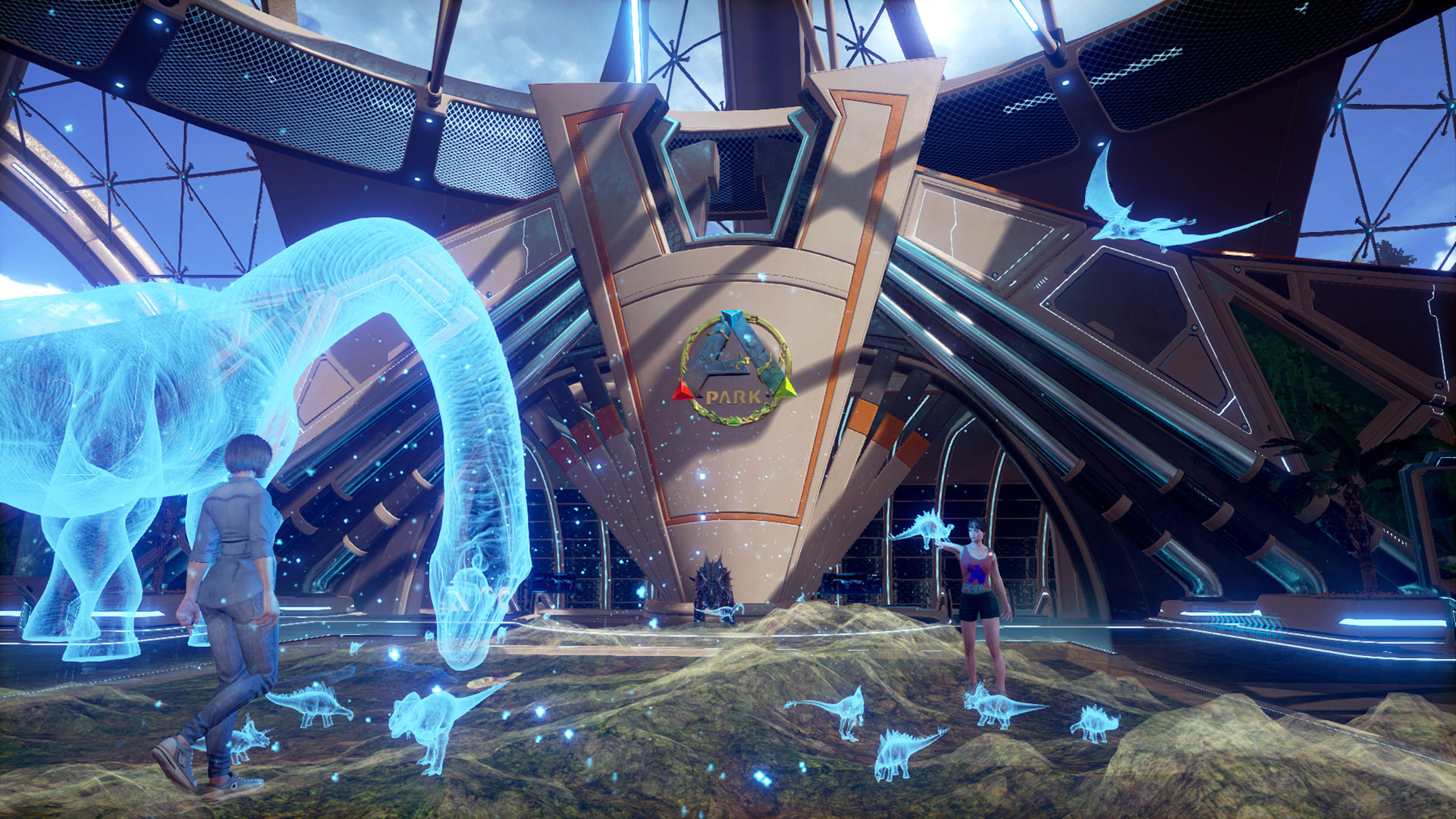 The problem for, though, is that a lot of what I saw felt like it repeated the same mistakes as other VR games. Again, let me praise the Pokemon Snap moments. The idea of exploring small, contained virtual scenarios in that fashion – with virtual friends – seems really cool.

But a lot of the game still feels centered on shooting, something we’ve been doing forever and rarely excites the gamer in me. Wu tells me that gameplay was added as another nod to ARK: Survival Evolved fans, but it still disappoints me that this went in instead of, say, actual park construction with friends. Games like The Climb still impress me more than a shooter, and the idea of making habitats, seeing how dinos react to each other, and heck, climbing a big ol’ brontosaurus all sound much more unique to a VR experience than shooting stuff again.

Maybe it’s the teacher/researcher in me, but VR seems like it could be used so much better for mixing in more education, not just for the sake of learning but for making a better-grounded reality. I brought up my concerns about the science behind the dinosaurs in ARK Park, as Snail has tried to push a bit of an educational angle, but Wu says, “Every dinosaur and creature in ARK Park originates from ARK: Survival Evolved.” The team did reference “current research to better sculpt [the dinosaurs] as life-sized 3D models,” so there was an additional layer of research, but much like adding a few feathers on a velociraptor in Jurassic Park, larger (or smaller) issues naturally remain due to building on top of someone else’s work.

VR PvP sounds fun enough, but I wonder if the user base is really there, or if it can really expand the VR audience. I’m looking forward to seeing what Snail does with ARK Park though. Among the ARK spinoffs, the park seems like it has the most VR potential.

Thanks again to Tianqi Wu for setting aside time to answer our questions!

Massively Overpowered was on the ground in San Francisco for GDC 2018, bringing you expert MMO coverage on everything (and everyone!) on display at the latest Game Developers Conference!
Advertisement