END_OF_DOCUMENT_TOKEN_TO_BE_REPLACED
With April Fool’s Day falling on a Sunday, Passover, and Easter, I didn’t actually spend a lot of time on the internet watching the pranks and funny videos. Even Star Wars: The Old Republic didn’t have its normal joke videos or Cartel Market sales. However, the SWTOR influencers did have a little bit of fun. SWTORista, Kid Lee, and especially Vulkk participated in a little bit of fun on the prankster’s holiday by making videos about the game.

Sid Caeser is quoted as saying, “Comedy has to be based on truth.” And I was surprised how close to the truth Vulkk’s video was. But that’s not the only things that as hitting home with long-time SWTOR players and even the most loyal fans of the game. Let’s take a few moments to talk about Vulkk’s video and the recent changes to the Cartel Market.

Vulkk has been a long-time player of Star Wars: The Old Republic. He works hard to give his followers an honest assessment of where the game is, what’s coming soon, and why he still plays it. On April 1st, Vulkk launched a video that hit home with me and also many other players of SWTOR. Given the date, I should have known exactly what the video was about. Perhaps it was Vulkk’s sincerity or the truths that the playful lie hit on, but I fell for it all most completely.

Vulkk starts out the video by talking about a few expansion and that 5.9 would be the end of the traitor storyline. These are two things that have been speculated on for quite some time, and Producer Keith Kanneg all but confirmed that there will be an expansion later this year in his roadmap. But I think the big bit of truth that Vulkk hit on was that the future addition to the game would focus on the conflict that has been missing from SWTOR for a long time: Empire vs. Republic.

In another interview with SWTOR Central, Community Manager Eric Musco and Creative Director Charles Boyd hinted that there will be more of a focus on that conflict in future additions to the game. (And for those who were wondering, that video was not an April Fools’ Day joke.) They might have been saying that because of the PvP-focus of the questions, but regardless, focusing on that kind of conflict was highly desired. 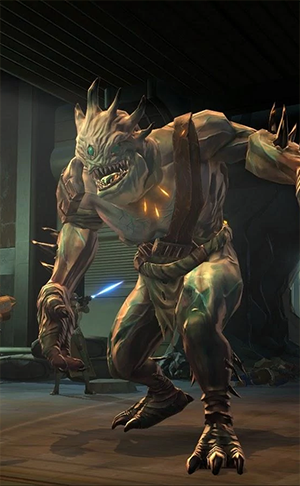 I think another reason Vulkk’s video nearly had me fooled was that it hit on things that I really wanted and that other SWTOR fans have brought up so many times before: We want more. Although there were complaints about it — as there always are — Shadow of Revan was the last complete expansion for SWTOR. I say this because it not only gave us a great additional story, but it also gave us more PvP maps, more flashpoints, and two operations. The “Knights of” expansions put a lot of focus on the story and had their own positive points, but the last time we received a well-rounded expansion was SoR. And people have clearly missed that. (And here I should probably remind everyone that SoR launched a little more than three years ago.)

Vulkk’s video mentioned Taris, a planet that over the centuries has played a big, unwitting role in the Empire’s conflict with the Republic. It’s also been the central planet for the Rakghoul plague, a storyline that has always stirred a lot of excitement among Star Wars and BioWare fans.

Vulkk’s prank was completely believable until he mentioned a new class being unlocked through an operation boss fight. Then I had to shake my head for a couple of reasons. The first being that unlocking a whole class by beating an operation boss was too much, even for SWTOR, and also the SWTOR developers have said that they have no intention of creating a new class because of the amount of work that it would take to design that story and balance it with the existing classes.

You almost had me, Vulkk, but you hit the mark with players’ expectations. It appeared that you were speaking directly to the player’s desires, something that SWTOR developers have been missing for some time now. But thank you for a very entertaining prank.

The Cartel Market managers put nearly everything that has ever been on the Cartel Market back onto the Cartel Market yesterday. Armor sets, like the Carth Onasi set, to droid companions, like the probe droid, are on sale right now. They all fall into a reasonable cost based on their marker rarity. For me that means, they run 100 to 1,000 more Cartel Coins than they are worth. But that is what it is, and nothings going to change that. I’m just glad that I can grab them from the GTN for a bit cheaper than usual now.

This change brought with it a bit of excitement and also a bit of concern. On the bright side, it’s possible that direct sales have started to take off for the Cartel Market, and the Cartel Market managers have started to listen to things that I have said for years. On the not-so-bright side, this could be a telltale sign of financial issues within the development team. Someone in game mentioned yesterday that it appears to be a kind of going-out-of-business-sale. “Everything must go!” Of course, that has some people concerned. Unfortunately, I’m not certain which one it is either.

I’d like to turn this over to you now. Is there a correlation between these two stories? Do you think it’s possible for SWTOR to reach the Shadow-of-Revan level of content again? Is the Cartel Market sale a precursor to doom, or is it the salesmen finally grasping concepts they should have from the beginning? Let me know you thoughts in the comments below.