END_OF_DOCUMENT_TOKEN_TO_BE_REPLACED
It’s funny how presentation problems can have such a huge impact on the same product.

Warframe, as a game, is almost crippled by its lack of guidance and the poor resources it has to explain things to players. Some of this, as has been noted in the comments, is the result of a general design philosophy that producing more fun stuff is more advantageous than providing guidance, but some of it is also a result of having a philosophy that doesn’t seem to take full advantage of its business model. Better tutorials and direction would do a whole lot to redeem the game.

This would be a good thing because Warframe is also strikingly unique and fun in a lot of other ways, and it seems to be to be the logical apotheosis of a lot of game design aspects. It has flaws, it could use some streamlining and refinement, but at the end of the day it’s a slick and fun experience that is mostly let down by its failings in guiding players. And it’s another game that I’m not really done with even though my month is up. 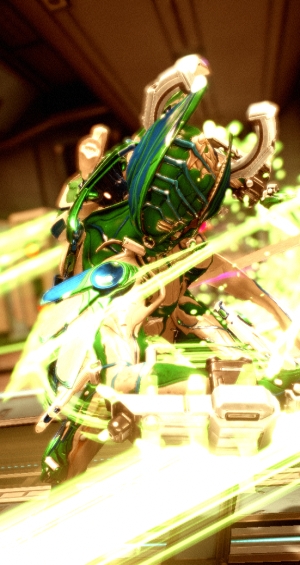 So what goes wrong with player guidance? Simply put, the title commits two sins that make getting into the game a whole lot harder than it needs to be. It doesn’t offer players even a toehold to get into the systems while requiring understanding of same, and it fails to give players the opportunity to compare and contrast options early enough to understand those options.

Both of these things come back into play via something that I’ve ranted about multiple times: the eponymous frames. The intended design is that each given frame is unlocked via farming the components for three specific parts of the frame, then crafting those, then crafting the frame. You unlock different components as you progress through the various planets, with each planet having a frame that “belongs” to it. They’re usually the guardians of one gate.

All well and good in and of itself, but this is the only way to get new frames, and it’s also never explained or outlined. You also get no actual choice in the matter, and there’s no “try before you buy” in action, even if you’re only “buying” the frame with in-game currency and resources. You have to commit blind, and it’s very possible to wind up “stuck” with frames that don’t really augment your playstyle for a long time.

The friend who has served as one of my primary contacts for the game pointed out that the obvious similarity was ships in Star Trek Online; there as well, you’re going to need to probably start buying ships at some point if you aren’t subscribed. But by the time you reach that point in development, you’ve gotten a chance to play around with the main ship types of the game, so you have at least some idea about whether or not you want a Cruiser, an Escort, or a Science Vessel. You get to make the choice and play around with things well enough that before you have to commit to a choice, you’re taught how to value the choices and take a guess about what you’ll want.

I don’t know if there’s an easy and elegant solution to the problem without doing some notable rewriting, but I keep thinking that this way doesn’t exactly work. (The obvious comparison are characters in a MOBA, but those games rotate through a consistent list of free options on top of ones you can purchase; a system like that wouldn’t work with Warframe’s structure.) But I also think that even just giving players a couple more early chances to choose between several frames early on would make a big difference, even if the total list of “free” frames stays fairly short. Since these are the functional classes of the game, it’s too easy to feel like you’re playing with half a deck.

Once you do have the options, of course, a lot of this goes away. In fact, that’s one of the strengths of the game! A given assault rifle is not inherently interchangeable with every other assault rifle, nor are their changes as easy to address as “well, this one has slightly more ammo but slightly less accuracy.” My point of mental comparison were Mass Effect 3 and Mass Effect Andromeda, which had very different systems but a similar sort of variety.

The game also does a good job of making solo gameplay and group gameplay engaging without making them overly difficult – or at least, not difficult in fake ways. It’s very easy to tell when you’re taking damage and enemies felt like their health bars were manageable; at the same time, failing to pay attention makes it easy to get overwhelmed or hedged in, and individual frames (at least at lower levels) can’t stand up to endless assaults.

It’s just that you have such an aggressively constrained set of options early on, and so little indication of when that will change, that it’s easy to feel underwhelmed. The cynical part of me thinks this is even by design, considering how early the market opens and how earnestly it tries to beckon you into just buying stuff. I would almost prefer a straight buy-to-play option with other ways around this, but that might just be me.

What helps, of course, is that these problems are at least temporary. Once you know all of the “right” answers, the game settles into a smooth, enjoyable groove. It’s not going to blow your mind, but the core mechanics are solid and fun, and while you’ll be repeatedly doing the same basic things those basic things are, y’know, fun. Refinement and improvement actually work out all right.

And the lore and the story are also a whole lot of fun; it contains a lot of tropes that I particularly enjoy, not the least of which being that your character has a reason for not knowing a lot of what’s going on without feeling inherently out of line. I wanted to know more, but I never felt like I was missing crucial bits of context. Your enemies feel appropriately weird and threatening without being straw constructs, and the game does a good job of hinting at greater depth while not implying you’ll necessarily see it.

Were the game single-player only, it’d still be pretty good. As it stands, it’s a game that I have no intention of just leaving behind, even if it keeps me from being completely sold on it just yet. There are some deficiencies and problems, and they’re going to serve as major roadblocks for some players, but there’s a lot of worthwhile stuff there too if you’re willing to dig.

Now, if they’d like to offer another free Prime option since I finally realized I could get that for free, I sure wouldn’t say no.

The time has arrived for our next selection of places to go, and we’re starting out by going a bit further afield. For example, our first option is PixARK, a game that has just entered into early access in a genre that is not exactly my jam while also owing lots to several other games. Yet this is also a title I was super excited about from the day it was announced, so perhaps it’ll be exactly what I want. We’ll find out!

Or maybe we won’t find out, and instead I’ll be heading into Ultima Online. I’ve never actually played Ultima Online, due to never having any particular interest in doing so, but as of today, the game is actually free-to-play for the first time in two decades. Is the game worth checking out as a new player at this point? I don’t know! Bree certainly thinks so, but she’s not me.

Last but not least, maybe I’ll head to a different older title that is now in a very different space, Final Fantasy XI. There’s a whole lot of interesting stuff here and lots of large-scale differences from the game’s original launch incarnation, so there’s more than enough space to make this interesting. (And as mentioned elsewhere, while this is a title I am very familiar with, it would also serve as a chance to do some different sorts of material.)

So which game shall I explore next? Let me know with voting!

CMA: Pick our next destination!

As always, votes end at 6 p.m. EDT on Friday. Feel free to leave feedback and opinions down in the comments, or mail them along to eliot@massivelyop.com. It’ll provide a respite as I relentlessly deal with a convention crowd for the next couple of days.

Welcome to Choose My Adventure, the column in which you join Eliot each week as he journeys through mystical lands on fantastic adventures — and you get to decide his fate. If you think “decide his fate” means “make him unhappy,” joke’s on you, he’s already unhappy.
Advertisement

Shroud of the Avatar assures the game ‘is not going away,’...