Everyone knows that the various people portraying characters at PAX East are just there to portray a character. That’s not who they really are. Just because an attractive young woman is dressed up as a character in a way that cleverly circumvents the event’s ostensible policy against “booth babes” does not mean that she is actually a bounty hunter, for example. (She could be, though. We’ve all got side hustles.) So it should come as no great surprise that the Guild Wars 2 griffon was itself playing a part, just like the other actors on the floor.

I was lucky enough to sit down for an interview with “Feathers” (it specified that its real name would break my eardrums) on the show floor, and since I was sitting very still to avoid triggering its instinctive hunting reflexes, I could also record everything it said perfectly. So please, to cap off our PAX East experience, enjoy my interview with this mythical creature of sand and wind.

Massively Overpowered: Could you please state your name for the record?

“Feathers”: Just call me “Feathers.” We already covered this.

It’s important to have these things on a transcript.

It’s also important not to perturb creatures that see squirming little things like you as a meal.

Point taken. So, how did you get this particular opportunity?

Well, most of the modeling work for griffons these days involves preparing for security corporate logos, so my chosen career has certain limitations. Still, I wasn’t doing much else with a Comparative Interacting With Your Food BFA, so when I heard that there was a spot open to be posed as a statue for a video game convention, it seemed like a good idea.

Are you at all familiar with the game you were representing?

This is the part where you’re trying to get me to read off the bit about how my views don’t represent the views of anyone over at the arena, isn’t it?

This is much more annoying than just eating you. Fine. Whatever you need so we can move on.

I suppose there’s also the genuine question to answer…

My talons can tear a car door in half. You might not be surprised to know that griffons are rarely involved in computer games.

Ah, because you can’t find a keyboard to use?

No, because tearing car doors in half is a lot of fun. Wouldn’t you prefer to do that?

So how has your convention experience been?

Well, let me tell you something, snackbag. I’ve done a lot of various conventions over the years; the tabletop gaming boom in the ’70s was really good to me. And I must say that this is actually one of the worst experiences I’ve had as a mythical creature, something that lines up nicely with reports I had heard from previous years thanks to the electricity demons.

Hold on, back up. The electricity of the building is powered by demons?

Look, if I have to explain all of the ways that you’re wrong about science, we’re never going to be done here. And the longer this takes, the hungrier I get.

The electricity demons had told me that this building was bad about giving them proper access to do their job, and that there were a lot of unreasonable demands placed upon them by the organizers. That alone seemed kind of counter to what I would have expected; after all, how are you going to run something like this without electricity? But it seemed that as long as the mythical creatures were being treated all right, we could at least occasionally do favors for the electricity demons.

But this year, it was as bad for me as I’d heard from the demons. And I’m not even electrical! I was told that there would be a port opening for me to swoop in before the audiences arrived, but instead I had to wait in line with every other mythical creatures and even just fans. Worse yet, the building refused to provide bedding for me, and there’s not even accommodations made for food and water. 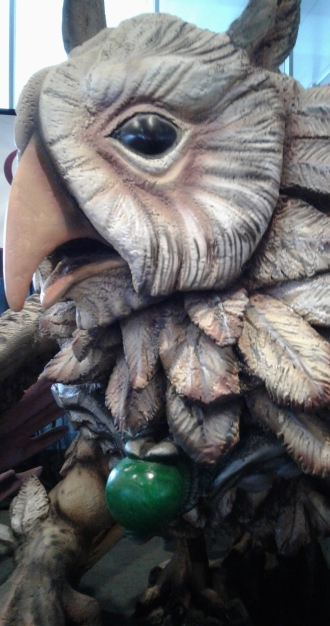 That explains why you keep looking at me with hunger in your eyes.

It explains half of it.

Are you rather exhausted, then?

It’s not that I don’t want to be here, you understand. So much of my work is done behind the scenes, it’s nice to engage with people. But this event in particular seems to be built around entitlement and a lack of understanding that we are, in fact, here to work. This is a job, not recreation. It’s like the people organizing it think that our jobs are just never-ending vacations.

And that’s not true, is it?

If this were a vacation, I’d be eating half of the people who climb on my back. There was a guy earlier wearing a shirt that was just, like, covered in barbecue sauce. Do you know how hard it is to get barbecue sauce for a griffon?

Seeing as you are currently drooling, it seems that redirecting might be a good thing. Are there any parts of the experience you’re enjoying?

Of course there are. There are lots of fans of what I do – you know, being a flying engine of death with a primal connection to the winds – and you don’t really get to interact with them when you’re just modeling for stuff. So it’s nice to meet people you’ve affected positively. Plus, talking with reporters is fun, there’s a certain amount of professional understanding there.

We reporters do have a primal connection to various things, yes. But it’s still draining for you?

It’s four days of nonstop work with only the slightest bit of downtime, and that downtime is itself often filled with events or just the irritation of cramming into a tiny roost under a bridge instead of your proper aerie. The whole thing is draining, and this one seems particularly so. Even for the humans.

Is this where you mention how tired meat tastes different?

I have eyes, you know. It’s obvious you’re tired.

You also taste different, but it seemed rude to lead with that.

So… do you think you would come back?

Honestly, if the job required it I might, but otherwise I wouldn’t. The fact is that this is a lot of work, and it’s not meant to account for my presence, nor does it have a lot to offer someone like me. The fact that the organizers make it so difficult to actually work here is particularly unpleasant.

Well, “Feathers,” thank you for your time.

And thank you for sitting so still. Now… I believe our agreed-upon compensation was eating one of your limbs?

Does it have to be one of my limbs?

Hmm. You can make a more compelling offer?

Let me put my notepad away.

We’d like to thank “Feathers” for its input and patience in answering our questions. We’d also like to offer our apologies to any Red Sox fans who found out that the hastily scribbled “Fan Bird Day” signs were actually leading them to a hungry and rather ornery griffon, but we don’t think most of them are paying attention.

Thank you, Eliot. If you interview “Feathers” again, bribe it with barbeque sauce and meat and keep your limbs. ;)

I was greatly amused by this interview. I hope you manage to do a follow-up at E3. I know he can be a bit “flighty” though and hard to pin down.

I also won’t be looking at my griffin in the game the same way now.

Vague Patch Notes: BlizzCon’s cancellation might just be for the best

The Daily Grind: What are the MMO starting zones that feel most welcoming to you?

Path of Exile patches in a new renderer and shares some...

Fallout 76’s next update, which includes seasons, is over a month...

The Daily Grind: Should gamers be entitled to jump MMO queues...