END_OF_DOCUMENT_TOKEN_TO_BE_REPLACED
Let me teach you how to understand Mephala the Webspinner. Maybe that’s misleading; she’s a Deadric Prince, and who can really understand the motivations of a god, especially one as complicated as Mephala? That’s also what is really wonderful about the characters in Elder Scrolls Online: They never seem to be all good or all bad. There always appears to be some sort of nuance about them that requires explanation.

If you buy the physical Collector’s for Summerset, you will get a 12-inch statue of Mephala, which might be the first collector’s edition of ESO that I buy, and it’s because of that statue. During the introductory livestream for Summerset, Creative Director Rich Lambert simply said that “she plays a role” in the upcoming expansion but didn’t really go any further than that. But if she’s like any of the other featured Daedric Princes, she’s likely one of the formidable enemies – maybe the main enemy – for the chapter. But if the story falls in line with Mephala’s character up to this point, it’s likely that the story is more complicated than her being the villain for Summerset.

First, we should talk about Mephala’s history in the franchise, but then I have a fun theory that I’d like to share.

Appearances of the queen of spiders

In Elder Scrolls Online, we didn’t really see anything about Mephala until the Shadows of the Hist update a year and a half ago. In fact, if you’re interested, I did a playthrough of the Cradle of Shadows dungeon with the developers just before launch. It’ll give you some insight into what I’m talking about today.

But I’m not certain that the story of that dungeon is exactly representative of what Mephala is all about considering that it focuses on the Silken Ring, an assassin group for Mephala. There is a bit of a grudge between them and the Dark Brotherhood. Since the Dark Brotherhood aren’t exactly the good guys, it’s hard to call the Silken Ring the bad guys even though that’s how they were presented in that dungeon. 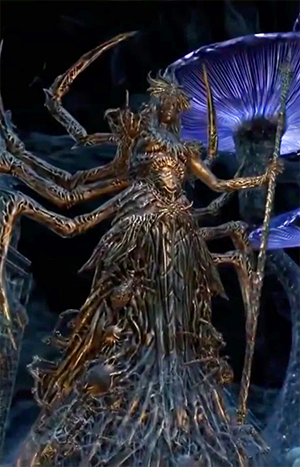 Mephala’s influence in the TES universe — like that of all Deadric Princes — extends well beyond the scope of one game. Mephala’s appearances date back to Daggerfall, and she was even mentioned in Arena. But if you’re looking for her specifically, rather than just her minions in ESO, then you’ll have to find the Arbordawn Cult questline in Reaper’s March in Valenwood. (Find the Altmer woman named Andewen to begin it.) The truth is that Mephala doesn’t really make a strong appearance there, and she is in her most humanoid form. She doesn’t even have extra arms like she does in Oblivion.

If you’ve experienced Mephala only in ESO, then you’re likely going to believe that she is just as evil as many of the other Daedric Princes, but you’d be wrong. She’s actually considered a good Prince. But if you know Daedric Princes, you’ll also know that good is very relative when it comes to the Daedra. She was worshiped by some of the Morag Tong. In fact, some of the Dunmer believe that she is part of the rightful Tribunal, but that’s found in only one book in Skyrim: Dragonborn called the Reclamations, and might not be historically accurate for the ESO time period.

Relics of the Mephala’s web

What we do know is that Mephala gives gifts. Maybe that’s what makes her good. There are two artifacts that were gifts from this Daedric Prince that could pop up in ESO. The first is the Ebony Blade. I do hope that we see this in Summerset.

I haven’t played Arena, so I don’t know for sure if it makes an appearance there or in Daggerfall, but I do know that it’s in Oblivion. It’s a very quite blade and the victim will not detect the assault, and it absorbs health from the victim. I also like that it’s fairly unassuming, looking just like a katana.

Possibly because I like the stealthy parts of ESO, but I also hope to see the Ring of Khajiit. It’s Mephala’s relic, but it was made famous by the thief god Rajhin. The ring made him invisible and “as quick as the wind” according to the quest giver in TES III: Morrowind.

Beyond this point, I’m going to speculate about Summerset. I don’t have any insider knowledge about the chapter, yet, and I have not talked to the developers about the Mephala, either. So if there are Summerset spoilers in the next couple hundred words of this article, it’s because I might be really good at reading between the lines.

Let’s connect the dots. Mephala, despite being a Daedric Prince, has been known to be benevolent, and if you’re an Ashlander or Morag Tong, then she’s a good Daedric Prince. Even though you fought against her followers in the Black Marsh, that was as a representative of the Dark Brotherhood, and we all know that the Dark Brotherhood and the Morag Tong really hate each other. And Rich Lambert did not say that Mephala was the bad guy in Summerset. He simply said that she would play a role. To definitively say that Mephala is the bad guy is probably a stretch.

ZeniMax loves to put twists in its stories; just look at the Morrowind main storyline or the Thieves Guild plot. There are twists, turns, and misdirects all over the place. And in a recent post on the official ESO website, I see what are likely misdirects or clues to a major misdirect. In the letter within the post, Altmer Queen Ayrenn calls Alwinarwe her “favorite and most-trusted cousin.” It doesn’t seem suspicious by itself, but there are clues set up where it appears that maybe she shouldn’t be trusted. “I have heard it said that you are old-fashioned and set in your ways,” and when talking to her about Razum-dar, a helpful character in the base game, she wrote, “Try not to let past grievances color your perspective. Razum-dar, well, that’s just his way. He rarely means anything by it. And he really is good at what he does.”

My guess is that our true enemy in Summerset will be Alwinarwe and any quests that we are sent on by her is just her attempting to secure her power over Mephala, who is probably trying to help in some way. But then I could be wrong, given the pre-Summerset questline that has us fighting Mephala’s agents attempting to find a path to Artaeum.

What are your thoughts? Let me know your theories in the comments below. I would love to read them.

Wasn’t Mephala only considered to be “good” by the Dunmer? She is the Daedric Prince of lies, secrecy, and murder. I’m pretty sure the other non-edgy races don’t consider her to be benevolent.