When a game is being created, you usually expect that development to move the title in a positive direction and make it better, right? The state of the game when it launches should be much better than when it started. Well, sometimes that doesn’t quite happen. In ARK: Survival Evolved’s case, I think there are instances when it did just the opposite; certain aspects of the launched game were worse than the earlier versions. However, that’s not the case for everything: There were also a number of ways the game was definitely improved. Does one outweigh the other? Is the game better, or is it worse? It might depend on which features you feel are more important for the game and the side that they fall on.

While not exhaustive in either case, here’s a list of four ways that early early access ARK was better than the launch and four ways the launch version is better. Then tune in next week for four hopes for a better future.

1. Holidays used to be great

Although the Valentine’s and Easter events of 2018 have been a bit better, ARK events had a very long dark period where they were terrible — if they happened at all! And that’s after having some great holiday events the first year of development. Holidays went from really fun to a total flop.

When ARK hit the scene, we had something for many holidays. First was ARK: Fear Evolved for Halloween, which included bone dinosaurs, gravestones, pumpkins, and a DodoRex rampaging the island. Next was Thanksgiving, where killer turkeys invaded the island. Those birds were tough! At Christmas, Raptor Claws dropping goodies from his sleigh to good and bad little survivors. Though relatively small ins scope compared to the others, New Year’s had a ball drop that you couldn’t be sure wasn’t going to herald the end of the world!  Spring brought Easter and DodoBunnies that laid special eggs (that could summon a DodoRex). And the summer’s anniversary event was a blast!

Sadly, holidays took a big hit when Halloween 2016 promised players an upgraded Fear Evolved event with vampirism and lycanthropy that didn’t happen; disappointingly, the event was just the DodoRex. After that, the idea of new events seemed to die. The killer turkeys, Raptor Claws, and Dodobunnies returned for their holidays without much new. The second anniversary was also just a repeat.

Then holiday events really took a hit. In 2017 Halloween wasn’t even happening, and when it did, adding it to your server meant a full database reinstall when it was over. And Raptor Claws never returned, but serious bugs appeared (so bad that I wouldn’t even add this event to my server!) — some folks couldn’t even get their servers to work after installing the event.

Yes, Valentines and Easter 2018 say the inkling of a return to events with specialty colored animals to tame and breed as well as a return of holiday-themed costumes pieces. Maybe they herald the return of better events someday, but they are still not back to the level of those early early access months. And speaking of event skins, I’ve never liked the fact that server admins aren’t allowed to spawn holiday items as rewards for players (or to replace ones lost because of game bugs) outside of the event period. Devs offer some reasons for the lack of events, but that doesn’t negate the fact that it was just so much better in the beginning.

The flier nerf, ‘nough said. But in a nutshell, after players got accustomed to a certain style of aerial life, bird wings were severely clipped. For the long version with more details, you can read my discourse on the subject.

3. We had faith in WildCard and hope that bugs would be fixed

Ahh, to go back to those good old days when the studio had a roadmap, back when it was cranking out bug fixes and we believed when it told us things like launch dates because we still had hope and faith in those words. I miss that. Now, there are still bugs that have been plaguing us since the beginning that we just know won’t ever be taken care of. We just sigh and say, “That’s ARK, ” and move on from our losses.

This is a big reason I will never, ever play on an official server again, or even pretty much any other than my own. At least when these bugs take a bite out of play, I can lend a fix with restoration or even a rollback if necessary (and we’ve had quite a few cases where that has been necessary!). Some things, however, can’t be restored. ARK has lost plenty of players who don’t want to support a company they do not believe in anymore.

This may be slightly subjective, but I am definitely not alone in my thoughts. ARK’s performance was much worse at launch performance-wise than it was in the early days. Even with all of the constant patches and development in those first months, the game was more stable. And that is counting all the bugs! Once Scorched Earth hit, things went bad. There were long stretches where players couldn’t even play at all because of that update, and they didn’t even own the expansion! Even on my very good gaming rig I started having difficulty with various performance problems.

I’m sad it happened long after I was done with the Island, but all of the story was finally in place that was missing in the beginning. The explorer notes all those story bits are in, ready to be discovered and to paint a picture of what is going on. Why are you there? You just might find out!

2. Feather and fur pass and other creature features

Dinosaurs are great. One of the reasons — OK, the reason — we play ARK is for the dinosaurs. We want them! We want to hunt them, tame them, and breed them. Seeing dinosaurs up close and personal has got to be one of the most universal dreams of young hearts everywhere. And when Wildcard did the big feather and fur upgrade, the dinos became even more beautiful and realistic.

Now, add that to the long awaited TLC pass for older dinos to increase their value again after so many others were added and made early ones obsolete. Before the official TLC passes the birds were touched up (after that vicious beating with the nerf bat) and gained specialized uses. And then attention turned to other dinos for two TLC passes. Have you gotten the hang of the new sarco? How do you like the direbear and the direwolves? And what is with the Trike’s anger issues? I am excited for the raptors’ pack bonus. And it’s about time the poor, long forgotten parasaur has some reason to be loved again!

Yes, there are many more dinos to go, but things have finally started.  It will be great to have favorite dinos find a purpose again.

Although the long promised improvements to building has never materialized and the promise of S+ integration has not happened, there is one newer building feature that everyone I know is extremely grateful for: the ability to build into terrain. No longer is architecture hampered by misjudging one tiny smidgen. Your final wall piece is blocked by one inch of rock? No problem! Need your pipe to run through a chunk of cliff ledge? Sure!

We recently added this setting on our own server (with more than a tad bit of trepidation; after all, we don’t do mods because of the problems they cause), and building has been significantly better. There is definitely a renewed interest in building, and more creative designs are happening now that one bit of frustration has diminished. 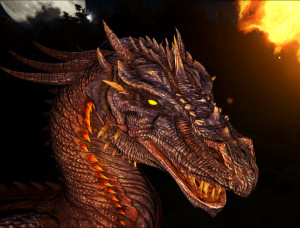 Once you have played on ARK’s island for a while, you come to realize just how small the space is. You really reach a point where you’ve done all there is to do. At that point, interest wanes. So then what? There aren’t new zones to discover… or are there? The game doesn’t expand like traditional MMOs, but there are new places to explore and new creatures to discover. And I am not talking about paid expansions either (of which there are two so far). If you finish the island and don’t want to purchase extra content, you can still do The Center, Ragnarok, and procedurally generated maps to continue your ARK adventure. The Center is huge with massive caves, Ragnarok offers a combination of The Center and Scorched Earth on top of the Island, and the procedurally generated maps can give you a new layout over and over and over again. You can really up the difficulty there as well! More bang for your buck (which is good, especially since the launch price is so much higher!).

Honestly, I think one of the ways that it was “better” earlier in the lifecycle was in the balance of creatures. For a while when I first played, it really felt like there were bad places on the island, and places that you could be more safe. It was relatively easy to build a base that was secure against virtually any (non-human) threat.

Maybe that has been adjusted again since, but at the time, it really made it difficult to play effectively as a small group.

Final Fantasy XI launches a login campaign alongside a returner and...

Bless Unleashed has released its Secrets and Scions update