If you play Guild Wars 2, World of Tanks, EVE Online, or World of Warcraft in Russia, you may find that access to these titles has become spotty or non-existent as of late. This is due to the Russian government cracking down on the Telegram messenger app, which came under fire for essentially allowing people to communicate without being spied upon by intrusive government agencies (and then refusing to grant said agencies backdoors into the system). Over 20 million IP addresses have been blocked in the country as of April 17th, a move that has affected many services and sites not related to Telegram.

The crackdown has basically shut down access to the login servers of Guild Wars 2 and EVE Online for some, prompting outrage and frustration among players who suddenly were not able to access their games.

Wait… so Russia shut down it’s own Russian bot farms effectively then? Where do I send the Thank You letter and cake? The kremlin? To Putin? I need an address.

As of 20th April 2018 EVE and WoW login went normally. Don’t have GW2 client installed. MMORPG.COM inaccessible – again, third time on my memory. To me, others reach it just fine.

Blasted Roskomnadzor… Like we need more screams about tyranny, authoritarianism and liberty suffocated. And to think that Telegram is not that popular. Everyone use WhatsUp.

Is that RT news ?

Now all we need now is a Telegram-type app here in the US. I love in the comments how people are decrying Russia, as if our own government doesn’t do the same exact thing.

Last I checked the US government doesn’t shut down access to a wide range of addresses in a temper tantrum of control. Keep trying to put the US on the same level as some of these other countries though….

no, our government agencies just send undercover agents into the companies that wont give them access and put in the back door themselves our government is the greatest threat to peace and progress and to humanity that has ever existed

EVER? Have you looked at history predating 2010? Or do you not like hearing about things that happened before your birth year?

You can use Telegram, there’s nothing stopping you.

There’s also Whatsapp, which is more widely used by a significant amount globally, and has encryption enabled by default (whereas Telegram doesn’t).

What’s stopping you from using Signal?

It’s situations like this that remind you how good you have it in your own country compared to some of the countries around the world.

As Comey tries to sell books and Russian involvement in the US election is being discussed, there is also some, idk, irony? karma? if Russia bans Facebook

Although for me the most Orwellian/ironic was a government banning the letter N. Which kind of sounds like Sesame Street meets Orwell.

Was wondering where all the bots went!

Fun fact – the Roskomnadzor is so bad, they managed to block a pro-government news site that their director gave interview to few hours earlier.

Its a total mess. Funniest part is – Telegram is still working fine for ~80% of Russian users. They are simply updating the program with new server IPs through Apple and Google’s app store API push feature. 90% of Telegram users and infrastructure is not even in Russia – unless RKN bans The Internets in their entirety, its a battle they simply cannot win decisively. At best, they can disrupt Telegram for some users temporarily, at the expense of screwing up 10x more unrelated applications that happen to use same cloud and hosting services. 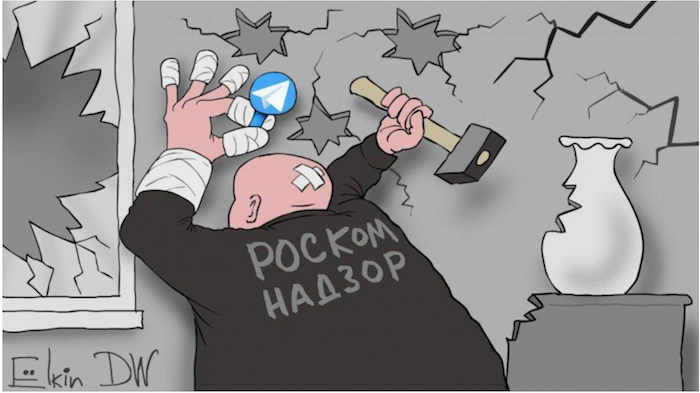