END_OF_DOCUMENT_TOKEN_TO_BE_REPLACED
Over the years, I suspect I’ve made it well known what I find most important in my Elder Scrolls Online gameplay. I enjoy the environments and the quest storylines. I play most of the game solo with very little interaction with any other players. It’s not that I don’t like other players; it’s just that when I started playing ESO, the main storylines in the game where not very group friendly, so that kind of gameplay is what I expected and enjoyed. Of course, that means my primary focus, when playing through the Summerset Chapter for ESO, was story and single-player gameplay.

There are many things added with Summerset that aren’t single-player focused, like the new Cloudrest trial and the Abyssal Geysers, but I’d hardly call myself an expert in those areas. But we solo players do have many things to look forward to in Summerset besides the story quests, like jewelry crafting, a new skill line, and daily login rewards.

For today, I would like to focus on the main reason I play ESO: the story. I’m not going to spoil any major plot points as I describe my playthrough, obviously, but I would like to make mention of key players and things to watch for as you play through the newest chapter.

The land of the High Elves

The tutorial for a brand-new player isn’t live on the public test server yet, which was a little disappointing because I felt as if I were being thrust into the middle of the story without having seen the first chapter. That said, I played through Clockwork City in Vvardenfell and the prologue on mainland Tamriel, which seemed to set up both the antagonists and narrative setting for Summerset for players who are not new to the game.

When I first loaded into Summerset, I was sitting on a path just outside Shimmerene. The landscape is very pretty, as are almost all of Elder Scrolls Online‘s settings. The architecture leans heavily on Roman and Renaissance designs. Although I would classify it as a classic high fantasy design, it’s not like the Elves that you might find in Lord of the Rings. The white columns and arched roofs actually remind me more of Tolkien’s Gondor if anything.

By far, my favorite area is Artaeum. There is no place like it in all of ESO. It’s really hard to describe: It appears to be an island between worlds. The skies – which are its best features – seem to project both the night and day at the same time. There is one sun that burns bright and multiple minor stars all floating in the sky at the same time. But you can also see a moon and clouds. It’s really a juxtaposition of evening and dawn. I could stay there the whole game. In fact, I kind of wanted to, but the quest forced me to leave. Thankfully, I could visit any time I liked. 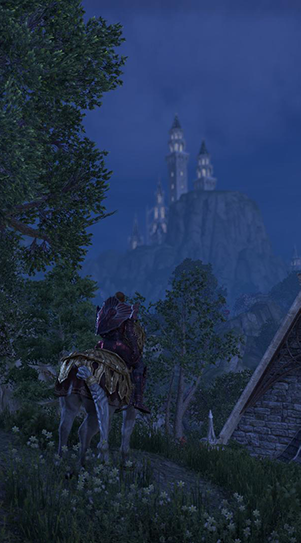 To avoid spoilers, I cannot report past the first major story arc, and I will get into a couple of plot points to whet your appetite. But first I wanted to talk about the least interesting part of Summerset storytelling: the mechanics.

I don’t expect any of the bosses or mini-bosses in the case of the first questline to be highly difficult. If I wanted that, there are many beasts in dungeons, trials, and many other random places on the Tamriel map to challenge my combat skills.

However, there really aren’t any puzzles either. I’ll give you an example early on: Raz, the Khajiit you meet right at the beginning of the questline, sends you into a temple that is guarded by an Altmer knight. He says that he’s going to create a distraction so that you can get in. There are no fewer than three opportunities to introduce some interesting and diverse mechanics in that scene. First, there could have been a better trigger to the guard talking to Raz than the Khajiit literally just walking up and saying, “This one owes you some money that he’d like to pay.” Second, you literally walk through the front door — no lockpicking or anything. Lastly, when you’re inside the building, I expected there to be some sort of trespassing mechanic, but there was nothing like that, either.

Instead of some outside-the-box way of telling the story as we have seen in the last few DLCs and the Morrowind chapter, we simply stick to the basic storytelling convention of exposition told to us by a static talking head.

A great start to a story

At first, I was put off by the simple premise of three Daedric Princes interested in finding and concurring the hidden island of Artaeum, but then I found out that it was Clavicus Vile, Mephala, and Nocturnal. These three Daedric princes aren’t known for their desire to rule over Nirn. Also, most Daedric Princes like to work alone. Why are they working together? Are they actually working together? And since these Princes are “benevolent” as a general rule, why are they doing something that appears to be evil?

I don’t have the answer to these questions, yet, but they do make for an interesting story and one that I want to continue to play.

I was also impressed with the voice acting in the main storyline. I think I caught one line or two that seemed to be read by a member of ESO staff, but rest were great. Many times I’m able to catch when a development team uses the same actor multiple times. I’m looking at you, Steve Blum. But this time it was more difficult to tell when or if ESO used a the same actor for a different character.

The bottomline so far is that if you like the Elder Scrolls Online stories, then you will like Summerset. However, if you’re looking for something completely new with this new chapter, then you might more than disappointed. Based on what I said, are you interested in Summerset? Are there any questions about the story that I missed? Let me know your questions below, and I will do my best to answer them. 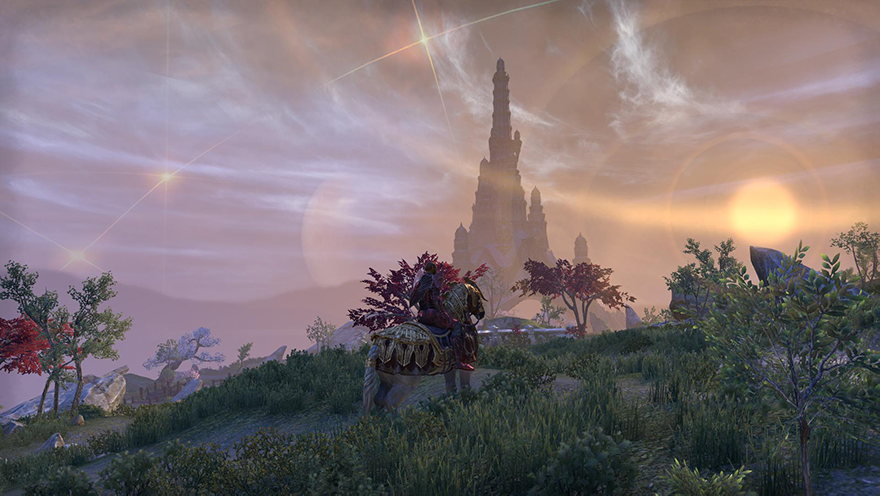 So besides the story Larry what are the other things you said were added for the solo player?

“However, if you’re looking for something completely new with this new chapter, then you might more than disappointed.”

Pretty zone, nice story. Even zeni didn’t pretend there was anything else attached.

Funny thing is if blizzard released this kind of expansion the list of hate posts would break mop records. But because people who still play eso accept the pedestrian gameplay for the sake of story, this will be lauded as a fantastic addition to the game regardless of near 0 replayability.

Of course because Blizzard has a younger overall (and somewhat) immature community. As well as WoW has a different appeal. Its focus is treadmill as fast as you can to get to max to run dungeons and raids over and over. Don’t get me wrong, it is fun … Legion was by far their best expansion to date for me.

ESO on the otherhand feels like it was built for exploration and adventuring first, and dugeons and trials were added later. The whole One Tamriel go-anywhere-do-anything, focus on complex crafting, build diversity, housing, and story driven questing.

Its the closest thing we have to a virtual world since Everquest and Vanguard.

“But we solo players do have many things to look forward to in Summerset besides the story quests, like jewelry crafting, a new skill line, and daily login rewards.”

I play for the story as well. Probably my favourite aspect of this game

I wouldn’t exactly call any daedric prince “benevolent.” They’re all pretty much a bunch of bastards, it’s just that some of them are less obvious about it.

Eh. In the lore, the Daera never took part in the creation of the world, so they’re fully alien to it– their moral axes are completely separate to the point that calling them good or evil is just wrong because good and evil aren’t things they can relate to.

A wonderful game, and forgive me Larry for not reading your piece but although I’m eligible for the beta I have resisted the temptation (thus far!) as these days I prefer to discover everything about new content for myself with a permanent and regular character.

I have Summerset pre-ordered for both my accounts, including the physical collectors edition on one of them, and can’t wait!

Best Western MMO on the market.

Best Western MMO on the market.

As an all-round experience I would have to say it is.

Are there even any other western mmo’s? I mean born and bread like ESO? Not a port.