“Fortnite is now the largest free-to-play console game of all time, in revenue generated and monthly active users,” SuperData has declared in its monthly revenue report for the gaming industry for March 2018. The game sits at the tippy-top of the console listing and has now breezed past both PUBG and World of Warcraft to sit at #5 on PC.

“Fortnite had quite a March. The game has overtaken the previous ‘king of battle royale,’ PUBG, in terms of revenue generated and monthly active users across all platforms. It also hit the #1 spot by revenue on iOS in the United States in its launch month, and has the highest conversion rate of any free-to-play PC game in March. […] There’s no other way to say it: the game is a phenomenon. Fortnite generated $223 million across all platforms (console, PC, Mobile) in March, up a whopping 73% from February.”

Hearthstone’s re-entry to the PC side has bumped Far Cry 5 out of the top 10 (though Far Cry 5 on console is at #2). Destiny 2 is now nowhere to be found, Monster Hunter World has sunk to #10 on the console side, and Sea of Thieves debuted at #7 for console revenue. Don’t get too excited about Sea of Thieves, though; the analytics firm says almost half of the game’s two million or so monthly active users were playing the free trial.

We don’t cover Dungeon Fighter Online much as it’s a very small MMORPG here in the west, but in the east, it’s still huge. And it has a great month too.

“Dungeon Fighter Online has generated the highest revenue of any Free-to-Play PC game in March on the back of their third anniversary celebration and a limited event that challenged players to level up new characters for special items.” 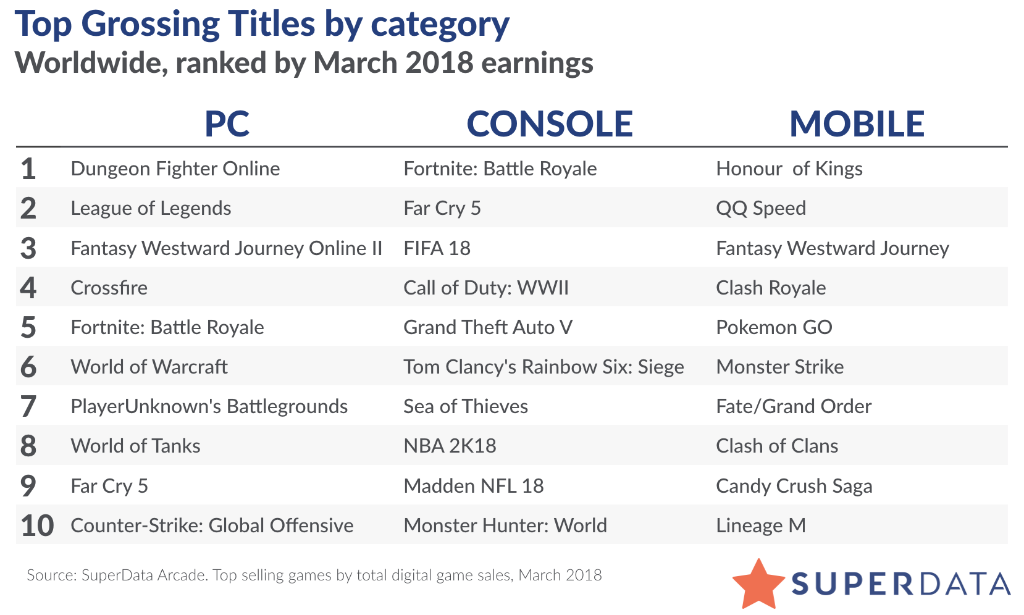 I don’t understand why Far Cry is on the list. Far Cry games are like CoD games – they come and go and are forgotten. Remember when Far Cry 3 was the shit? I remember. And now absolutely nobody talks about it anymore.

All the other games are online and that’s their main selling point. Far Cry 5 will be forgotten completely in a year, but the rest of the listed games will remain.

It’s pretty much at the point where the only thing that’ll kill Fortnite is Epic themselves.

Which they very well could do if they make too many stupid decisions.

Man…this reeks of H1Z1/Just Survive all over again. The survival part of the game gets seemingly abandoned to throw all support behind the popular PvP half of the game. I get it and all, it’s the smart thing to do from the business side of things.

But damnit, I have literally zero interest in these battle royal games. I just want to see the PvE half of the game get finished so I can give it a spin, looks mildly amusing but nowhere near enough to drop cash on.

Good on Epic though, they’re fucking killing it while the game has its time in the sun.

I play it. Wait for another sale where you can get the basic version for $20. Just my opinion of course, but I recommend the PvE game. My friends and I are having a lot of fun.

I play the Battle Royale occasionally as well. And did buy in on the second Season. However, I’m so bad I wasn’t going to waste my money again :)

Save the World has been SLOWLY improving and getting better. They’ve actually made some great changes to it that were giant “why the hell would you do this in the first place” things, i.e. running costing Energy when Energy is required for abilities… and they are going to have stat rerolls and stuff coming in May, but ofc they’ve still got a lot of convoluted systems and progression still feels pretty bleh.

Not So Massively: Magic the Gathering Arena is great, but it can’t replace Magic Legends

The Daily Grind: What part of your MMO’s endgame do you participate in?

Not So Massively: Magic the Gathering Arena is great, but it...

Indie MMO TitanReach’s free-to-play access is live — for a limited...

Ashes of Creation talks about its next testing steps and previews...