Sometimes I am just so proud of our One Shots crowd here at Massively OP. I keep coming up with ludicrous screenshot challenges and you all continue to rise to the occasion. Even when I ask for spiders. Giant spiders.

We got ever so many.

Vincent leads the arachnid parade with this pic from Final Fantasy XIV: “I give you Arachne Eve, the first boss in the Weeping City (aka ‘Wiping City’) raid. My alliance was not amused I was taking screenshots mid-battle — especially as I was the healer. But y’know… priorities.”

At least he has learned the important lesson that One Shots is more important than anything else in your gaming life. You should all be this devoted. 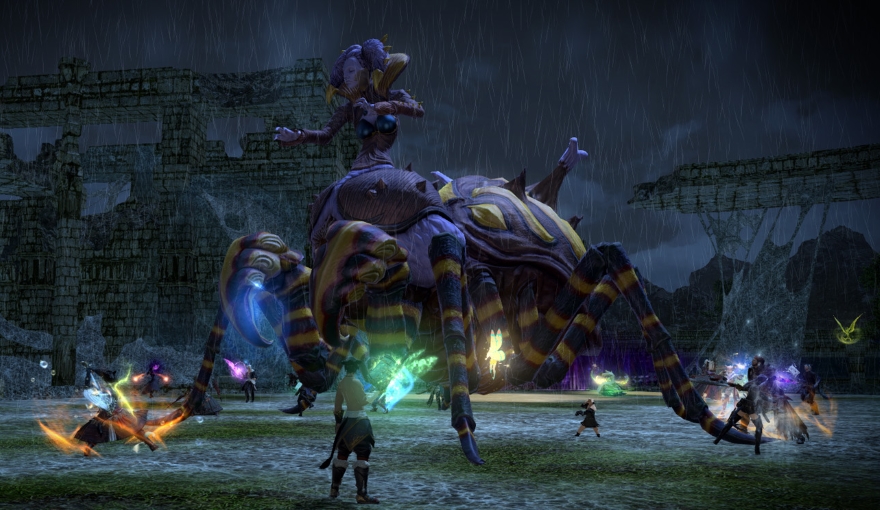 I don’t think a lot of you really had to stretch to find some oversized bugs for this column. Ryuen knew right where to go: “This challenge makes me want to reinstall EverQuest 2 just to go grab some Terrorantula screenshots, now that was a big spider. And there we go.” 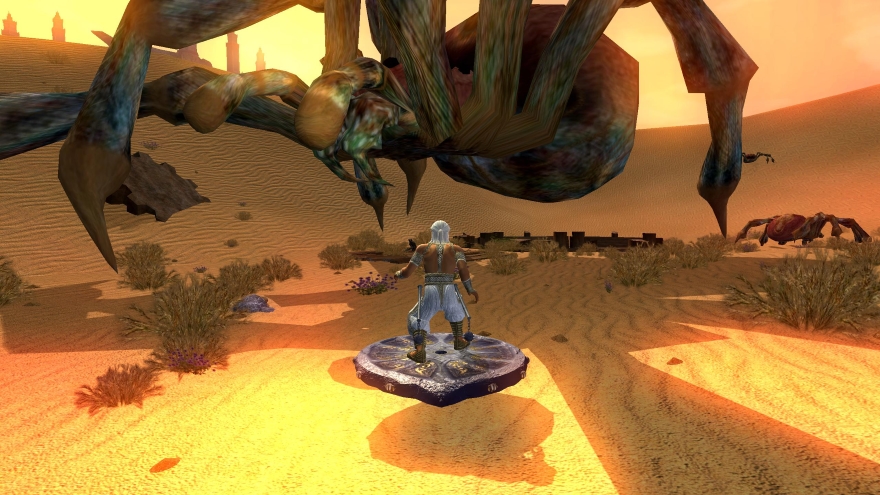 Now I kind of want to see a battle royale between giant MMO spiders. Don’t you?

“Spiders! I thought I hated them before, but after playing MMOs, I think I took it to a new level,” said Rafael. “This is Dokumo. She is a spider in Blade and Soul. Now, there is a school of thought that says ‘if you leave spiders alone, they will leave you alone.’ BS! If you leave Dokumo alone, she will eat you alive.” 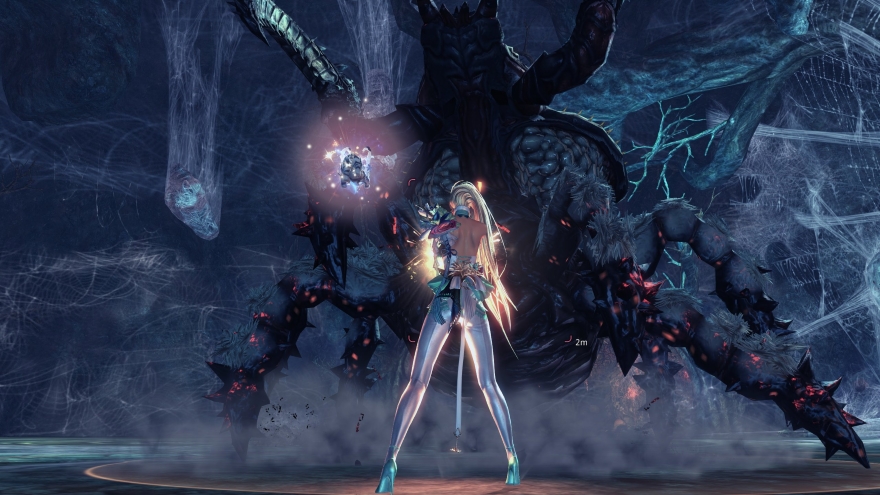 GamingSF had the same idea that I had, which was to head into RIFT and visit an infamous low-level spider boss that’s known for sending groups into a frenzy of terror.

“Spider boss fight from a pug on RIFT Prime this evening,” he wrote. “One mean big spider there! Plus it fits the previous ugly zone theme — as this section of the dungeon is dark/dingy spider-web filled caves!” 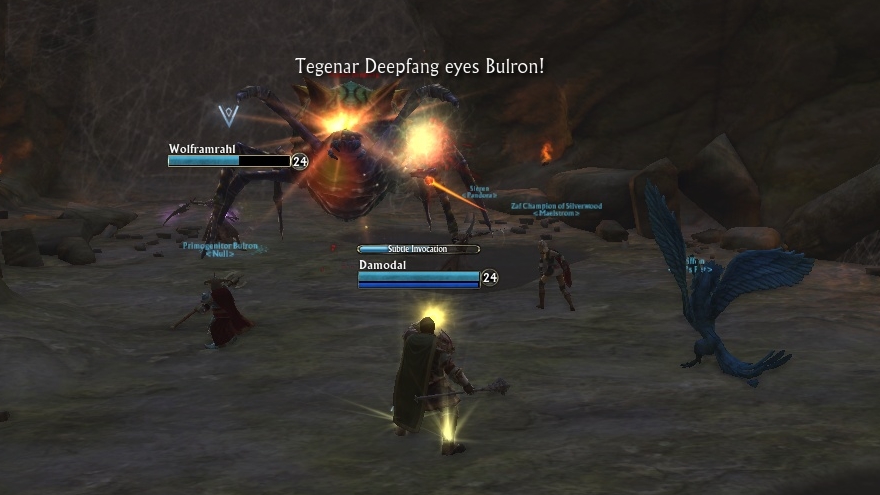 “Here is a giant spider that is under the control of a Turbine devoper in Rivendell,” shared Zulika. “During the Lord of the Rings Online beta, on the night of 1/14/2007 specifically, the devs spawned some big baddies and also came in as baddies themselves, first in Bree and then in Rivendell to test how the servers would react to a crapload of peeps converging on the same area and spewing spells/actions. Good times!” 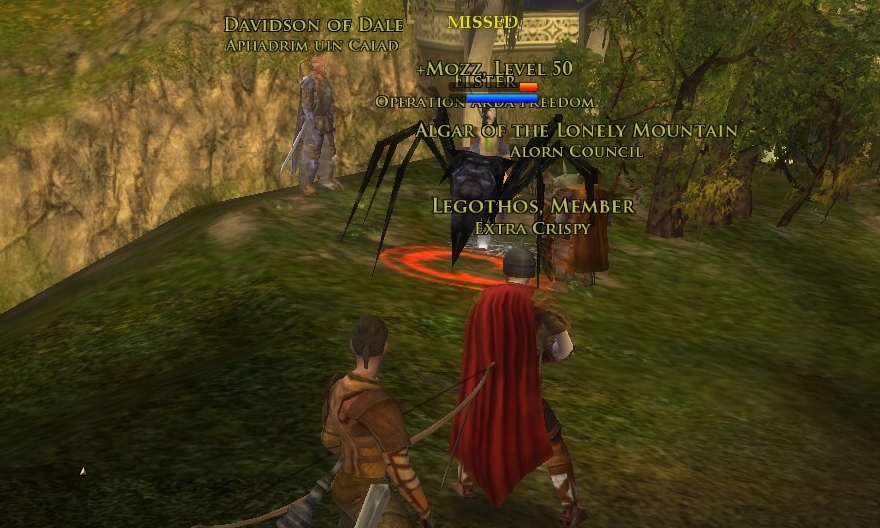 What was your first MMO love? Maybe it wasn’t the first game you played, but the one that really made you fall head over heels for online roleplaying games. Share a picture from that for this week’s challenge and let us know why it hooked you so hard!

Ah… well, you see, what had happened… Lol!

Due what is known as a catastrophic hard drive failure (that’s the industry term for when the platters are actually damaged), I lost 250 gigs worth of my early MMO pics, movies, TV shows. Heartbreaking, to be honest.

BUT, I can simulate, what I might have been able to post in response to this weeks challenge.

So, thanks for the shout out, Justin. I do enjoy killing giant spiders from behind the safety of a monitor and keyboard.

Here is what my first MMOs screen cap would probably look like.

Y’know, I should’ve posted that myself. I don’t think Nemesis MUD is still around anymore, though.

WoW was really the first MMO I ever owned (shortly after launch). I’d watched a friend play EverQuest previously, but it baffled me completely. I’d grown up with all the single-player games like Dark Forces, Mechwarrior, and Daggerfall.

But 2004 was like 8 computers ago, and I’ve no screenshots left from then.

So instead here’s a screenshot from a brand new game. I stumbled across it whilst watching one of my favourite Twitch streamers, because he’s very laid back, and has been demonstrating Escape From Tarkov, which I’ve been very much interested in for more than a year.

The other game he’s been at is called Ring of Elysium. It sounds like a fantasy title, but in reality is a straight-up PUBG clone. I would say “rip-off”, but it seems to be chiefly developed by Tencent, which is the producer of the PUBG mobile version, with development help and at least tacit approval from none other than Bluehole (original PUBG’s studio). It’s all a bit nebulous, but some rumours suggest it will ultimately replace PUBG entirely. Additionally, the game is presently only “officially” available in Thailand, although one can access the 3rd-party launcher from Garena, and change your region to Thailand, then you’ll have access to Ring of Elysium. There’s nothing illegal about it at all. Once in the game, change the language to English, and you’ll all set.

It’s in testing, and so it’s free. It already looks better than PUBG, and the optimisation is top-notch, comparatively. The only real drawback for those in the States would be the latency (high ping), due to the Thai location. I’m much closer and so it’s no trouble, but those on the American west coast seemingly have little difficulty. To be clear, I’m fairly awful at these sort of games, but have been having a good time. The character customisation has sliders and all those nice touches as well.

Sorry to go on about it all, but since I don’t have an old screen shot from WoW, I thought I’d share one from RoE instead. You can see I’m approaching some sort of lovely aquatic-themed park. I managed one more kill before some bloke with a scoped Mosin–Nagant two-shotted me from atop one of the towers there.

I am in! I have been having a blast in Fortnite recently. Just from the pic, this looks similar but with better graphics. Fornite is an amusement park of sorts.

As for lag? Hmm. Well, I’ve been wanting to use a service like No Ping for some time to see if it really works. They have free trials. So, this might be a good test case. Besides, I for once will be on the other end of the ping discussions. Lol. Usually, my ping is very good on just about everything. Texas is a good gamer state as it is right in the middle of things and close to server farms for several studios.

Let me know how you are getting along with it. It is certainly much more PUBG than Fortnite in terms of aesthetics, but does split the difference a bit in the feel of the gunplay. I quite like it. ;)

Sadly, all my City of Heroes screenshots are currently in storage until I can bring the old gaming PC back up. But I could also argue that Guild Wars 2 was what cemented me in the MMORPG universe for good, and I certainly have screenshots from there! Here my namesake sylvari celebrates his fifth birthday while my newly re-built elementalist, Mirka, has a sad.

Also included today are a pair of screenshots of my Champions Online main, the implacable Rose Wonder, one in her original ’40s Nazi punching outfit and her now more modern look. The old four color look won third place in Thursday’s ‘Origins’ costume contest held by the Cryptic devs! I’m still kinda giddy at that.

The Secret World was my first and only true MMO love. The story and lore was so compelling it made me forget I was still just killing ten rats and fetching twenty bear rumps. It was deep and challenging to a degree that I was still learning its nuances after years of playing. Last but not least, it had the friendliest, most mature player community ever, period.

Unfortunately I wasn’t into the whole screenshot thing during my peak years so I got nothing original, but here’s a silly shot I took in Legends today.

I took this one right before shutdown. I am standing in front of my villa in awesomely mismatched armor that would have drove my patron crazy.

On the far right my skills are displayed. There were no classes in AC. You could train and specialize in whatever skills you wanted – building your own custom class. This is one of the reasons I loved AC.

Ah my born on date….and great # of deaths.

My first MMO love, way back in 2005, was World of Warcraft. I had no idea how to play, it took me almost a month to understand ho to talk to other players, but the memories I have of those first days are truly awesome, so WoW will forever have a special place in my gamer’s heart :)

My first MMO, and first MMO love it’s probably fair to say, was Everquest. I have many memories of my time there, but sadly I don’t have many good screenshots from that time still that aren’t just character selfies. The image below was taken ca. early 2003 and is one of the better ones I still have and it represents the crowning achievement of the guild I was in there, the slaying of the First Born dragon Klandicar. It was far from being new or even necessarily notable content at the time, but it was quite an achievement for our little guild that was only just barely able to field a full raid force of 24 and was still only just doing the first areas of Temple of Veeshan. Sadly the guild imploded only a few weeks after this achievement and most ended up leaving the guild or (myself included) ended up leaving the game entirely.

Excuse me, do you have a character named Katriana in SWTOR, Darth Malgus server?

No, none of my characters in SWTOR are named Katriana. Not even sure which server they’re on now, LOL. Haven’t played in long time.

It was the pigtails, of course. <3

@Justin, thanks for the spotlight on my screenshot. Sadly, my first MMO love was LotRO and you couldn’t pay me enough money to download and re-install that game just to grab some screenshots :) Looking forward to seeing what others have submitted this week…

Suramar. The look & feel of it plus the questing there made me fall in love with WoW all over again. It’s quickly becoming one of my favorite cities in any MMO. It’s not only gorgeous but it also feels “lived-in”.

(sorry for replying to myself, couldn’t add screenshots through editing)