Nexon posted a strong first quarter in 2018, with its earnings call reporting that the game publisher raked in $827M in revenue (a 21% year-over-year increase). The company did most of its business on PC (84%), although mobile (16%) continues to be a significant factor in its success.

Most of Nexon’s focus continues to remain in the east, as both China (67%) and Korea (22%) pull in a vast majority of its earnings. The company singled out the the performance of Dungeon and Fighter, MapleStory, and Durango: Wild Lands for praise.

Coming down the pipeline in North America this year and beyond is MapleStory 2, Durango, MapleStory M, and Final Fantasy XI Mobile. Speaking of the mobile version of FFXI, purported screens were leaked on Reddit that showed this still-beautiful game in action. 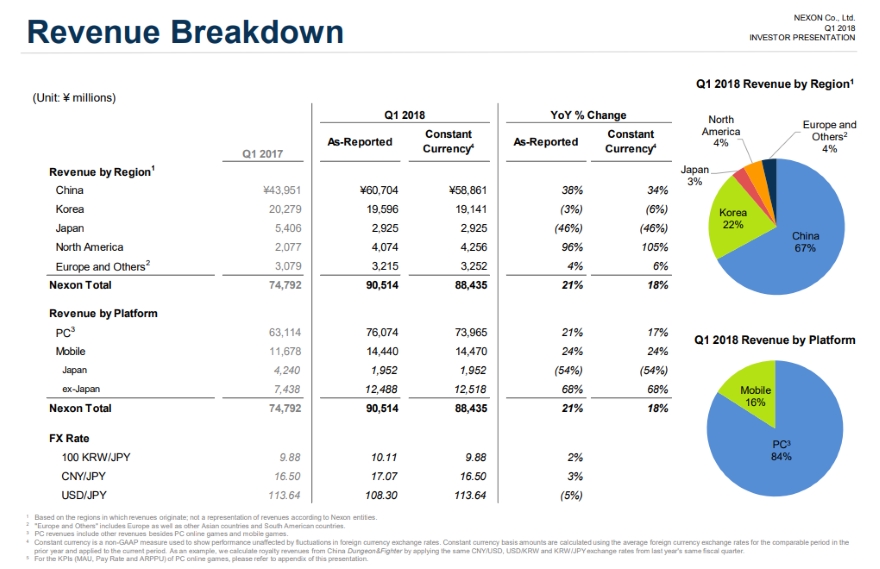 Call me a snowflake, but I could never get beyond the UI. If they can streamline that for mobile I’m all in.

FFXI was an awesome and fun MMO for a long time, it’d be great to see it make a healthy port into mobile :)

Looks good for a mobile game. Though I’m weary cause it’s SE and their track record for mobile games is spotty at best.

While this doesn’t apply here, I also avoid purchasing anything mobile from SE because they often use (or used) always-online DRM for single-player offline games. After all, as often as not when I’m outside my home I don’t have internet available, and if I’m at home I will be playing on the PC instead of a mobile device (even if my mobile device is a 10″ tablet).

that’s nintendo not square. I have FF tactics, FF3, som and few more and they run fine without internet.

I hope those are legit. Looks much better then original.

I am a little confused by them because the last pucs we got from the game were chibi.

To be fair the orignal is 16 years old.