Why do you play MMORPGs? What keeps you questing through these ever-growing worlds? I think a lot of us might answer like Zyrusticae in Blade and Soul here, as we enjoy inhabiting and exploring virtual fantasy worlds.

“See, this is the sort of thing I play MMORPGs for,” Zyrusticae writes. “That sense of ‘place.’ Being somewhere else, even if it’s only behind a computer screen. Old shots, yes, but still some of my favorites just for that. It’s a very pleasant feeling, really.”

Will you find your sense of place in the following player screenshots? Let’s find out! 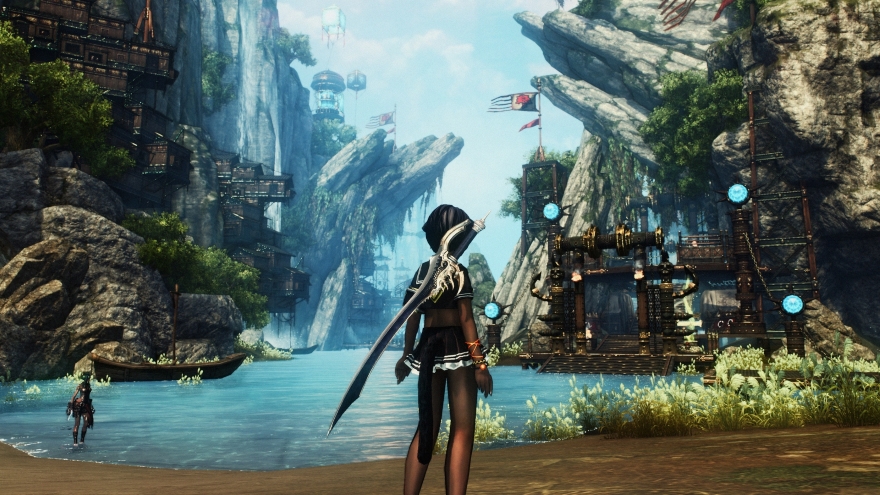 Namtubb is getting taking a break in Warframe to get in some puppy dog time: “I think this pic might elicit some emotions from people, emotions like, ‘Aww what a cute space puppy!’ or ‘Someone call the space police, someone’s choking a space puppy!’ What we’re actually seeing is my first ever space puppy, Khana, and me petting her.” 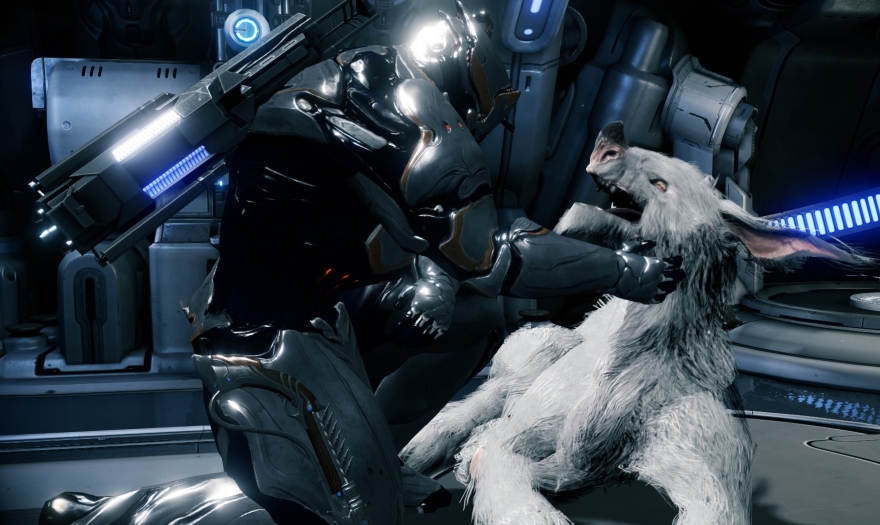 “I’ve always had a love/hate relationship with the vista mechanic in Guild Wars 2,” said Rees Racer. “I’ve personally backpacked to many different parts of the world, and enjoy finding my own real life spots to take in a rare sight. But some of those jumping puzzles in the game are harder than actual trekking and climbing about some obscure island in the Gulf of Thailand. Sometimes I’ll find myself in the game with no official vista, but instead qualifies as mirror of my own proclivities to explore. It merely satisfies my wanderlust temporarily… when I can’t quite literally jump on the next flight to some other remote destination on planet Earth.” 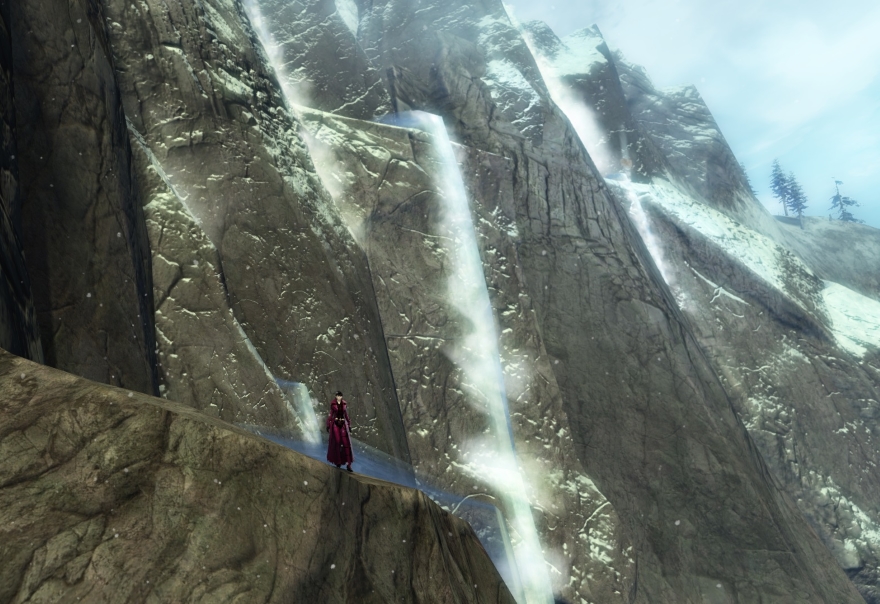 “Final Fantasy XI was the first MMO I would say I fell in love with,” sent in Nobleeinherjar. “Until FFXIV, it was the only MMO where an in-game place felt like home. I was a proud citizen of Bastok. Before there were a dozen different ways to teleport around Vana’diel like there are today, I would miss Bastok if I was away for a long time on whatever adventure my character was undertaking. Every time I’d zone into Gustaberg, its arid beauty and the sound of those xylophones starting to play let me know I was almost home.” 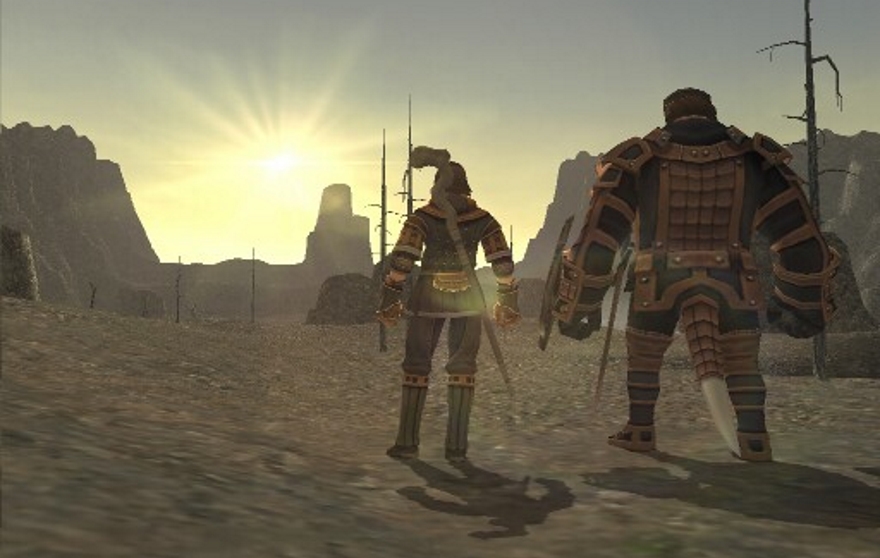 My challenge to put readers in touch with their feelings sent them to scary and challenging headspaces. Don’t worry, we’ll steer well clear of feelings for a while, unless those feelings are chest bumps and explosions!

Vincent felt up this FFXIV pic: “Right, this week’s screenshot challenge is all about feelings, eh? This is the first time an MMORPG got me to feel something about an NPC. His wit, his charm… when we were at our lowest, he opened his doors and took us in. And he didn’t hesitate for a second to raise his shield in our defense and sacrifice his life for ours. The true Warrior of Light.” 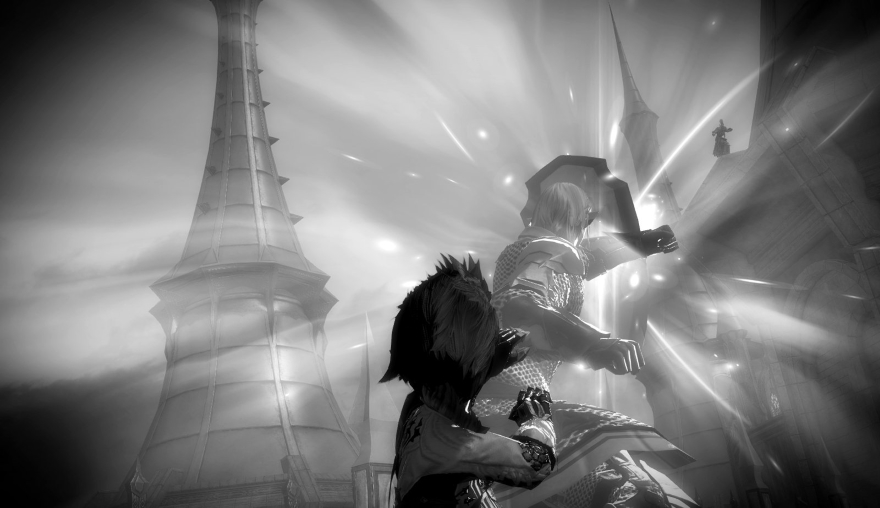 Let us imagine that there was an MMORPG screenshot contest with a juicy prize, but you could only submit one picture as your entry. This week’s screenshot challenge is to find your best-of-the-best and show it off. What would be your winning entry?

I agree. That is the #1 reason I play mmorpgs. It’s not for the innovative story telling or quests. For that, I would play Witcher, or Arkham City, or something like that. But the mmorpgs that I really get drawn to have a world art design that makes me feel like I’m in a cool and different world with a lot of other people. Worlds with awesome graphics, but that are realistic don’t attract me as much, because I can go outside and see trees with awesome graphics. But to be in a world with other people that I would only maybe see in an anime, or read in a book, is what makes me continue to explore these worlds.

It’s cruel to have to pick just one. For whatever reason, this is a favorite of mine…

Just one? Really? Just the one?

Boy, you really know what to say to induce absolute decision-making paralysis in me, don’t you?

Well, after much deliberation, I just realized that it had to be this one. There is no other shot that gets my attention as much as this one does. The absurdly saturated, bright blue color palette in contrast with the autumn colors… yes, it does my heart good.

So you want the GOAT (greatest of all time)? Can’t do it. That’s like comparing Michael Jordan to Lebron James. Err… wait. I guess it can be done because anyone who ever saw Michael Jordan play and win six rings knows he is the GOAT.

Here is my GOAT, then (click to enlarge). Although I reserve the right to throw more than one cap in just because I can. You can’t stop me!

But I can’t leave it at that. There is this beauty from BDO.

Oh, yes. I know what you mean.

SWTOR… are you on Darth Malgus?

I was on Harbinger. Not sure where I would be now. I quit playing shortly before the last mergers.

Alas. Though I saw your character.

Oh and this one from SWTOR.

This was so hard to pick one… hours later, looking over 10s of 1000s of screenshots (that’s not an exaggeration) I got it down to a handful of finalists. From which I then had Natalyia pick the one below.

It ended up being a rather recent shot of Hikari in Conan Exiles. We’ve traveled from game to game but this game just has some amazing lighting that I can play around with while… playing around.

Beautiful screenshot! I’ve been really enjoying Conan Exiles a lot lately. I agree, the game does have some really fantastic lighting… except when it comes to blonde hair.

I would love for a mod at least to make my character’s hair not look grey in most lighting.

A moment of unusual affection:

“…find your best-of-the-best and show it off.”

TERA has been celebrating it’s 6th anniversary this month. I now there are readers keen to criticise the game for some questionable stylistic choices (and I don’t have any Elin characters), but it certainly ranks near the top if you fancy action-combat in your MMO.

The Gunner class was introduced about 3 years back, and has been a favourite of mine. I like this shot purely for its gorgeous aesthetics. The composition is just right. Her not-entirely-impractical-outfit complements the location nicely, and her hair brings out the blue colour accents in her armour and enormous gun. I also love TERA’s various subtle idle-animations, as she appears to be brushing of a bit of sand in order to maintain her pristine appearance.

Or maybe her spine is broken from carrying that ridiculous gun, heh.

I don’t know if it’s actually my best but I’ve always been partial to this one.

My friend and I were playing with /gpose a while back (as we often do) and got the idea to take screenshots with the theme of looking like a movie poster. This sort of melancholic looking scene is what I ended up with and is one of my favorites.

Yep! Pigtails already judged this to be the winner! <3

This is fantastic, beautiful shot!

Very nice shot. The Heavensward areas were by far my favorite of the game so far including Stormblood.

Just one? It would have to be this ESO screenshot.

But I like this one too. A simple tree, just outside the Dark Brotherhood.