END_OF_DOCUMENT_TOKEN_TO_BE_REPLACED
Today is the formal launch day for Summerset! My goal during the PC early access was to finish the main storyline, and I’m happy to say that I did it and some of the side quests as well. And I was also able to do a bit of exploring around the island just to see what was there. As an Elder Scrolls Online fan, I have to say that I’m satisfied with what ZeniMax delivered. If you are a fan of the game and really enjoy what the team has given so far in the game, then you will also like the Summerset chapter.

I strongly believe that ZeniMax over-delivered with Morrowind, so when making a direct comparison between the two different chapters, I will, unfortunately, have to admit that Morrowind was the stronger chapter. But that’s not to say that Summerset was a bad expansion to the game. In fact, it’s quite the opposite. There are some very strong characters, glorious set pieces, and fun Easter eggs.

As I talk about the story of the next chapter, it will be impossible not to talk about spoilers, but I will keep them as light and vague as I can. And I promise that anything that I reveal is not a major plot point. With that in mind, let’s talk about this story!

The characters make this story

Most of the characters that you meet who have the greatest impact on the story you meet at the very beginning of the questline. If you play through the tutorial, you will run into Oriandra, a junior member of the Psijic Order and guide through K’tora’s mind trap. Razum-dar appears again as you step foot on the main island of Summerset. He’s the Khajiit guide through Khenarthi’s Roost and most of the Aldmeri main story, if you’ve played through the Dominion quests. Valsirenn appears fairly quickly in the story. She is also a Psijic and acts a lot like an anchor to the player story. Although she’s not in every part of the story, the player comes back to her time and again. You could say that she’s the exposition queen. Iachesis might be a name you’re familiar with because he was mentioned in several Elder Scrolls games. At the time of ESO, he’s the Ritemaster of the Psijic Order.

As usual, some of the best characters are those who aren’t 100% on your side of the story. I was very impressed with two characters who have dubious intentions. Mepahala’s Earl Leythen plays a wonderful role in the plotline. When I say that, understand that a well-made character rarely does what you expect. Leythen falls into this category, making some of the dialogue choices very difficult. I will say no more about him.

Besides the characters already mentioned, Summerset pulls characters from other parts of the game. And if you’ve followed their mentions throughout the game, then meeting them again here will change your perspective. One that I would like to mention is Darien Gautier because his character arc in Summerset is touching. If you know the character from the Covenant story, your meeting with him and his ultimate fate in the Summerset will probably hit you in the feels — it did for me.

The most gorgeous setting

It’s no surprise that we get to visit Artaeum in Summerset. Recall that we have been to some spectacular places in our adventures through ESO; before Summerset’s release, I would have said that Clockwork City was the most stunning. But I was also a fan of Coldharbor and Black Marsh, too. Morrowind was, of course, alien and beautiful.

However, Artaeum itself is just shocking. The island is very small, which is unfortunate, and the explorable area is even smaller, which is even more unfortunate. Although there are a couple of side quests on the island, there really isn’t enough to explore for someone who’s largely there to take in the scenery.

I think the most disappointing part of the whole expansion is that Summerset suffers from the same curse as most of the game: The explorable areas tend to directly serve the questlines and nothing more. For instance, it’s great that you can see the Crystal Tower from a distance, but outside of the questline that deals directly with the tower, there is no way to visit it. If you take a look at the map, you can see that a large chunk of land has been cut out of the Summerset map to make room for the tower and its surrounding area, but from what I can tell, you can visit it all of one time, and even then you see only the inside. It’s not the end of the world, no, but it does put a damper on world immersion. 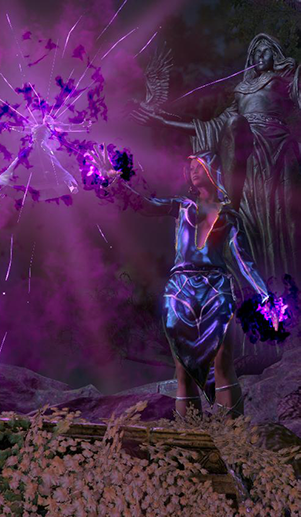 There are two things that I would like to mention that really don’t fit neatly into their own categories: the mechanics of gameplay and the new character models.

The existing character models or derivatives of the existing models, like all the characters that I’ve mentioned so far, are fine, although I do take small issue with Leythen being an Altmer with black hair. I found the models of Mephala and Nocturnal to be a bit lacking. If you see the stills of Mehpala, she looks great. However, I am thinking maybe she was overloaded with detail because when she moves, she seems very robotic and unnatural — even though she is a ten-foot-tall spider-lady. And as I’m sure a lot of players will appreciate the deep-V in Nocturnal’s robes, the character’s skin appears very plastic. (And if anyone is wondering, my graphics settings are maxed and capped.)

It’s not that Nocturnal and Mephala look bad; it’s just that they do not appear to be as polished as the rest of the game. They seem to project a more cartoony quality in a game that usually skirts the edge of ultra-realistic.

Lastly, I believe that the story is wonderful with some extremely touching moments filled with real emotion, but at times, I get the impression that Summerset has forgotten it’s a game. There have to be things for the player to do and puzzles to solve. My most difficult time was defeating the first boss. The mechanics were not too hard; I was just underpowered because I made a new character for the playthrough. There were also no puzzles or non-combat ways to progress the story.

The story was rich, but if you’re looking for interesting mechanics akin to what we saw in the Thieves Guild and Morrowind, then you’re likely going to be disappointed.

Overall, Summerset was enjoyable. I will definitely play through the main storyline again on a different character, but I’ll go in knowing that it’s more of the same. And that’s not really a bad thing, as ESO is well-loved. It’s just that Summerset isn’t Morrowind.

I’ve just recently gotten into ESO as my secondary MMO after GW2. I have a ton of content ahead of me and it will be a long time before I get to Summerset as I chose to do the entire story instead of skipping ahead. I’m having a blast so far.

ESO and GW2 have a lot of things in common while still be very different as well. I feel like I’m getting a new experience than in my main game but they share a lot of modern MMO features so that I’m not constantly having to wish a feature from GW2 was in the game like I do with every other MMO I’ve tried.

Well, obviously Summerset is smaller than Morrowind and its price is questionable for its content. But… but… somehow i like Summerset much more than Morrowind. Devs did great job at representing Altmer culture and it’s so rich, not just racist morons as people usually see them.

Very good piece. However, in the end I think I prefer Summerset to Morrowind, and I absolutely did not expect that!

Been working my way through the older content, Cadwells Gold, and Orsinium is done (that story reminded of MacBeth a little, I actually felt a little bad for the bad guy at the end, he went from being a one dimensional Megatron character to having a little depth at the end. First villain I’ve felt bad about since the Stormspire zone, and Deshane.)

Getting a little hooked on murder in Dark Brotherhood, even though I suck at it sneaking around in Heavy Armor but when I manage to use that Blade of Woe I’m like a fat kid with cake!

I got into ESO for a bit recently, but the xpac kinda killed my enthusiasm. I know raising the level cap is superficial and all that, but I never feel like my character is any stronger. A whole new xpac and my character won’t really be getting “stronger” unless maybe there’s a new skill that fits in really well or crafted jewelry makes for a major upgrade.

Does this update have the 2hand set bonus change in it?

Yes and it is a glorious wonder to behold.

I keep trying to get into ESO, I got a Dragon Knight at 260 cp so I got a fair bit of time in the game. I just cannot stomach the combat animations. Not sure if anyone else feels that way.

many of them are terrible. I know I posted before about the dual wield heavy attack. That’s an eyesore.

The thing that galls me about the animations is animation canceling. That you have to master a glitch to do top end DPS irks me to no end.

Not just combat, most of the animations seem like alpha quality. Spell effects look worse. All that aside I almost reinstalled until I read this article