Apparently, GDC was good to Funcom, The Bearded Ladies, and Mutant: Year Zero. The teams had originally thought to skip E3 this year, but after the reveal led to even one developer’s mail attendant in Sweden fanning out a bit, it became clear that an appearance at the Expo might be in order (and to maybe not wear developer t-shirts in public).

The Bearded Ladies developers said that they’ve received nothing but positive comments so far, and I can’t say I’ve been able to give them more critical feedback either. Part of that is because my tactical RPG experience is limited to super casual Fire Emblem outings that never end with my finishing the game. Admittedly, I also didn’t have a ton of questions to bring with me this time because the guys were just so open at GDC. It’s probably for the best, though, as I was finally able to get my hands on the game. Spoiler alert: Not only did I fail my mission, but so did almost everyone else! 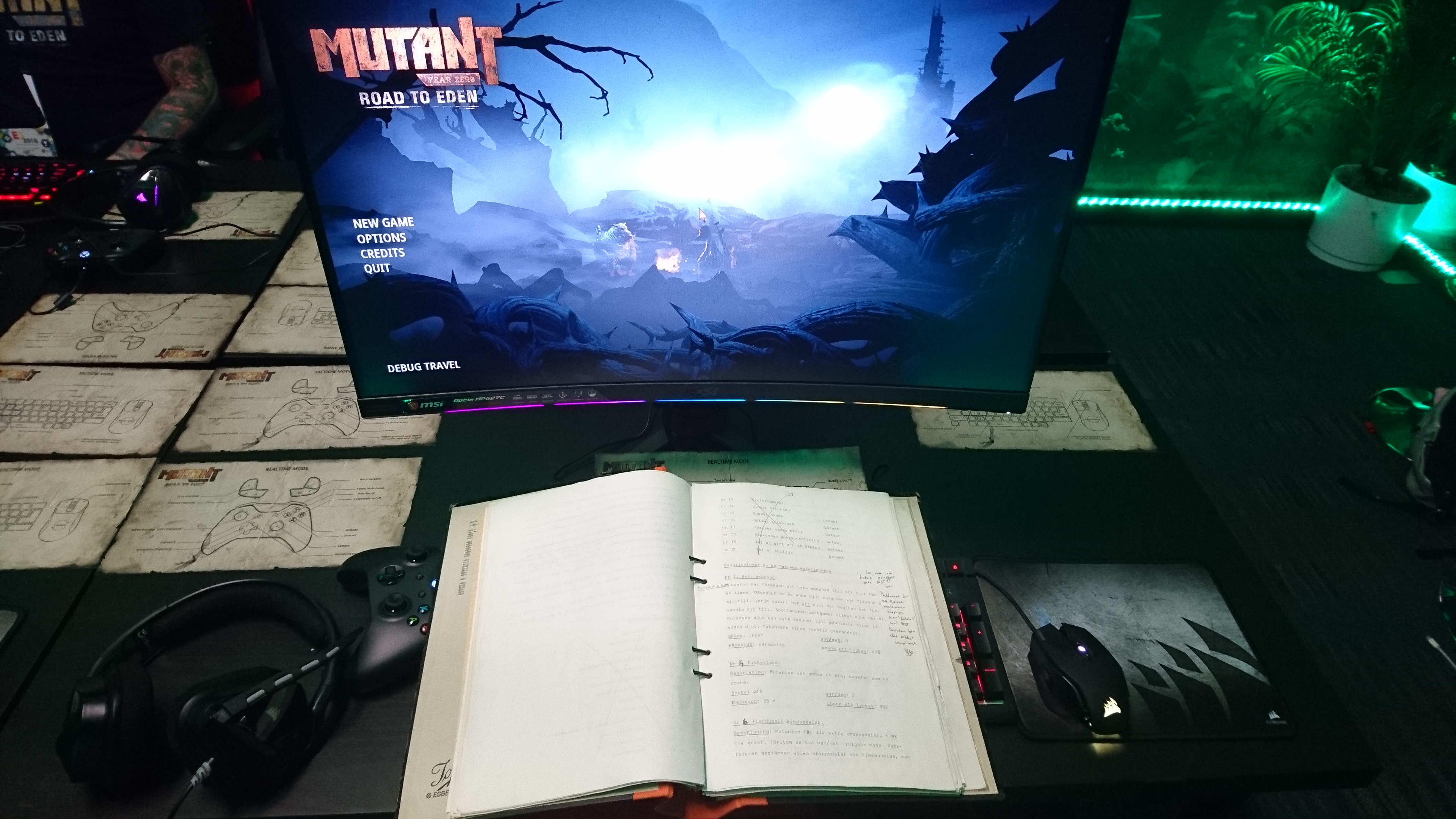 The road to Eden

Bearded Ladies Circus Director (that’s his real title) Haraldur Thormundsson and I had a nice chat before the other press arrived. While he gave the catch-up spiel to the others, he showed off physical evidence of how much trust the team has gotten from Target Games to do right by the IP. Not only did the devs secure permission from original game designer Fredrik Malmberg, but Malmberg also invested in the game. He even lent them the original manuscript for the game, as seen above.

I asked the team what it learned from GDC, and the devs told me they think there’s a big market for tactical games. They mentioned Mario + Rabbids Kingdom Battle being one example, as its simplicity is good for introducing people to the genre, but it’s also lacking depth vs. something like X-COM, where you’re just doing fights back to back, so the devs wanted something more open, more stealthy, to give players more options.

They also learned that people really liked the CGI trailer. The characters really popped, and people latched onto the personalities, especially our feathered friend. Oh, and destructibles, but more on that later.

Monetization is still fair, sticking to buy to play for launch with future paid DLC. Sorry, there’s still absolutely no word on multiplayer beyond its being a possibility as it was discussed very early on but axed. At this point, we’re keeping one eye on it chiefly because of Funcom’s involvement. 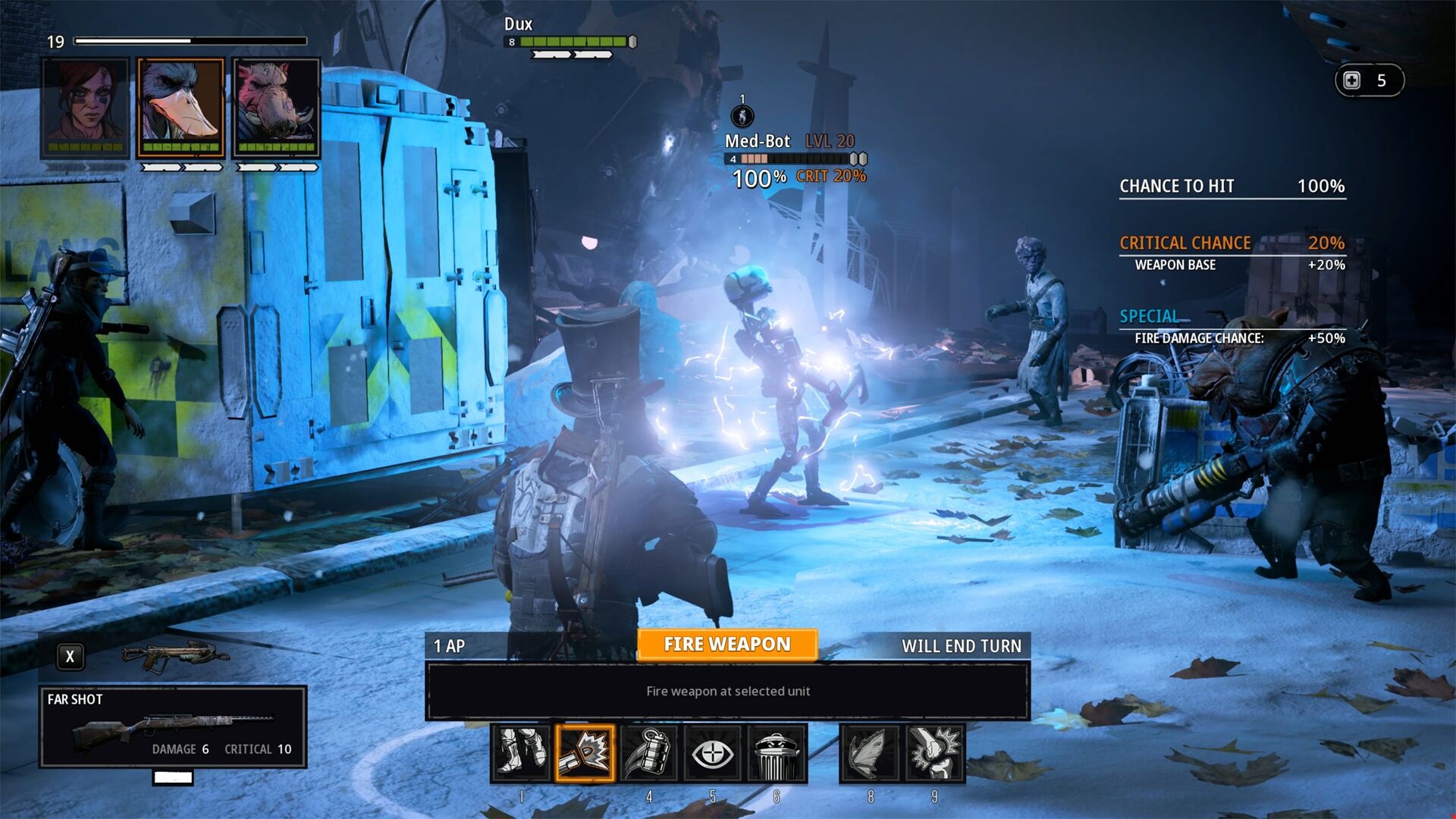 The demo being shown to us was about 25% to 30% into the game. The idea wasn’t (supposedly) to kick our butts but to show us a new area of the game and new ideas. We went from a forest at GDC to a frozen tundra at E3. What looked so easy in the hands of the developers was a challenge to many press in the room with me, perhaps with one exception: the single solitary guy who finished the demo. I was one of the last groups to play on Wednesday, so I was on hand to witness him, the first person to beat the demo.

While I’m used to other press and influencers being less critical to developers when face-to-face with them, the few tactical vets in the room honestly seemed to enjoy the game and had no criticisms of what they experienced. The difficulty mostly seemed in having limited time to, say, learn patrol routes and controls needed to set up ambushes before the turn-based side of the game kicked in. Thormundsson tried to tell us that the demo was only just “playable,” but I didn’t personally encounter any glaring bugs in my playtime (and I’m usually the guy finding them in other demos).

After a brief chat, we were allowed to go out into the game world. Using the flashlight helped our characters move faster, but also meant we’d attract attention faster. That’s bad, as being discovered means the enemy goes first in the turn-based tactical matches. While in our demo winning a fight brought our whole team back to life, Thormundsson reminded me after several embarrassing deaths that there will indeed be a permadeath option. I love the idea, but I learned in Fire Emblem that I just don’t have the time or patience to play that way anymore. That being said, I still enjoyed the playthrough.

It sounded like most of the others in the room rushed out to fight first. I didn’t, since it was obvious from my GDC experience that exploring matters. People who didn’t find the extra med-kits near an abandoned building were at a disadvantage, though even with one, I barely lost the encounter. 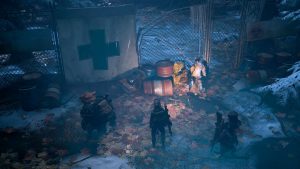 The combat turns out to be more involved than I’d thought. For example, I couldn’t just sneak up on the enemy, I had to initiate the attack or the game simple assumed I was the one being ambushed, despite my positioning. After using a gun, I went to reload in an enemy’s face, only to learn that reloading takes up a turn. I thought having a sniper character safely on a hill would be a good idea, but Thormundsson took one look at my screen halfway through a battle and mentioned how many turns it would take for that character to catch up with his mates if needed.

Many of my deaths, however, came from assuming my cover was safe. It rarely was. Explosives were thrown over them, shotguns blasted through them, some of them were just outright destroyed. Nothing felt safe beyond being unseen, so the game feels almost like Metal Gear Solid: The Manimal RPG, but without a million cutscenes and highly detailed plot.

On my final (of several) Game Overs, the guy across from me beat the demo, so clearly it was doable (if excrutiatingly difficult!). I may have cheered the loudest since the game really kicked my butt. I’d still give it another go, though, especially Thormundsson mentioned that there will be times in the game when you simply aren’t supposed to attack anyone, just avoid. Maybe that was part of the trick? Maybe there was something in the area behind them that would have made the fight easier? I’m not sure. I just hope that if I do get to play the game at release, I won’t get lost in dating sims and companion reputations like I do with Fire Emblem and just beat the game.