The Star Citizen Reddit is abuzz today – and no, not just about EVE Online’s “Venture Capitalist” skin bundle joke, although they’re doing that too. Nope, they’re buzzing because Cloud Imperium has opened up the testing for the alpha 3.2 build on the PTU for a much broader group of players, including subbers and wave-one PTU backers.

The focus of this leg of the test is mining in particular – scanning, extracting, and prospecting need a work-through. The patch also buffs up the grouping system, turrets, shopping, G-force effects, and orbital quantum travel. And it actually adds some of those old pixel ships that somebody keeps buying, including the Anvil Hurricane and Aegis Eclipse. Pew pew.

As for the EVE joke spawned from the plagiarism argument last week, CCP continues to handle it in the classiest way imaginable.

“One thing I’ve learned when writing is that regardless of where you look, science fiction is a huge melting pot of a genre, where you see inspiration cross the boundaries of IP in every direction,” CCP Falcon wrote on Reddit. “All it does is enrich the genre and bring more life to the narratives we craft and consume. I’m super interested to see what’s next for both Star Citizen and EVE, and contrary to what some of the more vocal fans on both sides of the fence might think, over here in Reykjavík we’ve got nothing but love for our fellow sci-fi developers, and continue to wish Cloud Imperium Games and the Star Citizen community nothing but fair skies and smooth sailing.” 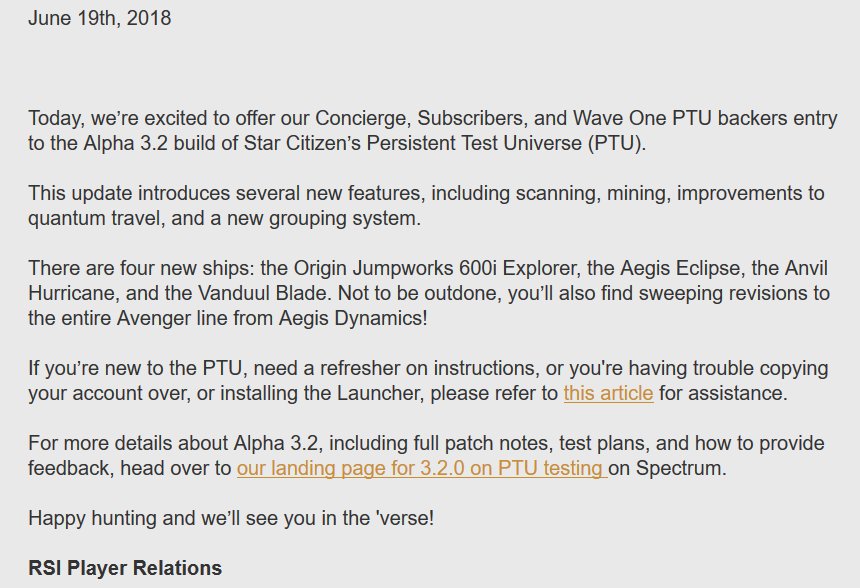 Source: Patch notes. Thanks so much, DK!
Advertisement

The scanning gameplay is still horrible. Its still a golf swing even though we were reassured after the uproar at how horrible a gold swing was for a scanning mechanic that No, scanning would not be reduced to a gold swing mechanic.. and here we are. A gold swing for the scanning mechanic. The mining gameplay looks good. Is he hovering and facing down so we can see the mining arm working or is that CIG? If thats CIG. WTF! Also, the prices for ore looks like its to low. I hope they just this to a decent AEU per Hour margin to make it worth while as a profession.
I have seen some walkthroughs of the 600i, although its beautiful (please change the lighting on the bridge to the lighting in the rest of the ship, low and subtle) I am disappointed in the layout. Those component rooms are off the kitchen? and you have to go from the top level bar to the lounge, through the kitchen to get to the components room for repairs. First of all, I would have the components room right next to the Mapping room on the top floor, and adjacent to the escape pods and the crew quarters. If your working or resting, you should be able to just jump up and hit an escape pod or repair some critical systems as quickly as possible. You should never have to run from the upper level, through the bar, then the lounge, past the kitchen to repair critical systems. It fubar. And then the excessive space in the crew quarters. Give them some tables to play cards, give them some lockers or Video Screens on all that wasted wall real-estate. And for chrissakes how is anyone going to fap on those long voyages without some privacy screens on the sleeping pods. Another bad design that is going to have to be reworked at some point because nobody thought it through. And one last critique of the 600i.. I can take out those remote turrets with a bb gun. The remote articulation arms are fragile, almost delicate. Not what I want to reassure me in a fire fight, and these are the only weapons that dont face forward so they are twice as important as every other weapon port on the ship. Come-on CIG. WTF!
The Avenger is beautiful, The Hurricane looks beautiful. The Eclipse looks beautiful, im surprised EVE players haven’t claimed it looks like one of their yet. Im sure thats coming soon. One thing I have noticed about the ships that have been produced lately is that multi-role is dead. Hull variants are easier than making a ship do a lot of things well. Im fine with that, it would be better to have a game sooner, than having CIG have to figure out how to deliver on all its gameplay promises in the year 2027.

I’m definitely interested in seeing how SC handles noncombat stuff, now that they’re getting around to it. Can they actually build a mining system that’s laid back enough to satisfy the Netflix-and-mine crowd that usually does it in EVE and E:D while also putting a unique spin on the concept for folks who want to dip their toes in without getting bored to tears?

Never mind, this is the best mining system since Ascent’s.

ye you spin the mouse wheel up and down to keep it in the QTE golf swing sweet spot ;)

so just some commentary on the video:

i cut out about 10 minutes prior to this initially spawning the ship looking for the entry portal and having it despawn (this is normal after atime limit to clear landing pad room) just as i got in. then had some odd movement/camera/etc bugs.

in the end of the video i am trying to get the thing to move so i can fly it somewhere more scenic but the flight controls were completely non responsive.

now that we’ve finally gotten a good look at her exterior profile she has some weird looking edges to her and just a strange look outside in general. inside tho every bit of the luxury i bought her for can be found and more. including fully stocked bar which makes me wonder if they’ll add the drink mixing minigame to her.

the only functional stations were the forward positions which control stuff like power management and the ship’s turrets – gonna get some time looking at the combat profiles on those babies soon, but seemed straight forward enough the interaction system’s oddities not with standing. the scannign stations and other probably future interactables didn’t do much except open panels or let me sit down.

did not try the master bedroom bed yet, but was very impressed by that whole thing, up there with my GTAO apartments for digital luxury really :D

I can’t wait to test this. Very excited for this build.

Even CIG was impressed by CCP_Falcon’s comments:

weird thing to walk back

This reminds me – now that it’s late June as well – isn’t SQ42 being released before the end of this year? I looked for the release date but couldn’t find it, although I remember last year being told it was delayed to 2018.

It will be good to have a finished game to judge how CR is actually doing.

Yeah. I think 2019 is “highly likely”, but probably not until the end of the year.

i think we can figure that the 2016 disclosure was incredibly understated in how far from ready the game was then. if not outright deceptive about it.

and it was abundantly clear from that disclosure they had pulled a lot of bullshit with us on it that year (and especially within the previous few weeks and months in particular).

Maybe they meant 2016 in Ethiopia where they are 7 years behind the Gregorian calendar and they still have 5 years to release it .

It has no release date. Its probably another 2 to 3 years away.

The fact that its SQ42 is probably years away from release really begs the question how much trouble the development of Star Citzen is in , if they can’t get a single player game finished what hope is there for something more ambitious like an mmo .

Quote Roger Melly: “The fact that its SQ42 is probably years away ”

Current roadmap, quartely patch and contents of those patch do point in the precise opposite direction.

3.2 is right around the corner, which give us 6 more patch till end of 2019. Just the next 3 till Q1 2019 are going to provide a lot of core tech, gameplay, massive locations and performance improvement.
You can disagree but one of the main complain of many Backers was not to have visibility and effective patch release. This situation is now behind us, to be confirmed at each quarter of course.

Also about “they can’t get a single player game finished“.
Backers are not looking to get another single game player but something which push lines, equivalent to what has been Wing Commanders when it was released.