This week’s edition of Star Citizen’s Around the Verse is taking a detour into a recap of Squadron 42. CIG says it’s been working on combat, animations, the NPC idle system, procedural tech for the actors, object examination and manipulation, weapons tech, destruction assets (I’m here for this), the Vanduul, and utter rubbish. No really, somebody’s gotta build scrap piles and space detritus! That’s going on somebody’s resume! Love it.

It’s another really short episode, but that’s likely because the team is trying to crank out the final version of the 3.2 alpha, which was reportedly supposed to launch in some sort of official capacity yesterday. (It did not.) The same VentureBeat article mentions that the current state of the game allows for 50 players per instance.

Surprising nobody except the blindest of fans.

My dreams of a freespace 2 will go further unfulfilled :P

Freelancer 2 on the other hand…..

Update: CIG has now confirmed that Squadron 42 will not make 2018. You probably already assumed this, but now it’s carved in stone. Thanks for the tip, Joe!

this marks the first time in 6 years of ship sales and 5 years of early access playability they’ve announced a “delay”***** in advance.

so good on them for finally fucking doing it. i mean no one is surprised by this in the slightest but still, it’s yet another positive paradigm shift for SC in 2018.

***** you can’t delay overly aggressive deadlines if teh product was never going to make the deadline and several more years to begin with.

FWIW I’m not actually sure if Joe really tipped this or someone was just trolling using his name, but either way, good stuff. :D

DK I don’t know what Joe’s tip you are talking about but as you said, this is not a surprise for anyone.
Looking at SC roadmap we can clearly see that a few key core tech, new gameplay and performance have to be released by Q1 2019 and more contents, performance and gameplay will keep coming in the others 2019 remaining quarters.

The 6 years early access and ships pledges is also hardly a surprise based on scope plus building a company from scratch. SQ42 must be amazing, there is no alternative.
By June 2019, SQ42 roadmap available or not we will see much clearer what we got from each patch and may speculate about Beta… unless CIG keep their 2018 communication positive shift and give us a not too much speculative SQ42 roadmap :)

I wonder where that Darkwalker75 guy is these days . He was adamant a couple of years ago that SQ42 would be out by the end of 2018 .

Darkwalker75 is doing well and leaving comments whereever he feel useful to leave them.
Still we can much more promote someone who “missed” an estimated time of released by even a year or two on such challenging scope project, rather than those who where adamant about a sure collapse every year since 2015 or who conveniently switched to an even more seriously rotten scam story :)

Thanks anyway Roger. It is nice to care about each other… :)
You may be unintentionally contributed to an embryo of start to unify a community around contents added giving more visibility rather than pure date speculation.

Not to be that guy but this game is still in alpha!?!

making actual progress at a steady pace towards beta now that we can actually see for ourselves on our own desktops.

still tonnes of work content features tech stability everything else too.

but positive things so far this year.

People may disagree but it’s a safe bet that Star Citizen is still another 3-4 years from official launch. Their will be plenty to do before then though.

id honestly argue there’s plenty to do now as long as you don’t mind regular wipes (which imo are a good thing and allow people to play around and expirement more than in a post wipe or infrequent wipe environment).

ofc you have to be willing to put up with alot of headaches and annoyances. i frequenly end up spending about 15 minutes banging my head on the game total spent on it and give up. othertimes i’m willing to go a couple reloads.

i realize when i say it’s the most decent i’ve seen it and more pleasant to play than ever that it’s in the context of playing it semi regularly since 2013 so i see it with rosier lenses than someone coming in fresh and rightfully going “what a broken piece of trash!” alot of the time lol.

Yeah, in 2014 I predicted 2020 for the release (and got roundly attacked). Looks like I was wildly optimistic.

Consider the expense for that 500 person team for 3 years. Some people better be buying more ships/tanks/land.

Wow….Digital Extremes should get a lawsuit going. Those Squad42 character/enemy designs look like direct carbon-copies of the ‘Acolyte’ enemies from WarFrame (including the Stalker).

So first ripping off Eve Online and now ripping off WarFrame. What will they think of next!?

IKR, they both have arms, legs, claws, a roundish head, stuff coming out of them in places, and then there’s the 3 toes, almost identical /s

Thanks for the comparison picture. Now to let a court decide whether it is ‘similar enough’ to constitute infringement.

Star Citizen is an absolute joke at this point. The new ‘Duke Nukem Forever’ but funded by idiots and morons that don’t understand the concept of funding vaporware. Lmao.

But ok then. It is hard for someone to admit they messed up and backed a scam. It is ok. I get it. Maybe the same kinds of people that threw $150+ USD at the Bless Online Founder Packs because reasons. A fool and their money are soon parted…

I played DNF and it sucked, I avoided Bless because it was obvious, and I test alpha SC almost daily and we make lots of smartass remarks about what great vaporware it is.

Did you back SC and have you tried to test/play it recently? if not, how would you know anything about except what you’ve heard.

No one will sue SC for infringement over the Vanduul, not only because they’d lose but because its preposterous.

Your comparison to DNF is called a fallacy of relevance, the quality and funding of DNF has nothing to do with SC. Same with Bless, by mentioning failed games in the same sentence you hope to splash some shit. Try arguing facts instead of innuendo and crappy fallacies and ad hominem attacks.

You’re also ‘begging the question’ here, similar to the “when did you stop beating your wife” approach. All evidence indicates that CIG has used the funding to develop a game, but by claiming its a scam you can then ridicule anyone who has supported it.

it is OK, you don’t like the game or CR or any of us ‘idiots and morons’ who dare think differently than you. I get that, but repeating tired vague nonsense that has been refudiated, you come across as desperate and angry, almost obsessed over a game you don’t play. If you had some factual criticism you’d get more mileage/

i dont think they look the same really at all. the klingons in star trek discovery have pointy bits on there armour to so i guess they should take both of them to court, and the countless scifi aliens in the past with point armour should all be taken to court to eh!!!! the entire vanduul fleet has pointy bits and sharp edges so stands to reason there combat armour would to which isnt wholely an armour piece like that as the better the vanduul is the less armor they have and is molded into there bodies. pretty easy to dismiss it with such a massive art style backing it up 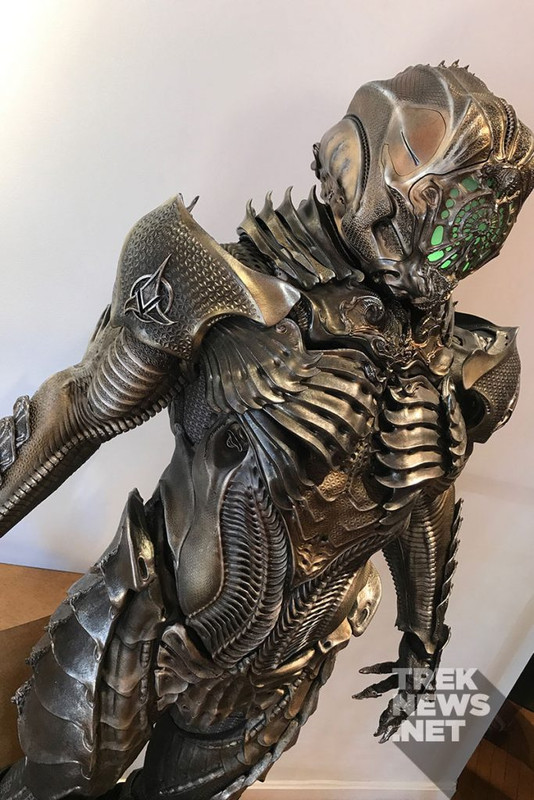 showing off initial design of the vanduul from 2013…. who would win in court? CIG with no competition

reply i made wasnt meant for you

Lol nice memes man, but seriously suggesting the ship was an Eve ripoff is a joke, the Eve ship wasn’t unique by any means and it has been heavily debunked.

Has it really been debunked? Please provide a citation then.

Yes… Because the same design of ship has been used in many games before EVE, I don’t have the mega comparison image a reddit user made and cannot be assed to look it up but some of these designs were ones roberts had used back when he worked at Origin.

Only the mentally deficient cling to cries of “stolen” in this case.

end of the day the vanduul are the new version of the kilrathi from wing commander so there cat like. if anything warframe copied the kilrathi!

Had to look up what detritus meant. *sheepish* Thanks Bree for making me just a wee bit smarter today! :P

My one good deed for the day! :P

Have not seen the episode yet but this interests me. From what I’ve been reading and watching, NPC’s who are not meant to be stationary will always be doing something. NPC’s will have their own ‘Day/Night’ cycle. A real-time, 24hr a day routine that fits that NPC’s occupation and life style so they will not always be in the same place, doing the same set of animations within a short time span. Should be pretty cool.

..article mentions that the current state of the game allows for 50 players per instance.

Is it stable though? Someone said that they were up to 90 players for internal testing. Wonder if that’s where we’re at this pre object container system.

it’s been this way throughout 3.1 (50 player cap) and 3.1 has been vastly more stable than prior releases.

long way to go but going somewhere at least :P

I would say the PTU is pretty official, I think you mean a PU launch to everyone rather than a slightly more restricted wave based PTU launch :P

Yeah, we covered that rollout last week! VB saying it formally launched yesterday is what was mystifying.

i was waiting all day for the patch to roll out too. lol. had the launcher open and ready to go. even checked when i woke up this morning and will check again soon >> 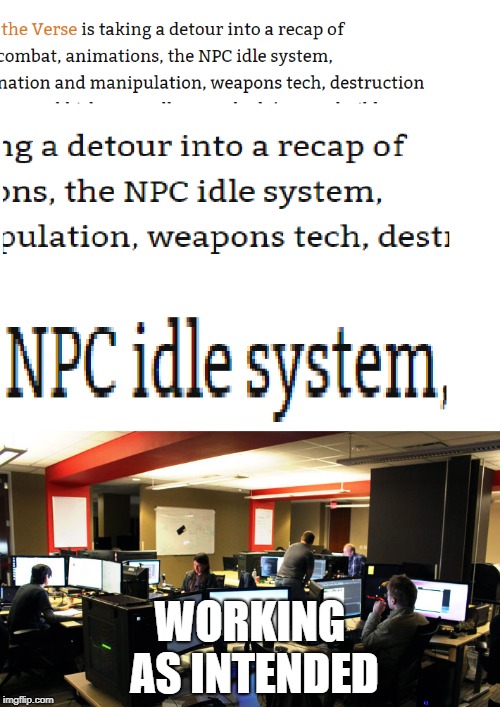 The Daily Grind: What would tempt you to buy something in...