ArenaNet isn’t giving up on Classic Guild Wars, it seems, and it’s not stopping at the basics.

“In the spirit of cupcakes, here’s a sneak peek at some upcoming changes,” ArenaNet programmer Bill Freist teased Reddit yesterday. “And no, the construction dude isn’t new items, just temp dev art for test items.” The tease includes a screenshot of what looks to be a much larger player inventory, complete with item rarity coloring.

Freist, you’ll recall, is one of the pair of ArenaNet devs basically keeping the lights on for the maintenance-moded original Guild Wars (the other being Stephen Clarke-Willson). This past spring, the duo made waves with a tech update that essentially buffed the heck out of the game’s graphics capabilities. They even went on a brief interview tour.

A third dev, Laevateinn, suggests there’s even more on the way. “I don’t have any good teasing images like Bill, but there’s a years-late bugfix or two making their way through the dev servers that I hope you’ll like.” 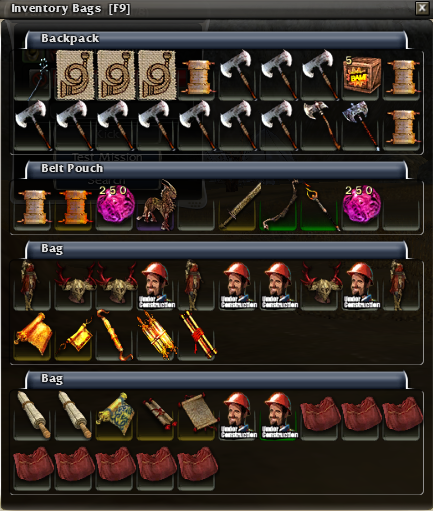 The last maintenance-mode game I tried to play was TSW, and that was so empty and depressing compared to the pleasant experience I’ve had playing GW this week. It’s nice to see that maintenance mode doesn’t have to mean throwing the game in the gutter.

Last night i got into a group. I forgot how fun grouping was in this game. And i joined a guild too. Alot of people running around. Seems like with every bit of news more people show up again.

This is great to hear. I just got GW1 Trilogy for 8 bucks on the steam sale and loving it. I uninstalled every other mmo from my pc to because i’m having way to much fun with this classic.

Next patch: Erasing the people calling you every different name for saying you like the sequel…
…the same people who then keep dancing for 1,687 hours idle on the client that their best friend has been running on their old Windows IT server since 2005.
Ok, back to my LEGOS.

Hm, interesting. The “dev art” placeholder showed up on some Char bags I bought in pre-Searing. (I hope they weren’t duped or hacked or something — I had some drop for me since then and they had regular art.)

I’ve been playing every few days since the graphic update went in and I have a level 16 pre-Searing character now. ALSO! And this is really huge … they fiddled with the timing of the gate into the Northlands in pre-Searing which means you no longer need to get someone to open the gate for you. In other news, gate opening bot I Pull Levers Well disappeared as she was no longer necessary, but was spotted in game yesterday perhaps just to be social. Time will tell.