END_OF_DOCUMENT_TOKEN_TO_BE_REPLACED
Lycanthropy has been a part of the Elder Scrolls lore since Daggerfall, even if it did kind of skip Oblivion. Elder Scrolls Online introduces lycanthropy as its own skill line with both passive and active skills. It was this fun skill line that helped me want to jump back into the game a couple of years ago. It’s not the most useful skill tree in the game, and it certainly isn’t as good as Vampirism when it comes to PvP, but I found it to be a lot of fun and would recommend it to players looking to explore some of the lore and interesting mechanics of ESO.

In the next DLC for ESO, players take to opposite stance and actually hunt werewolves with the Order of the Silver Dawn. Although we don’t have many details about this next DLC, we know that one of the dungeons take place in the Order’s headquarters as its infested with werewolves, and the other takes place in Hircine’s Hunting Grounds.

This Friday at 6 p.m. EDT, Dungeon Lead Mike Finnigan and Writer-Designer Tori Dougherty will give us a more in-depth look at these two dungeons, but before that, we should probably learn all we can about werewolves in ESO. That’s why I’ve broken down how to become a werewolf in ESO and where they come from according to the Elder Scrolls. 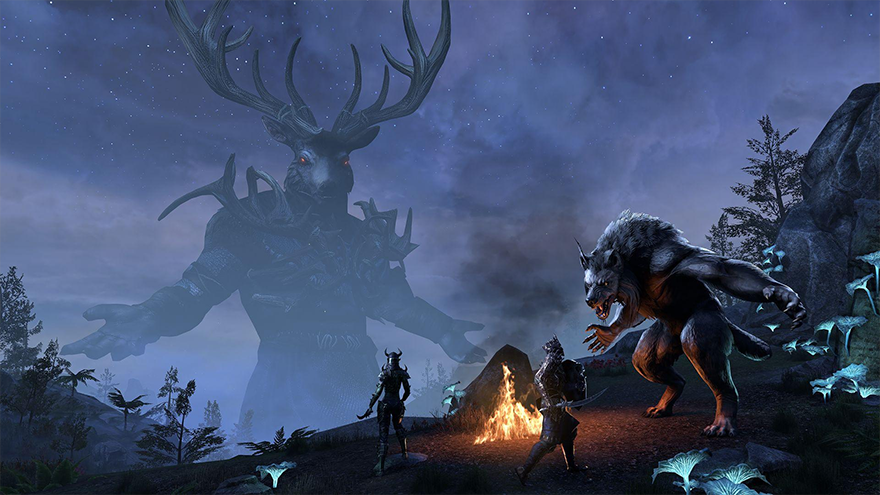 Seriously, the easiest way to get infected with Lycanthropy is to pay 1500 crowns and pick up the infection from the crown store. Although that will start the quest where you can earn the gift of becoming a werewolf, it’s hardly the fun way to do it.

If you have a friend with enough skill in the Lycanthropy, he or she can bite you near Hircine’s Shrine. However, you friend can do that once every seven days, so if he or she has bitten someone else recently, then you will have to wait.

The most interesting way to contract the infection is by finding a rare spawn of high-level of werewolves during a full moon. These wolves are found in Reapers March, Bangkorai, or the Rift. 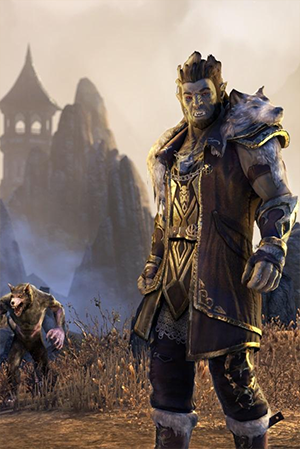 Once you have contracted Sanies Lupinus – which you can see on your character screen in the same place you see you boons – you will gain the Hircine’s Gift quest that will lead you to one of Hircine’s shrines, which will take you to his hunting grounds. There you will be transformed into a wolf for the first time and asked to hunt specific creatures before you are allowed to keep the ability to transform.

During the quest in Hircine’s Hunting Grounds, you will actually be granted all the skills of a high-level werewolf. When you leave the Hunting Grounds, you’ll have to start from scratch, but while in the Hunting Grounds, you’ll find it’s a good time to test out your skills. Wolves have a gap-closer, disorienting skill, a knockdown, a bleed, and a self-heal. While you’re in the Hunting Grounds, there is no timer on your werewolf transformation, contrary to Tamriel proper. I would recommend jumping into a delve (preferably one with a lot of Daedra because they help build your Ultimate faster) and killing everything in there, over and over. This will allow you to better master the Devour mechanic and understand what will and won’t work with your playstyle.

As I mentioned, there is a timer to your werewolf transformation. This timer is satiated by eating your kills, it can include tiny animals like monkeys or mice. If the timer runs out, you will turn back into a human or whatever your character normally is. That is why I suggest leveling up in a delve. There is almost always something to kill then eat in there. When you’ve mastered the Lycanthropy skill line, you will have a lot of time between kills, but it still has to remain steady. I still recommend holding onto that ultimate until you need it because that time moves faster than you might think it does.

Hircine is one of the few Daedra who is mostly accepted on Nirn. Even though Hircine isn’t nearly as benevolent as Azua or Meridia, he is respected as the Daedric Prince of the hunt. Many of his “children” favor the hunt as well. Lycanthropes of all kinds not only respect him, but they worship him. He, after all, was their creator. The Lycanthropy disease was created by the Prince sometime before the Merethic Era, the same era as the Crytal Tower and the White-Gold Tower were created. In other words, nearly the dawn of time.

Hircine is best known for his Bloodmoon Prophecy. Once every thousand years, Hircine appears on Nirn and the slaughter begins. But Hircine’s slaughter isn’t to destroy Nirn like most Daedric Princes; it’s to encourage the hunt, not that it makes the end effect much better. But I guess it’s all relative in Tamriel. “Oh, you don’t want to kill everyone? Then guess you’re OK in my book.”

The types of Lycanthropy follows the land that it takes place. Werebears are most abundant in Skyrim. Wereboars prefer Daggerfall. Werecrocodiles are found in Black Marsh. And werelions are found in Elswyr. But as you might have guessed, werewolves are found just about anywhere and can pretty much infect any race of men and mer.

There isn’t a lot to know about were-beasts other than their creator and how you get it in ESO. But maybe we will learn more the next DLC. In the meantime, there are roleplay guilds that portray packs of werewolves and you can pretty easily try out becoming a werewolf yourself. I know I have fun being one.

What are your thoughts? Are you looking forward to the possibility of taking on Hircine and his werewolf pack in the next DLC? Or would you rather be a werewolf yourself? Let me know what you’re thinking in the comments below.

Yeah, heh. Wereboars. Always rollback if you get that one, no one wants to be a shapeshifting swine. To this day I know no Daggerfall player who accepted being a wereboar.

No, the easiest way is to ask in your guild and someone will give a free bite.

I remember how poorly done and how overwhelmingly underpowered werewolves were. Then they’d bug out constantly and be unable to feed and get stuck in animations… it was truly awful.

I imagine they’ve fixed all those gripes by now.

My main is a Werewolf. Crazy, crazy strong burst damage. Better sustain than I thought. But very vulnerable to certain types of damage. I have fun with it. But I’m not looking forward to being surrounded by hundreds of them in a few months.

No worries Vampire is still OP for a lot of builds.

And full of people complaining they want their vamps to look pretty.

Yeah My Archer keeps it as emergency get out of trouble power. Wow does DPS go up.

It was very disappointing that werebears didn’t actually show up in Skyrim.