Here’s the weird part about this week’s column: I’m going to tell you, in short, that Final Fantasy XI is still a good game once you get past the initial hurdles involved. I am also going to tell you that it is a game which has not aged well, in part because of those facts. Which no doubt is going to sound kind of weird, but that’s the situation we find ourselves in. 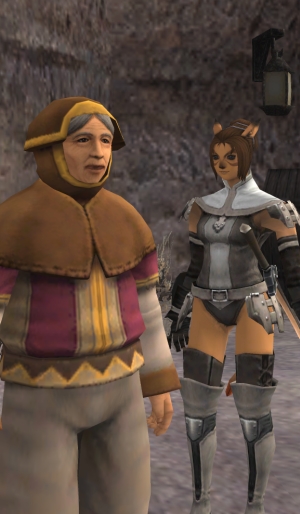 The former is the main reason why I set the ground rules for myself that I did. Can I get an advanced job to level 50 without any outside help in one month? The evidence says yes. It wasn’t even difficult. There were some frustrating parts, but my play time indicates that it took me about 18 hours… and I hasten to point out that FFXI has not been my main game for years now. In short, this is something that anyone can do. The game is far more open than it has ever been, and that means people can actually, like… play it.

So that’s all good. But this is also something where I’m going into the game with a lot of prior knowledge. I didn’t have to stumble around to figure out where to unlock my subjob, I already knew, and I could thus bend a lot of my time and effort in exactly that direction (even while using the faster method to unlock it). Sure, I had to come up with substitute leveling spots when some things weren’t open to me… but I knew how to find them, didn’t I?

All of this might seem secondary to anyone who had played the game before and is still sort of floored by the idea that you can actually level in this game without it being a steady pile of nonsense. Just being able to level without a parade of awful groups on the Dunes where you might get a level a night if you’re lucky is a revelation! And yet…

I can, comfortably, say that FFXI is still a good game. It really is. But the biggest problem that it has is that it’s still horribly opaque to everyone. It’s pretty opaque even to me, and that’s as someone who knows the game backwards and forwards. There are still things I find that I do not know, parts I miss and ideas that aren’t communicated.

And by extension, the developers don’t really want to change it. Why would they? Players who have been in for a while likely aren’t going to care too much about the quality of getting into the game with a fresh character; there is a reason it was important for me to cut off all possible means of supporting a fresh alt, because that would have made things much easier. And similarly, veteran players also are unlikely to attract people without offering them the means to get a toehold into the game, as well.

The net result is that the game isn’t broken, but it has a serious problem with any guideposting and what players are actually supposed to be doing. It doesn’t tell you what it wants you to do, just lets it all lie there and flop around. Yes, there was precedent for this for a long while, but that doesn’t mean it’s a good look for the game right now.

I also find myself split on the matter of how much the game is going to hold the interest of new players anyway. After all, the game is for all intents and purposes done; there’s not some new major release waiting in the wings, it’s all a matter of what’s in the game right now. There are quality of life changes, but the solo experience lets you see the story without getting some of the meat of what made the title fun for so many people.

And the story has problems, it can be slow to start, and several of the “best” stories have kind of gotten buried over time. It’s… unclear, in short. You don’t know how much you haven’t seen, and there’s not much to point you toward what you haven’t seen.

Despite that, I think that ultimately it’s a game of contrasts. It works, it holds up, and there’s a lot of stuff to like about it just the same. I also think that the problems it has with letting people know what to do and where to start are going to cause some pretty big issues that don’t need to be there. So as I said before the cut – it’s a good game, but one that also has some significant issues getting into it.

If you’re an old hand wondering if it’s worth taking a dip back in? I’d say so. If you’re a new player with some friends? You’ll have fun. And if you’re a totally new player who’s just curious? Just be prepared to be confused.

Now, let’s get things back on track, and what way to get back on track better than a game which prominently features tracks? That’s right, I’m talking about Trove, a game I’ve played multiple times in demos but never actually given a reasonable shot at in any other capacity. Whether or not I would like it is a matter to be determined later, but it does feature a great deal of neon, which often piques my interest.

Perhaps, however, I should go for something less neon-shaded but equally silly in the form of Blade & Soul, which swaps surreal lighting and weird blockiness for surreal oiled skin and weird overall storytelling goals. I played the game briefly and it’s showed up here multiple times, but it’s never quite had the push to become my next choice. Will this be its moment in the sun?

Last but certainly not least, there’s RIFT, which is a game I dipped my toes into a few times but never really got locked into it. It’s always felt vaguely like another swing at what World of Warcraft originally was with different design philosophies, and it also has always seemed to be at once a bigger and smaller game than I realized. But perhaps there’s where I should focus my attentions for the next month.

You tell me! There’s a poll here.

CMA: Choose my next destination!

This round, polling will run until 11:00 p.m. EDT on Wednesday, July 11th, so you have time to make your voice heard. Feedback before that can be left in the comments down below or sent by mail to eliot@massivelyop.com. If you don’t mind, I’m going to start working on some limit break quests now that my character is just a regular alt; I do enjoy FFXI, after all.

Welcome to Choose My Adventure, the column in which you join Eliot each week as he journeys through mystical lands on fantastic adventures — and you get to decide his fate. Especially if that fate involves lizards and cats.
Advertisement

I did this three years ago. I started from scratch, didn’t even touch my original character, and played pretty hardcore for a month by myself. I actually joined my original LS, which has existed since the game was new, but it was all new faces. It was a rush. It was like experiencing the 7 years I spent on my original character in super fast forward. In the end, I accomplished more in that one month as a solo player than I did in the first 7 years of the game and cherished every moment of it.

I would love to do it again, but I’ve tried unsuccessfully in getting any friends to really give it a shot.

For the guidance on how to do things in ffxi, they have added a lot more than there used to be, through the tutorial NPC in starting towns, the tutorial objectives in records of eminence, and the adventuring primer on their web site, which was also added, weirdly, to the help desk menu in the game, and is there in complete form with images even. Old players just don’t know to look there.

I know none of the games in the current poll

I think Trove would be an interesting one for Eliot to take on. On the surface its simpler than most other mmos that he plays and I would like to see if he can find anything that would keep him interested if he digs a little deeper than said surface.

Pretty spot-on FFXI review. I sometimes consider FFXI when friends are looking for a new MMO. But while I’d be willing to help them figure everything out, I know they just wouldn’t enjoy all the little barriers to entry. That being said, it looks like a friend and I are about to dive back in. Looking forward to that.

Think I’m gonna choose Rift for the next CYOA. I’ve never been able to get past the opening zones and I’m curious what the game looks like past that.

The thing is that while there’s a lot of joy to the game – and it’s a blast now as a veteran – it’s really hard to communicate all of that. You get the notes but not the music.

None, I really rather see a try at Worlds Adrift, or Citridail Forged with Fire. Keep those two in mind. Good review on FFXI.