END_OF_DOCUMENT_TOKEN_TO_BE_REPLACED
Heaven-on-High is not quite the same as the Palace of the Dead. That is not surprising; they’re different places with different lore and slightly different goals for their place in Final Fantasy XIV’s overall breadth of content. But they’re both part of the same food group, so there’s also the basic expectation that Heaven-on-High will be, functionally, Palace of the Dead 2. Which is… not inaccurate.

This is, in summary, an iterative take on the idea already established rather than a whole new frontier of content. It has both good sides and bad ones, and by and large I think it’s an improvement over the first version of the Deep Dungeon content. That doesn’t, however, mean that this take is flawless. It doesn’t even mean that every addition even enhances the overall experience. So let’s start prying into the dungeon from my first several runs, picking out the good parts from the negative and seeing what works for the future. 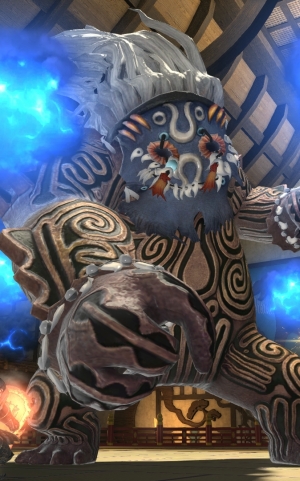 The first thing to note that works really well about Heaven-on-High is that, well, the Deep Dungeon is still a lot of fun. Unlike the several takes that were tried for Diadem and the still-being-refined approaches for Eureka, the developers got the Deep Dungeon format largely from the start. So that’s a major feather in its cap right away; even if this were a bad version of the content, it’s still a pretty good core format.

Having a more “compressed” experience also helps; 1-30 feels less like a slog than 1-50 did in Palace of the Dead, and far less than 50-100 did. That’s not to say I dislike 50-100 so much as… well, but that point some of the charm has gone out of the room, so to speak. There’s no longer the fun of gaining levels, replaced with a sequence of fights when you really want to skip as much as you possibly can the speedrun everything. Not so here; the challenge is from 31 on, and no one pretends otherwise.

The dungeon also feels more rewarding, in part because it’s specifically targeting this expansion’s level band. I don’t consider this a failing of Palace; there’s not much to be done about the need to have the first iteration of this content be available to everyone. But HoH doesn’t have that same problem and thus can be filled with somewhat rarer items and somewhat more desirable hoard tables. No fireworks yet, at least for me!

For that matter, generosity seems to be the order of the day; there are no floors where I’ve felt like the run ended with practically no treasure awarded, compared to several such runs in Palace. Pomanders, aetherpool enhancements, and even magicite shards seem to be readily available. This is especially visible in the still-open 21-30 run, which is the fastest way to power up and grab rewards as you head for the exit.

There also seem to be a higher quantity of floors with enhancements, which I like. Random changes to the mechanics like that are things which are just fun to deal with, since none of them trigger on boss fights and thus allow you to have interesting challenges within the dungeon proper. Although “Sprint Disabled” is still pointless.

Last but not least, the big open rooms? Those are neat. They’re not a huge shift to the format, but they’re a fun change.

The shifting of certain pomanders hasn’t really done much to fix or alter the core mechanics, and honestly, the new pomanders we got are largely underwhelming. Concealment is only useful in specific circumstances, for example. And it doesn’t change the fact that some pomanders are just plain better or more widely applicable than others; Witching is still more limited than Steel, for example, and I’d always prefer Flight to Alteration.

For that matter, we’ve still got the damn Pox ailment, and that was one of the things I had hoped this iteration would remove. Pox doesn’t add much of anything beyond some menu-trawling chores, unless you’re in a bad situation and it winds up being a practical death sentence. Which is also uninteresting; it feels like bleeding out at low levels due to Poison effects, when you know how to deal with the problem but don’t actually have the option.

I’m also not really sold on the whole addition of magicite. In theory, it feels like a fun addition, but thus far in my experience the various flavors of magicite all work in the exact same way for the exact same effects. No, there aren’t a whole lot of “fair” variants between them if any of them clear the whole floor, but the result seems to be that we don’t need three different items; we just need one. Even if there was some sort of passive effect from having one or the other in our inventories, that would be something. The fact that it could just as easily summon a random Primal makes the whole thing feel… well, kind of underwhelming. Especially because it’s Titan, Ifrit, and Garuda again, while poor Leviathan, Ramuh, and Shiva sit in the corner wondering if anyone will remember they exist this expansion.

Let’s not even get into Ravana, Bismarck, the triad from Azys Lla, and so forth. We have lots of other primals, darn it.

In a larger context, I’m not super happy about the fact that your reward for clearing things a bit is a 365 weapon while the non-raiding contingent of the population (i.e. the majority) still can’t uncap weapons to 370; this expansion has generally been really bad with upgrade items for weapons, delaying them to the point of near-pointlessness. It’s the sort of thing that makes you not want to bother with Omega and the weekly grind there, because you know there will be another option aside from running the latest raid to get a nearly-as-good weapon. It’s a messy system anyway, but it strikes me that it’d make far more sense to ensure that the not-quite-as-good weapon was available around the same time as the weapon upgrade tokens, not before.

While I’m happy that we’re getting another part of the Deep Dungeon, I wonder what the addition here means for the future. It was nice that we got a big update to Palace of the Dead partway through the last expansion; now it feels more more constrained, like we’re not going to have as much use for the dungeon once we’ve upgraded past the weapons. It’ll still be good for leveling, but the dynamic is going to be more messy for further endgame relevance.

Obviously, the more constrained format is a good thing overall. But it does mean that there’s a harder cap earlier, when we had more space to expand in Palace of the Dead. And it feels a little more divided, like this will become something of a ghost town once the next expansion rolls around. There may not have been a better way to divide it, but still.

However, it’s also still fun content, and while there are issues with it I still love the Deep Dungeon format. So I can’t be too annoyed.

Feedback, like always, is welcome in the comments down below or via mail to eliot@massivelyop.com. Next week, we’re heading back and we’re finishing up the beast tribe ranking.