Unlike some indie MMOs that keep an intentionally vague timeline of development, the team at Novaquark has mapped out the development and testing of Dual Universe from now through launch. Even better, the studio has announced that all Kickstarter backers of the sci-fi sandbox will be granted alpha access by the end of this year.

Alpha 1 is scheduled to dominate the rest of this year with world building, the ability to save designs, and harvesting. Alpha 2 will take place in the first half of 2019 with markets and character progression, followed by Alpha 3’s PvP combat and ship combat over the rest of that year. Then a much bigger beta test is going to arrive in the first half of 2020 with territorial warfare and a full galaxy to explore. Finally, the official launch is slated for the second half of 2020, complete with character customization and pets.

Dual Universe recently raised an additional $3.5 million to help fund the project, which makes the total budget to date $11 million. These new funds will be used to hire additional staff and “accelerate development.” 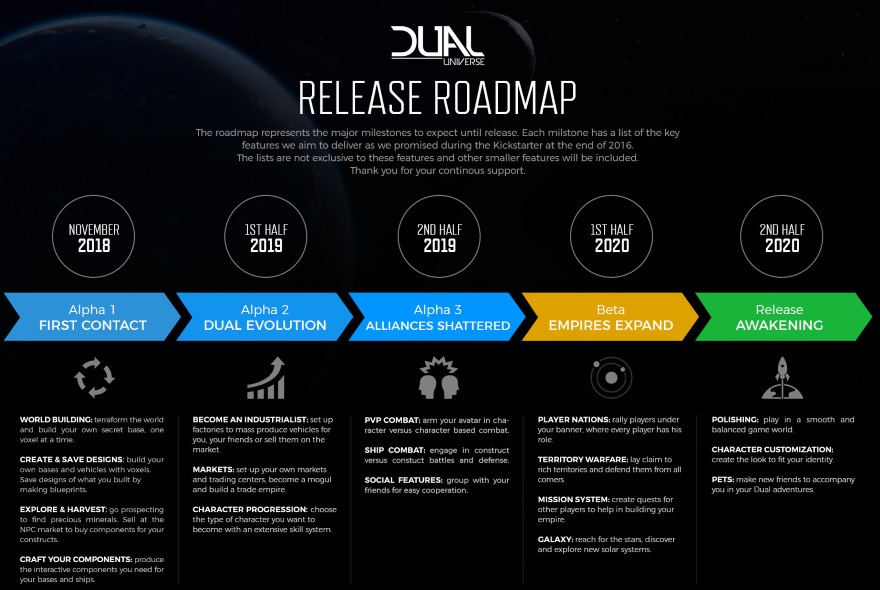 This looks fun, and it is coming down to this or SC in the future for me. What keeps me from pulling the trigger on either is the PvP. What worries me about SC is it seems like you can get ganked anywhere and in Dual Universe it looks like there are (relatively) safe areas.

Am I reading them both right? I know it is alpha for both so who really knows.

SC looks beautiful however DU seems to have upped their graphics game, which kept me from backing DU originally (yes I’m that shallow :P )

Thanks for your thoughts.

Also maybe this is less likely to be pay to win than Star Citizen .

While I’m interested in both they are very different beasts.

In SC players are only going to be about 10% of the freelancing population with NPC’s being the other 90% and then you’ll have various nation states with their own navy as well. The amount of damage a group of players even a large group is minimized this way. SC aims to be game where you work live and adventure in a rational galaxy.

In DU you will have much more power to shape the universe but you will also be much more at the mercy of other players.

Good for them, getting that additional funding must be a nice boost. The roadmap looks sensibly achievable as well.
Not a backer but I’m keeping an eye on this game, they’re doing some pretty cool things.