END_OF_DOCUMENT_TOKEN_TO_BE_REPLACED
While I have been an MMORPG fan for a very long time, I was also a comicbook fan long before the MCU was a thing. X-Men was my comic of choice. There had to be about a dozen different X-Men titles at one point or another, and many times the characters in those different storylines would cross titles. In fact, a worldwide favorite character like Wolverine could appear in a half-dozen titles in the same month, and that always confused me. How could one person appear in so many places at once? Now, I understand that there was some fudging with the timeline, and it really wasn’t all at once. But he was involved in so many different adventures and troubles that he became the only connecting thread between some of them.

If viewed from a certain perspective, it could be assumed that Wolverine was the cause of trouble that he ran into. Trouble seems to follow him like murder followed Jessica Fletcher. This is the way I’m starting to feel about my character in Elder Scrolls Online. Everywhere he goes, trouble and death seem to follow. In fact, with as many people who have died around my character in ESO, I’m surprised that there is anyone left on the continent of Tamriel at all.

For latest disparate adventure, Wolfhunter, I snagged some of the ZeniMax developers to tell me exactly what was going on and why we are testing the patience of yet another Daedric Prince. On the public test server, Creative Director Rich Lambert, Dungeon Lead Mike Finnigan, and Lead Content Designer Jeremy Sera explained to me everything about one of the newly created dungeons: March of Sacrifices. 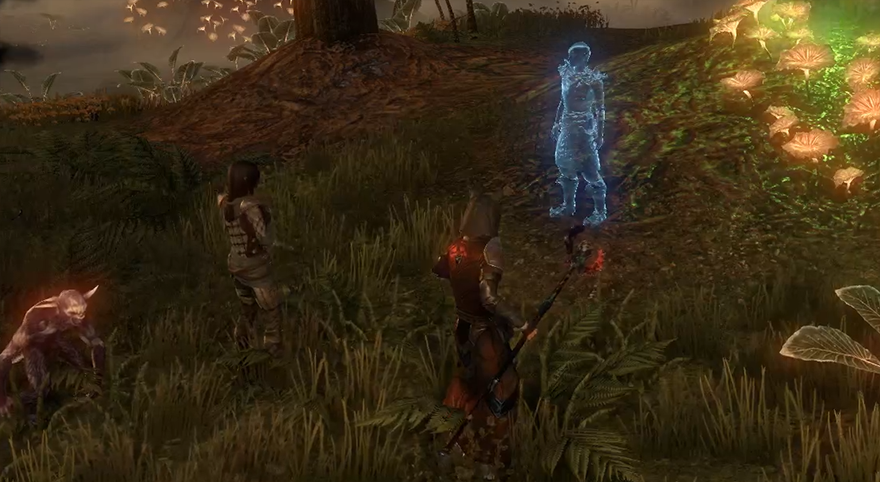 Here’s where things get comicbook-like

If you played through the Morrowind expansion story, then you’ve probably spent some time in Ald’ruhn (you know, the place with the giant mud-crab shell that people live in?) and with the Ashlanders. Part of the entire main story was disproving Conoon Chadala as the Nerevarine. To do this, you have to commune with the Ashlander dead. This is a major part of the Ashlander culture, and it carries into this dungeon.

Hircine has called a Great Hunt, and Hanu is taking this opportunity to not only participate in the Great Hunt but to also commune with her father. I’m not going to give away the ending just yet, but let’s just say that things clearly don’t go as planned; the challenges faced in the Great Hunt extend beyond seeking out Hanu’s father. 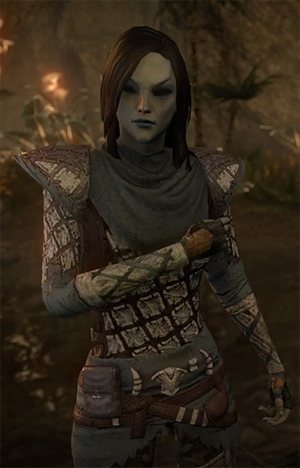 In the Great Hunt, the target is called the hare. For this Hunt, the hare is a powerful Indrik, a unicorn-like creature with magic abilities, named Tarcyr. Of course, your group isn’t the only one looking for the hare. There are many other groups looking for this hare, too: a group of Nords, some Wood Elves, and most importantly, a group sent by the ancient werewolf Vykosa led by a man named Balorgh. I think it goes without saying that the last group there ends up causing a lot of trouble for your group.

However, to get to the hare, we must fight through the forest where three Wyrd Witches reside. They become the first boss encounter. And like most boss encounters in any game ever, they have special mechanics that you don’t find in many trash creatures. However, Finnigan mentioned in my run that the creatures — such as the bears — have similar mechanics. In this case, the bears and the Wyrd Witches cast an aura on the grown that strengthen the other enemies around them. In case it wasn’t obvious when you fight the Wyrd Witches, you will not want them close to each other, even after they die.

I asked why the developers why they decided to keep the auras persistent after death, and Finnigan replied, “To keep the pressure on the fight, their spirit animal will spawn has the same aura as when you were fighting it. And it runs around in random directions. It maintains a little bit of the pressure and ensures that the fight doesn’t get easier as you defeat each [Wyrd Witch].”

The next boss fight involves almost the opposite mechanic. Aghaedh of the Solstice spawns lurchers that correspond with the seasons. The lurchers are weakened when drawn toward a plant of an opposing season. When the lurcher dies, a seed will drop that the player can pick up. This seed will protect the player from Aghaedh’s AOE, if the player is standing in range of the corresponding plant. This fight was not difficult, but in the veteran mode, one false move or standing in the wrong place could be instant death. 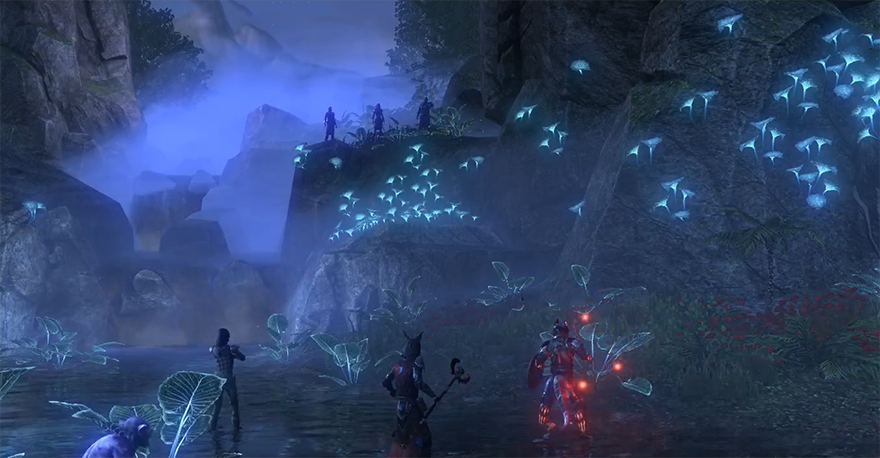 I nearly forgot about the third boss. And I really only remembered it because I was rewatching my playthrough as I wrote this. Tarcyr lifts the Nord hunters that I mentioned before into the air and kills them. But before he runs away, he reanimates the Nords, sending them after you. There are four phase mechanics for the undead thralls that revolve around fire, ice, and electricity. Basically, just stay out of stupid as much as you can.

The fourth boss fight was definitely my favorite fight. In fact, it could be my favorite fight in the game. It was definitely the top fight in this dungeon. Finnigan explained that they wanted to maintain the feeling of a hunt for this boss encounter. Players have to stealth in order to avoid Tarcyr’s area-wide protection. If you are caught unstealthed during particular phases of the fight, you will be lifted into the air like the Nords and dropped. If you’re lifted enough times, you will die, also like the Nords. Hanu’s father as also provided the party with a wisp that will track Tarcyr and will glow green when it’s found the Indrik.

The fifth boss (yes, there are five bosses) is the werewolf Balorgh, and I said I would quote this from Finnigan: “A werewolf is a wolf with less wear and tear.” You’re welcome.

Balorgh’s fight turns you into the hunted. When the fog falls during the fight, Balorgh will track one player. That player will want to find the glowing blue trap that Hanu’s father laid to stun Balorgh.

If this were a comicbook written for your character, it would be a one-shot because it’s not really connected to anything else you’ve done in game. But it is loosely connected to the other Wolfhunter dungeon. If it didn’t have the Daedric Prince Hircine directly involved, then it would have very little ties to anything else. And it also appears to be out-of-the-timeline. It’s hard to tell if there are any other major events surrounding the storyline or why you are even there in the first place.

As I said, I really liked the fight with Tarcyr, so mechanically, the dungeon is fun and sound, but unless you’re a hardcore fan of Hircine (as I am!), then it might be difficult finding an emotional connection to the dungeon. The characters presented in the dungeon only make an appearance here, and it’s unclear whether they will ever make another appearance.

If you’re looking for an answer as to whether you should buy this DLC on August 13th, I would have to put this thus: If you like group dungeons, then do it. The mechanics are fun and very team-oriented. If you are looking for a compelling story, then probably not. It’s not a bad story, but it’s not super compelling in the grand context of Tamriel lore, and the fact that it’s not connected to anything else makes it hard to get into.