There’s so much involved with Pokemon Go for new (or returning) players to adjust to that even knowing what’s “good” can be hard to figure out. For example, Jolteon was one of the best Pokemon in the original games due to its speed and status affliction abilities, but as that doesn’t translate well in PoGo, poor Jolteon’s use is often B-tier at best. You’re much better off with Zapdos or Raikou if you have one.

Then there’s figuring out stats. Yes, you’ve got Raikou, but when you’re looking at four of them, you may not be sure which one to spend your limited candy and dust on. While the August 2016 updated added an appraisal button that certainly helps (especially once you’ve learned how to read it), that doesn’t necessarily tell you what’s worth investing in now or in future updates. That’s what this guide is for.

The math behind the monsters

Don’t worry about the above header, I’m not going to directly break down any formulas. If you’re just looking for a quick and dirty answer in this article, scroll down to the next header!

While it may seem like those big number at the top of your Pokemon (the CP) are king, there’s a lot going on to form that number. You may have heard talk about IVs a lot, the hidden values of a Pokemon’s stats. Underneath that, though, are the species stats of a Pokemon. For example, Blissey’s attack stat of 126 means you really don’t want to use it in a dps race scenario (like most raids), as even Pikachu deals more damage. However, Pikachu also doesn’t have the bulk (HP and defense stats working together) to survive for long. That’s without considering their move sets, as single bar moves may not be usable before a Pokemon faints.

It’s confusing, I know, but don’t worry because I won’t go over any equations (you can see them here if you want). Think of species stats as your starting stats, IVs as a Pokemon’s ability to max out those stats (0 being the lowest and 15 being the highest), and CP overall power. There are also levels (1-40) that raise all those stats, but all you really need to know is that the level is there.

Like any MMO, stat varieties generally only make a Pokemon a bit better overall. It’s there for us min-maxers who want to squeeze the most out of our resources and maybe do some really challenging content that Niantic doesn’t intend for us to do, like the player-created Venomoth challenge. IVs should only really be considered if you’re going to challenge yourself (or have very few people to raid with).

If you’re a very casual player, here’s the TLDR version of this article: Focus on keeping Pokemon with high attack, high CP, and high IVs, in that order. If you want to actually use stardust and candy to make it strong, then it’s high attack, high IVs, high CP. Seems easy, right? Well, with so many Pokemon out there, you probably know some are better than others, so I’ll give some more tips on which Pokemon to strongly consider as a priority.

The first thing you want to look at is type, as type strengths and weaknesses are a core part of the series. Here’s the chart I still recommend to my local players that covers all future Pokemon. It gives you an idea of where the long game is going and was updated for the recent stat rebalance.

Again, I’m trying to generalize. For example, I tell people to have a good Machamp because even though Blissey and Chansey have lost their stranglehold in the defender meta, lots of popular gym Pokemon easily fall to fighting types. However, in the long run, Machamp will be replaced, so it’s OK if you don’t have a Perfect IV one. For this reason, especially for new and returning players, look for Pokemon that have a high CP for short-term use. They require little to no investment and will get the job done. Here’s a few accessible Pokemon I recommend having just for high CP. 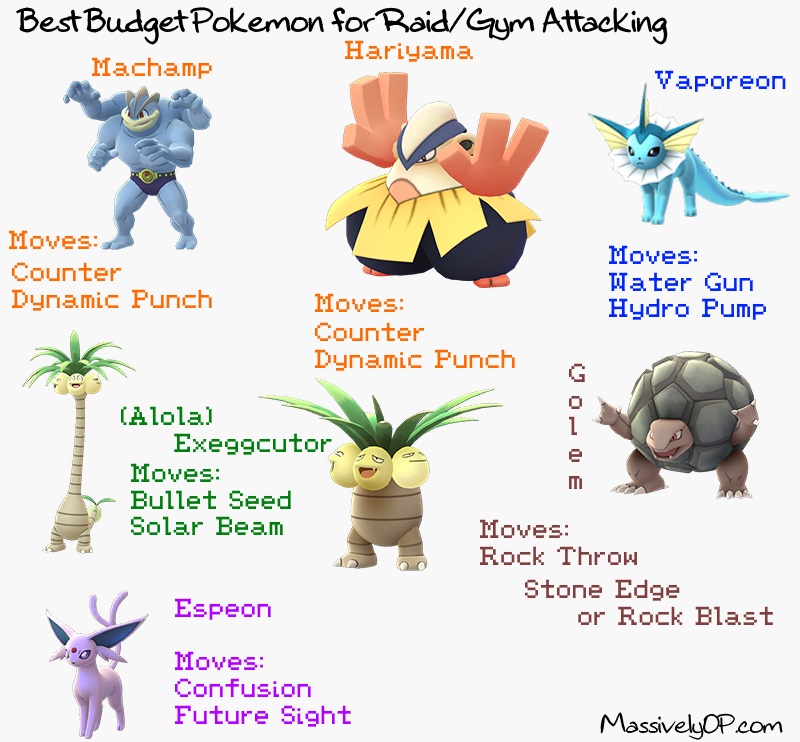 Again, these are attackers. Do not put these Pokemon in Gyms unless you have plenty of them or have upgraded them. Vaporeon, the Exeggcutors, and Hariyama aren’t bad defenders, but especially when you’re still building your teams, you might find yourself in a pinch if your attacker is stuck in a gym when you need to raid with it.

While you’ll want certain powerhouses, like Dragonite, Tyrannitar, and Mewtwo, these picks are from Pokemon you’ll most likely see a lot through wild encounters, quests, and evolution. You’ll probably be using them for a good while aside from Espeon, which only makes the list because there may be situations the others aren’t suitable for. Until you have a better “generalist,” Espeon should be a decent choice for its DPS game. If you’re unsure how to get the different Eevees, Eurogamer can help with that. This is all in the short-term though.

Long-term investment is the other half of the equation. Without considering trade values or the potential for Pokemon Breeding (which Niantic hasn’t confirmed will be in the game), high IVs Pokemon are the ones you want to keep. You can use that with GOIV for Android users, as it’s incredibly lightweight and doesn’t require a picture for you to scan your Pokemon’s stats (it’s an overlay). If you don’t have access to an Android system, the best you can do is PokeGenie, which is still pretty good.

What you want to focus on is having Pokemon at the highest rating (~82%+) with a max attack stat. While stamina and defense matter, battles tend to be more about downing the enemy Pokemon as fast as possible. Because of the dodge glitch and the fact that taking damage generates energy, that means raiding sadly tends to devolve into mindlessly mashing the special button for several minutes. Don’t worry though! As long as your group leader seems confident that the raid will be successful, you can use the raid to socialize with people.

Other Pokemon to keep

So you know to collect some high CP Pokemon to use as needed, and you made a wish list of Pokemon to invest in for the long term. Anything else worth keeping? YUP!

First, keep spare pidgey, rattata, and any common local Pokemon that cost 25 or less candy to evolve (or 50 if you have, say, over 500 candy of that type). These will be for “mass evolves,” a kind of power leveling. When you hear about a bonus XP event and/or use a lucky egg (a premium item/level up reward that doubles XP), these will be the Pokemon you evolve to get experience faster. Only evolve them once! The candy/XP ratio favors single evolution over multiple evolves of the same Pokemon. So just make Pidgey into Pidgeotto, unless you don’t have a Pidgeot, in which case only do it once for the Pokedex entry, which gives additional XP for the first of each kind you acquire (catching, evolving, or trading). You can combine this with friend bonuses, which give much more xp than just evolving.

You also may want to click through GamePress’ list for Pokemon with “legacy” moves. These Pokemon are worth more for trades. While most high-level players probably don’t want or need many of them, some have a certain amount of nostalgia. If it’s too much work, check for Gengar with Shadow Claw, Snorlax with Body Slam, Lapras with Icebeam, and Dragonite with Dragon Breath and/or Dragon Claw. There are some other nice legacy movesets, but these are meta-relevant and/or fan-favorites. If you have a few to spare, you may want to consider using them in future trades, as I know people who would trade legendary Pokemon like Mewtwo or Rayquaza for them. That being said, Gengar with Shadow Claw is one of the strongest Pokemon you can have, so think hard about that trade (and keep at least one male with it, just in case).

And that’s the last thing to consider when hoarding Pokemon: trading potential. Chansey, Blissey, Snorlax, Lapras, Dratini, Beldum, Slakoth, Ralts, Alola Vulpix, and Feebas are fairly safe bets, as are 2016 Pokemon and legendaries. Any Pokemon caught in July-August 2016 will guarantee that both trading partners get a lucky Pokemon if the 2016 Pokemon’s owner has less than 10 lucky Pokemon. This is key because you can use it to ensure that legendary Pokemon are lucky, saving you 50% of the stardust required to level them.

From there, it depends on your local communities. If you’ve got an Eevee fan or lots of people are searching for Larvitar candies, obviously save those. Also, if you’re traveling, remember there’s regional Pokemon only available in certain areas. All of this is subject to change, of course, so don’t be surprised if this guide changes after an update to the game!

This is way more thought than I want to put in this game!

Don’t worry! I’ll try to put in quick TLDR tips in the future. Heck, I just updated this guide again with you in mind <3

I am so not ready for the new evolutions. Time to get catchin’.