In a conversation about the recent Starflight 3 Fig campaign – which you won’t see covered here since it’s not multiplayer, but let me throw in an OMG and a squeeee right now anyway – a guildie of mine wondered aloud whether anyone really cares about art books in these campaigns. I’m with him; art books aren’t my thing. I probably wouldn’t pay for soundtracks either since YouTube is awash in free video game music.

On the other hand, I am a sucker for maps. I still have my original Ultima Online cloth map, for example, as well as my City of Heroes maps, the latter of which I used to hang on my walls because I never could freaking remember which line went where. This game doesn’t even exist formally anymore, but I still have my maps!

I thought it would be a fun question to post to the team and the readers for this week’s Massively Overthinking: What’s your favorite MMORPG swag of all time? What was the game? Is it from a box, a special edition, a convention, a contest? And do you still have it?

​Andrew Ross (@dengarsw): Sorry guys, I think I’m going to pick two! First, I have an original Asheron’s Call PK shirt. Still. Hanging in my closet, worn only for super special occasions to this very day. It’s a cute reference not only for PvP fans, but fans of the game, as it references a major update that took place during the infamous Shard of the Herald storyline. My mother was quite strict and I had to beg her to let me buy it because the Turbine shop wouldn’t take cash. I had to explain that “STFU” had two meanings and one wasn’t very nice. She OKed it. I even wore it on my very last day of high school and a few people I’d kind of lost touch with recognized it and gave me a quick laugh. I even wore it when I met a former Turbine employee working on another game, though I sadly don’t think he noticed it.

As a bonus, I also have a personalized World of Warcraft beanie with my final main’s name and our original guild emblem. Fun fact: I was a guild leader who entered and won WoW Insider’s old Guild of the Month contests several months before I successfully lobbied to become one of their freelancers, which I think helped me get my job here at MassivelyOP. Anyway, the winners got some store credit for guild-themed swag. I divided it up amongst the officers and held a contest for a non-officer to win one of the items, but I paid for my own beanie, keeping to the same restrictions everyone else had for solidarity. The guild sadly died soon after I moved to Japan, but I’m still in contact with some of those guys. It still brings me some good memories. 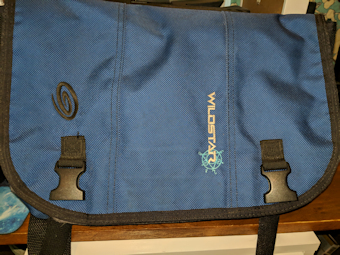 Brianna Royce (@nbrianna, blog): The best swag I’ve ever picked up is actually something I passed along to my husband without realizing how cool it really was. It was a messenger bag from a WildStar event years ago, which the PR had stuffed full of an asset-laden USB stick and a t-shirt and probably other stuff (when I lived in California and attended a lot of PR events, most passed out men’s t-shirts to the nearly-all-dude-press-crowd – I still remember chortling with laughter when a marketing rep tried to hand me a man’s t-shirt as swag while I was seven months pregnant). Anyway, the messenger bag has WildStar’s artwork and logo – it’s huge, so I didn’t even really think about it as more than “a bag to carry the marketing materials for a game I already cover in-depth” because I knew I’d never use it. But it turns out it was super high-quality, and my husband is still using it as a laptop bag in 2018. Who knew? I’m guessing it really confuses his college students!

I still love my maps, though. The header pic for this column is a shot of a pile of the ones I kept, though the weirdest one I own is probably the Tokuno Isles map from Ultima Online. And I still use some of the little paper pads that used to come with the Blizzard expansions. Hah!

Eliot Lefebvre (@Eliot_Lefebvre, blog): Honestly, I am usually not swayed by swag; while I still buy the collector’s edition of each new Final Fantasy XIV expansion, that’s because now I’ve already gotten all of them and I don’t want to break with tradition. The swag that they come with is incidental to me. I do actually love art books and soundtracks, though; those don’t sell me on a CE, but they’re fun.

But none of those are my favorite piece of swag; that title has to go to my little Rowsdower plush from before WildStar’s launch. These things seem to have been made up in small batches as a special promotional item and given away in very small numbers, enough that I still see people wonder why none ever existed. (They totally did! They’re just rare.) A close second is my Mandragora plushie from Final Fantasy XI, gifted to me by an ex-girlfriend and also vanishingly rare on account of, well, being exclusive to Japan.

So apparently my most memorable bits of swag are still all related to stuffed toys. That’s fine with me.

Justin Olivetti (@Sypster, blog): Since I just packed up my office and house, I’ve come across a lot of MMO swag that I’ve picked up over the years. Probably my favorite items include:

There are a lot more, but those are the “big ticket items” and the ones that I enjoy displaying the most.

MJ Guthrie (@MJ_Guthrie, blog): EGADS, MY FAVORITE? I don’t know about a favorite. But I have a full bookcase dedicated now to my game and con swag =D. My Mr Snuff Upalgus DragonCon PixelPal doesn’t count because he is a con thing, not for any MMORPGs. I have collectors boxes, maps, water bottles, glasses, mugs, figurines, pins, hats, squishy bowling balls, pins, and dog tags… goodness I wish I were home to just look on the shelves because it is such a fun variety. I’d mention the GW2 mouse I won at the 5th anniversary party at PAX West, but that would remind my friend he missed winning it by one number. I enjoy the two silver stress reliever balls you roll in your hand kept in a little satin box I got from Dragon’s Prophet (also from a con) and my EverQuest anniversary lunchbox (SOE Live). The stuffed plushies are probably what I would call my favorites though, like my AdventureQuest 3D Moglin, EverQuest Fippy, SMITE Fenrir, and RuneScape Egyptian black cat which I acquired as a gift, at SOE Live, Hi-Rez Expo, and as a gift respectively.

Instead of trying — and failing miserably — to pick a favorite, let me tell you about one of the most memorable. This is super unique swag that I will attribute to EverQuest Next: my Smedley inhaler. This still sits on my swag shelves. Some may remember that story from that SOE Live of many years ago. In a nutshell, when I could no longer breathe during the big reveal night due to a severe allergic reaction to cigarette smoke, John Smedley sent his rescue inhaler to me (he was still up at the stage). And yes, it did quite literally save me and helped me avoid a trip to the ER. That sure would have ruined my con!

Looking around my study, I have the breathtaking poster (framed) of the Handmaiden fighting Darth Sion from KOTOR2, the Vault Boy figure from Fallout, a map of Middle Earth from LOTR: Battle for Middle Earth, the mini Death Star from Star Wars: Empire at War, the boxed collector’s edition of Civilization 5, and a greeting card of Mr. Worf arguing with his ex! lol But mmo swag? Not one single item. Curious that.

I played the heck out of 1 and 2 as a tadpole. I even played the “unofficial” third installment Protostar — the game with all the details changed so that the corporate trademark owners couldn’t sue.

I don’t own much swag, but those that I do own, I love. A replica coin from Elder Scrolls Online, a challenge coin for Shroud of the Avatar, the Shroud cloth map I just got, a full set of lapel pins of Secret World factions, and a pillow shaped like the Secret World lore icon. I love them all.

WeLoveFine used to sell a licensed The Secret World shirt, years ago. Agartha Premium Lager: Taste and See! I still bring mine out for special occasions…it’s my favorite real-world piece of MMO memorabilia.

I’m not aware of there being anything quite like that around for SWL these days. There are some individuals making cool stuff though, like origamisoldier’s pins! (http://origamisoldier.com/#_=_)

There’s going to be a new Starflight? I played the hell out of the original way back in the day. Sadly other sequels to beloved games have made me too jaded to be excited about it.

I still have my signed box copy of Vanguard: Saga of Heroes that I won with some friends at the pre-release convention in San Diego. It’s been the only gaming convention like that I’ve been to and was a really fun event even though the game didn’t turn out like we hoped.

I still have my maps from UO, EQ1 and 2, Vanguard and Age of Conan up on my wall above my play area. I stopped buying collector’s editions when I realized they were starting to be made with materials that wouldn’t last very long. It made me so mad to open the AoC collector’s box and it was a paper map instead of a fabric one. I also still have the artbook from Age of Conan, which helped make up for the paper map blunder.

Firiona Vie statue. I forget which EQ box she came with.

Probably my Age of Conan art book, definitely increased my hype for the game until I got out of Tortage.