Traditionally, massively multiplayer games do not have a large presence on the expo floor for PAX, but many studios had large booths with loud noises and huge screens of gameplay. One studio that I was surprised to see have such a large presence at PAX West 2018 was Perfect World Entertainment. Those of us who are buried in MMOs already know that PWE now owns a huge variety of games, but I don’t know that the general public of PAX has the same frame of reference that we do.

In fact, going into the booth inside the PWE booth, I wasn’t exactly sure what to expect. Admittedly, my expectations were not high. I had zero idea what Remnant was, I really had no desire to return to Neverwinter, and isometric games like Torchlight are not in my normal wheelhouse. I was not exactly thrilled to go to this appointment. On top of that, I was running late because of the lines to get onto the show floor.

But PWE surprised me with all three games. Let me tell you about my first demo in the PWE gauntlet: Remnant: From the Ashes.

I am starting to dislike the elevator pitch trope where people say, “This thing is like if this other thing and another thing had a baby.” But I’m going to do that anyway because that’s what the producers did. Remnant is what would happen if Dark Souls, The Last of Us, and Diablo II had a baby. Achievement unlocked: Elevator pitch trope!

The Principle Designer for Renmant: From the Ashes Mike Maza led me through the demo, which was one of the many procedurally generated levels. At the very beginning of the demo, I had a choice of running as a Hunter or a Cultist. Maza explained that the Hunter carried a long-range rifle, an auto-pistol, and a sword. He also has a special ability that is a shield. The Cultist uses a shotgun, magnum revolver, and hatchet. Her special is a summoning up to three demonic pets to help her in battle.

I have played some bad dungeon crawlers in my time, and thankfully, this is not one of them. The controls were smooth, and although it took me a little bit to break my muscle memory from the double-tap dodge, the keyboard controls made sense. Also, one thing that will likely throw you at first is weapon switching. You don’t swap between melee and ranged by hitting Q or the mouse wheel as in many third-person shooter games. The swap is done automagically because you’re not aiming the weapon. You right click to aim, per usual. Then you left click to shoot, but if you don’t aim first and just left click, you’ll just swing your melee weapon. But if you want to change your ranged weapon, then you have to hit Q. 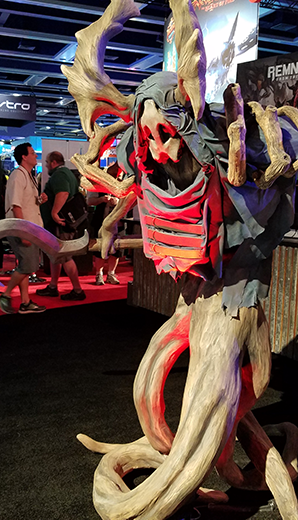 The beats of gameplay

I played through two different levels of the game. And I mistakenly called the first level a sewer, when in fact, it was a subway station. The second level that I visited was not officially part of the tour, but Maza took me there anyway because we were waiting for the next part of the gauntlet to open up. It was a tropical world that was not at all Earth.

I played through the whole subway station level, ending on a boss that was intentionally difficult. I died many many times. I didn’t actually ever defeat it; I kind of wanted to move on to see more things, although if I were at my house, I would have kept going until it was down. My children would all be adults with adult children, my beard would be to the floor and filling the house, and Avengers 38 would be the popular movie in holo-theaters. (Oddly, Avengers 38 will still have Chris Hemsworth, and he will not have aged a day.)

The game offers quite a few good beats of gameplay. As I played, I became more and more cautious about what I was stepping into. At first, I would rush into every fight, and I would quickly get overwhelmed. Maza explained that the characters that we are playing are not gods, and we would have to approach each fight as if they meant something or we would not make it past. And because the encounter scales depending on the number of people in the party, bringing more and more people will not automagically mean that you will do better. In fact, I’m going to guess that until a group establishes a good synergy, bringing more people into the mix will make things more difficult.

I also noted how the enemies on both worlds seemed to appear naturally. It’s a small thing, but too many games just have the mobs appear out of thin air or don’t seem to belong there. These mobs, in many cases, seem to be a part of the environment. The Remnant creatures that grew out of the withered vines naturally were able to sneak up on me without seeming to be a forced mechanic. And in the second zone, which I actually liked a lot better, the natives used their environment to blend in and sneak up on me.

In the end, I’m not exactly sure what I think of the game. I enjoyed it well enough. I didn’t find many flaws other than the minor learning curve for the controls. And PWE has been on a decent trend of creating great content for its other games. I see no reason why you shouldn’t try out the game if this sounds like your kind of genre, but I’m not sure that it’s my genre.

Personally, I’m probably not going to play it next year when it releases. The idea of frustratingly pounding my head against the same boss over and over does not sound like something I would personally enjoy. I understand the mystique and the sense of accomplishment that comes with overcoming the impossible enemy. I beat the original Metroid; Motherbrain was intentionally frustrating. But hey, many veteran MMO players have proven time and again that hardcore challenge is exactly what they want. Maybe this one’s for them.

Played the same demo at PAX. Personal opinion is that it was a little “meh”.

Reminds me a little of Hellscape London.

Yup, first thing I thought when I saw it was how much I’d like to see a real revival of Hellgate: London.

Lost me at PWE.

I mistakenly called the first level a sewer, when in fact, it was a subway station.