If Elite Dangerous has disappointed you with its handling of player events in the past, this week’s situation probably isn’t going to endear you to it further.

Apparently, Frontier decided to work a developer lore plotline in with a player-driven storyline that saw a charter ship, the Gnosis, and its accompanying 11,000 players plot a course for the Cone Sector, a location they were never intended to be allowed to go but for Frontier’s intervention. “Working with Canonns’ event in mind, we decided to weave the event into the large game narrative, and the arrival of a threatening new Thargoid variant – the terrifying Hydra that some commanders woefully encountered recently,” the studio said.

Then an in-universe GalNet lore article emerged with the news that the Gnosis had been stranded in the wake of a Thargoid attack along the way. There was just one problem: That event hadn’t actually happened, or at least, hadn’t happened yet.

Frontier has admitted that the in-universe news blurb was released prematurely, but players are grumpy that the event was – I’ll use our tipster’s epic word – effectively “scuppered” by the inadvertent post, and worse, appeared to show that participants’ actions were never intended to have any impact on the outcome, effectively creating a “godmoding” situation.

Here’s the key bit of Frontier’s apology for the mess.

“Now, we are aware that the premature release of the GalNet article (‘Gnosis Stranded’) caused speculation and concern from the community. It spoke of events that had not yet had any consequence or implication in-game, and as this occurred in the early hours of the morning, had no explanation from the team. We have investigated why that article went live at the wrong time and corrected the community site’s GalNet news feed so that it won’t break embargo in the future. We are also aware that there are a few issues causing problems for Commanders at the current location of the Gnosis. The team are actively investigating and correcting those issues. Some of those issues are already fixed, while others are being addressed and a fix is in progress currently. Please visit the following thread for the current status update on these issues. We would like to thank all of the Commanders who have provided their feedback – and pledged to aid the Gnosis in its defence against the alien threat and the terrifying new Thargoid variant. We would also like to take this opportunity to apologise for the confusion and bugs within this event but we are hugely grateful to the many thousands of Commanders who came together to make the event possible and become a part of history.”

Redditors are more than a bit put out by the situation; some are rewriting the lore, some are still warning of bugs, and others are trying to find a silver lining by taking control of the rest of the event. 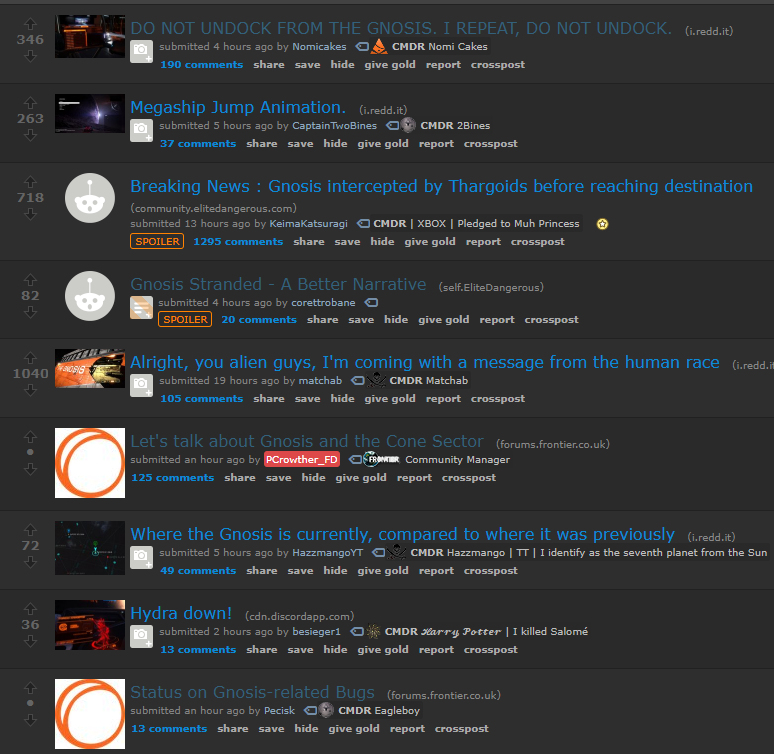 Source: Official forums. With thanks to Stuart!
Advertisement