It’s a bit odd to say this about a Pokemon game, but raiding in Pokemon Go is kind of a big deal. Multiplayer has always been a core part of the series, but it’s mostly been PvP. Niantic’s design choices aren’t always on point, but since its first reveal, I knew it was something that would change the nature of the game, and it certainly did. I’d argue that the introduction of raiding, something I normally dislike in MMOs, is what really helped solidify POGO as at least an MMO-esque game.

But as in your typical MMO, raiding is drastically different from what you do 90% of the time in game. The new quests/tutorials kind of help with this, but there are some very basic issues that even people in my raid group still ignore. While having strong allies is part of the reason for this, numbers can help offset this as well. But if you’re reading this guide, you probably need to help your local scene out, or at least want to tackle Poke-bosses like a boss trainer. Especially in light of the major upcoming raid event.

Preparing for and tackling legendary raids

Before we get into raiding, you need to start with the basics: gym battling. Don’t worry, I’ll wait while you go back and skim that guide quick. Heck, I’ll even re-use the images because they’re that important. Whether battling for a gym or trying to take down Mewtwo, the game’s basic battle system is the same. The main difference is that raids will attract more people, and the battles are much, much harder.

As with gym battles, you’ll want to make battle teams for legendary raids. One and two-star raids are soloable. Before they hatch, they’re pink or yellow. Pink is safe to solo, while yellow can be dicey and requires some preparation. Pokebattler.com will be your best friend for that, though, so we’re skipping straight to general tips for legendary raids.

Legendary raids (blue/black/purple-ish eggs or “5-star” raids) are Pokemon that tend to have very high stats and cannot be caught in the wild. In the main series, they’re Pokemon you usually get only once chance to catch. They also can’t be soloed. Legendary raids (especially EX Raids, which until the September 2018 event) is currently the only way to get Mewtwo) are the main group content you can get people to come out and do together.

If you don’t have a local group to get advice from, try using the PokeBattler Raid section. For advanced trainers, you can use it to simulate tons of different battles and even input your own Pokemon to min-max to your heart’s content. For casuals, just click on your opponent to get an idea of what might be good to use. Then create a team like you did for gyms.

Now, assuming you don’t have a community to help you out, you’ll want to find a gym yourself. While you can technically try to raid anywhere you see an egg hatching, without knowing the local scene, you could end up wasting a lot of time. However, Starbucks, Sprint, or other sponsored gyms tend to be good hotspots. They’re also locations that tend to be chosen for EX Raids, which are invite-only (if you belong to a community, ask which locations these are so you can prioritize them when raids occur there). Popular parks are also a good choice for the same reason.

Make sure you’re at the location at least a few minutes before the raid starts. Timers are shorter, so this can be hard to do, but it’s certainly the best time to arrive. Remember, an egg above a gym means the raid is about to start. When solo raiding, you generally need to be at the location within the first few minutes, as that’s often when the most raids occur. I can tell you, however, that in smaller communities, it may be that no one is there, especially during work/school hours. This is again why I highly recommend most people find a community first if it’s at all possible.

When you are close enough to use the gym, it’ll display how many people are already queued up in the lobby. Unless you are raiding a soloable raid, I would advise against pressing the “battle” button as a solo player until you see other people in the lobby (there’ll be a number on the button to tell you how many people are already there). If you are in a busy city, you might be OK starting the Battle, as others could be waiting for someone else to jump in. Just remember that there’s a chance you won’t have enough people (or strong enough ones) to complete the raid, so this should be used as a last resort strategy.

Once you hit “Battle,” you’ll use your raid pass up, meaning if you fail, you’ve wasted your pass. And remember, you get only one free pass a day (though you can get a second one if you hold on to the previous day’s pass).

Most raids take 3-7 competent players, but it’s possible to fail a raid with a max group of 20. Again, use the suggested resources and check The Silph Road, as users often submit visual aids to help people plan for raids.

The Pokemon the game initially suggests to you upon entering a gym or raid are for survival. While those Pokemon may last a long time, the recommendation formula doesn’t pick the best attackers. For example, you might try to fight Regirock, and the game will suggest using your Ho-Oh with Fireblast. That probably means Regirock will have fighting type moves, but Ho-Oh, in general, won’t deal as much damage as Moltres, and against Regirock, you really don’t want to be using fire types period.

As a new player, you can use the recommended teams, but for veterans, I’d suggest making your own teams and saving them as a party. Dealing more damage not only ensures that the raid is a success (don’t forget: your battles are timed!), but it helps you earn a personal bonus and helps your team with the team damage bonus. These directly translate into more Premier balls because, well, just beating a legendary Pokemon isn’t enough. 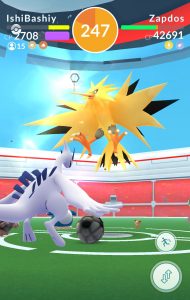 After you beat the boss, you get a chance to catch it. Like quest and hatched Pokemon, raid bosses have a higher chance to have good IVs. Depending on the weather, they can also be “weather boosted,” meaning they’re several levels higher, saving you both candy and stardust. This is important because legendary Pokemon require you to walk twenty kilometers for a single candy! If you’re collecting just one Pokemon, that’s fine, but if you want to raise it, more candy is better, and that’ll mean more raids.

However, you can’t catch boss Pokemon like regular Pokemon. Depending on if your team controls the gym, which team did the most damage, how much damage you dealt, and if you raided with a friend (and your rank with them), you’ll receive a certain amount of Premier Balls. Once those balls are gone, so is the Pokemon. While raids give other rewards, like TMs to change your Pokemon’s moves, Rare candy that can become any Pokemon Candy you need, Golden Razzberries that greatly increase the chance of a catch, as well as basic supplies like potions, the main reward is the new Pokemon, and it can run away.

This is where your throwing practice comes into play. See, you can complete a raid at a specific location only once per 45-minute period. If you fail the raid, your pass allows you unlimited attempts to try again and again until the raid timer ends or you succeed. If you use up all your premiere balls trying to catch the Pokemon though, you’ll need to use another raid pass at a later time or at another location. Raids are generally random, so it’s best not to miss. That being said, I know people who can throw excellent curveballs consistently across multiple devices and still not catch their legendary target.

If you’re intimidated by this, don’t worry. It’s not uncommon to pass your phone to a fellow player and ask for help. Theft can be a thing though, so do this at your own discretion, especially if you don’t have your own group yet.

For EX Raids in particular, you basically get just the one chance. These are invite-only events that Niantic automatically sends out based on a lot of factors, though what the company says and does doesn’t always align. Worse, you may get an invite during a time you can’t actually raid, and unless you have a friend that can take an extra device with your account on it, you’re of luck.

If you get an EX Raid and can attend, be early. These can be big social events, so don’t be too shy about making it obvious you’re playing. Not only does it make it easier to find a long-term group to play with (my local group has picked up tons of people from EX Raids), but you don’t want to be left out. Locals may make a private group to lock out spoofers.

If you’re invited to a private raid (which isn’t limited to EX Raids), you’ll want to hit the “Private Group” button and ask for the code. Conversely, if you decide to make a private group, hit the private button and then “Create Group”- you don’t actually get to pick a code, it’s automatically generated for you. To note, it is possible to guess what this code is, so people can still invade your group, but that’s a whole other article.

You get one free raid pass per day, though if you didn’t raid the previous day, you can spin a gym and get a second pass. It’s not uncommon for people to discuss other, nearby raids after completing a raid. If no one mentions one, feel free to suggest it. If you don’t know the location of the next raid, and you’re feeling sociable/confident, you can ask someone to text you the address or directions. Again, use discretion, but exchanging Discord handles or phone numbers also means people can contact you for future raids.

People may offer you a ride but, as usual, use discretion. Real life is a PvP server, and permadeath is a thing. The buddy system here is great, but if you’re a solo player like I was for a long time, it’s OK to keep your distance until you know people better. It can be tough finding a raid group, especially as a rural or suburban player with 9-5 work hours (and worse with long commutes). I’ve been following these rules while traveling for work though, and I’ve done a decent amount of raids with strangers, but if other readers have other ideas, feel free to leave them in the comments below!

Pagan Online is sunsetting its multiplayer servers, but the singleplayer campaign...