It looks as if a new round of alpha invites are going to some folks signed up for Amazon’s New World.

Our tipster says he signed up through the Amazon “stay updated” clicky when the game was first announced, and he’s also an active Prime member. There are folks on Reddit claiming that they signed up much more recently than that, however, so it’s more likely entirely random.

Reportedly, the alpha isn’t actually accessible yet and is white-screening these early participants, but we expect it won’t be long now before the launcher actually does something! 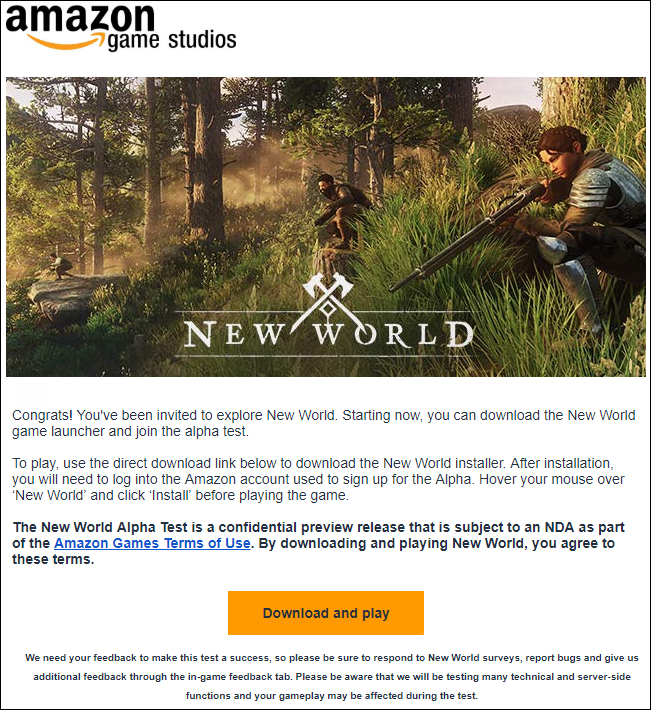 With sincere thanks to our tipster, whose name I am not divulging on purpose!
Advertisement

Wish I had gotten an invite :(

Not too bad. Gonna DL it and give it a try.

I’d rather try the beta (or alpha or w/e it is) of Old School Runescape for mobile.

Meh. I was excited about this many months ago before finding out that the game isn’t forming into anything I might be interested in.

Go take a look and try it out. You never know it might click for you but if it doesn’t then nothing lost at this stage other than some time .

Agreed. Then if you say you ended up liking it might be a good sign for those of us in the ??? zone.

These days new MMOs Alphas are very rare occurrence indeed, if I was you I would join and give it a try, it is free after all ;)

Nothing for me but now I feel impelled to check every email I get from Amazon, so another win for them I guess.

Well for good measure I just signed up and will keep my fingers crossed. Amazon UK does not offer the option *not available in your region*, but it was easy to switch to Amazon US. This is getting quite exciting 😁