I believe a game has hit an unusual place when players get nostalgic pangs for a game within the game itself. We see that kind of things in franchise games like Elder Scrolls Online. The Morrowind expansion was a huge nostalgic trip, but it wasn’t for the earlier times within the game itself. ESO built its nostalgia from other games in the franchise. But if we look at World of Warcraft, we can see its self-nostalgia creep in all over the place. Most obviously when they reused Ragnaros in Cataclysm after having him defeated in Molten Core. If done well, pulling on past characters can make for interesting stories and a lot of fun for gamers.

END_OF_DOCUMENT_TOKEN_TO_BE_REPLACED
Star Wars: The Old Republic will hit this unusual stage with Update 5.10 Jedi Under Siege when it launches in just a few weeks. I was going to say that BioWare hasn’t started reusing raid bosses, but then it’s used Kephess so many times that it’s become a meme. However, the reusing of Kephess wasn’t exactly for nostalgia; it was more to show the power of the Dread Masters. In 5.10, BioWare will bring back a few different characters from the game’s past, some more interesting than others.

I am keeping one of the reveals under spoiler tags because it’s a rumor. I’m not completely sure how truthful the reveal is, but just in case the rumors are true, I don’t want to ruin it for those want to jump in spoiler-free.

The return of Master Gnost-Dural

I have a book that came with my collector’s edition of SWTOR called the Journal of Master Gnost-Dural. And although he’s never made an appearance in the game proper, he is one of my favorite characters in SWTOR. We don’t exactly get to meet him personally, but we can infer a lot about his personality from his writing and the timeline videos that were released before the game launched.

Did I mention that he is voiced by Lance Henriksen, one of the most iconic voices in movie history? I put his voice alongside Morgan Freeman, James Earl Jones, and Alan Rickman as memorable and iconic. IMDB would disagree with me, but then maybe IMDB editors haven’t seen Aliens as many times as I have.

Gnost-Dural stands out as one of the great Jedi historians. His recorded histories leading up to the signing of the Treaty of Coruscant set the stage for the epic story that was vanilla SWTOR. His studies of the motivation of the Sith Empire gave us insight into not only who he was as a historian but also who the Sith Emperor was as a strategist and opportunist. Through his storytelling, we could see how the Sith Emperor was more interested in the long game and that there were no accidents in anything he did. I would consider Dural to be one of the greatest Jedi detectives in the game or really in the history of the Jedi because of the way he picked apart the Empire’s plan. 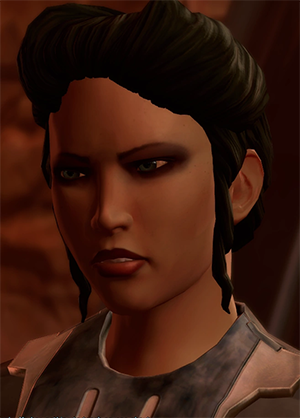 Where have I heard then name Malora before?

Malora’s story begins with your story in SWTOR. If you’re a Sith, you get to decide how her story begins, but regardless of your involvement, it begins with Renning. You meet Lord Renning on Korriban if you run the side quests. He wants you to retrieve the brain of a mutant Tuk’ata, but his apprentice believes that his work is preposterous and hopes to get him exiled. She asks you to sabotage the brain of the Tuk’ata when you find it. If you decide to work with Renning and reveal that the apprentice is a traitor, Renning will torture the apprentice and get rid of her. That apprentice is, of course, Malora. Renning dies at the hands of the Republic when it invades Korriban a few years later regardless of your choice, but I am very interested to learn what role that choice makes in your relationship with Malora in Update 5.10.

Community Manager Eric Musco mentioned that she is now a member of the Dark Council, heading up the Sphere of Biotic Science. Besides reintroducing this character to the SWTOR storyline, this also low-key tells the audience that the Dark Council is a thing again. At the beginning of Knights of the Fallen Empire, Lana Beniko tells us that the Dark Council was killed or fled when Arcann and Thexan attacked Korriban. Even though we were told that Acina likely controlled the Imperial Ministries directly, we now know that the Dark Council has been reformed in some fashion.

Rumors are flying about the return of [SPOILER!]

Many of us know by now that there was a deleted scene in the Blur Knights of the Fallen Empire trailer. The twins revealed their trophies to their father Valkorion. In the final cut, we saw them lay out lightsaber hilts from the Empire and the Republic. It was suggested that one of those hilts belonged to Darth Malgus. But what was even more revealing was the deleted scene that had an image of Darth Malgus in carbonite.

The rumor floating around the community is that Darth Malgus will return in 5.10. Questions are circulating around the community, too. How did he get back? Didn’t we kill him in the False Emperor flashpoint? What does this mean for the Empire? Did we just take him back after betrayed the Empire and attempted to dethrone the Emperor? Although I am excited about his return, if it’s true, it really leaves more questions than answers. But one thing I really hope is that he becomes a companion, and would he be romanceable?

SWTOR, my MMO home for 5 years. Oh, I do miss the old days. Heh. Even the pre-group finder days where you had to go to the fleet to run flashpoints. Lol! Yeah, it was a pain in the ass, but in those days devs were actively trying to improve the game while maintaining to the Core Pillars they often described. Remember that?

Well, we have come a long way and it was a roller coaster ride. At its apex, the game was solid. It had it all for a theme park. It was right before KoTET. All that was needed was a new Ops to go along with the new story focus. But they didn’t deliver.

Instead, they started doing what they hadn’t done before. They introduced gimmicks as game improvements. Command XP, those renamed watered down Flashpoints, and the one Ops Boss every 6 months bullshit. LOL! It was so transparent. They wanted to recycle content with the same story across factions and classes to easily sustain the game.

And that was it. I packed my lightsaber up and moved on. IMO, they ruined a wonderful thing.

So, bringing back old foes and expanding their story, will it pull the game up and out of the continuing nosedive? Hmm. Is it just another gimmick? Or, is it a return to what made the game great? We will see. I certainly don’t plan on sub’ing based on this announcement.

Until they stop hamstringing classes, the game will be boring and not star wars. Bounty hunters forced to use pistols because durrr boba fett had them? Smugglers and BH not being able to choose their alliance because Solo was a rebel and Fett worked for vader? Trash.

The worst offender though is jedi and sith not being able to do the most simple things. ALL of them should have a push, pull, saber throw, a leap, choke/stop movement, and be able to master electricity eventually. And get rid of light saber restrictions! I shouldnt be forced to dual wield for exmple.

BW (to me) was all about your companions, SWTOR was the weakest link because you only have one companion instead of the two in SP games, now we don’t even get one companion, instead we get one Lana/Theron fits all temps, that we can’t even keep if we like them.

The game is a giant credit sink/cartel lure, the story is just an afterthought.

But at least they got one thing straight, most people playing empire want to maim and kill not be maimed and killed by superpowerful nutters, so now the game goes back to its’ roots of the sith going after the jedi/republic because space isn’t nearly infinite with nearly infinite potential resources anywhere the jedi/republic aren’t, just like the original SW or even KOTOR right?

Waaaah they wont give us free stuff waaaah

Ultimately I think it’s a neat idea to bring back some existing characters.

Having at least some continuity with older parts of the story should be a good thing.

WAAAAAAAAY too early to say if they have or can turn the ship around at this point (hopefully they do).
Interesting story twists aside as appealing as they may be it is ALL about the implementation. It is that which will be the deciding factor, that and faith in their ability to deliver, which lets face it is not overly great at this point.

Absolutely agree. It’s not so much what they intend to do, as how they do it, and whether they can follow through on what they set in motion. I hope for the best, but will wait until I see what arrives before allowing my expectations to be put at risk.

I think we will have a better idea of that once Anthem launches and some of the Swtor team that have been recruited for this all hands on deck panic crunch are returned to do their regular jobs.