I know and you know that MMO developers love Halloween perhaps more than their own flesh-and-blood children. And as much as I enjoy how this passion emerges as rampant festivities, I am a little tired of lazy devs figuring that all they need to do is drown us in pumpkins. Pumpkins here, pumpkins there, pumpkins EVERYWHERE. Halloween has more decoration possibilities than orange gourds!

Anyway, Toy Clown is posing by some pumpkins: “A little bit of fun in FFXIV! My character is dressed as a dragon with All Saint’s Wake decorations in the background. I’ve been having fun creating my own costumes from the hundreds of pieces of glamour I have sitting around.” 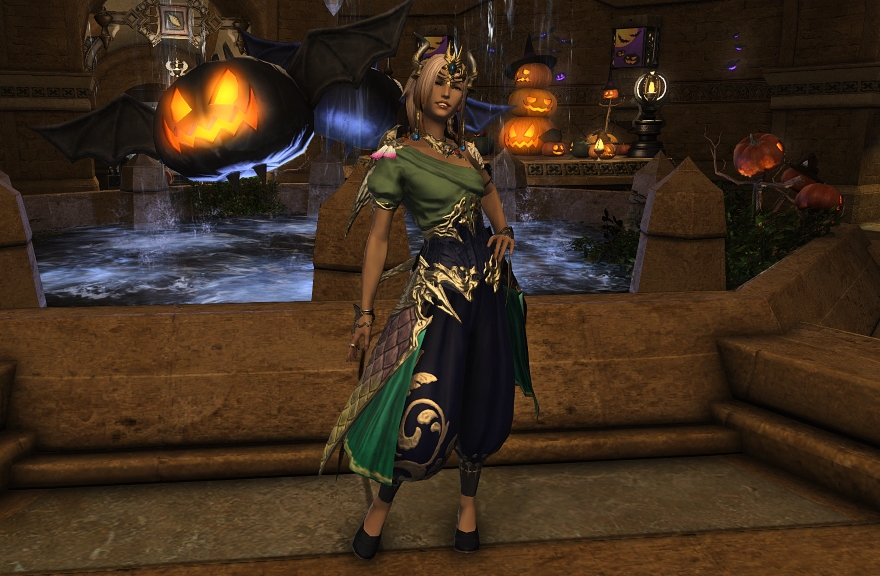 Then again, the Guild Wars franchise has always been far more into candy corn, for some reason. Like, ridiculously into candy corn. Listen, I actually love candy corn, and even I think that this might be making players diabetic.

“Here’s the candy corn monster in Guild Wars 2’s Lion’s Arch,” said Minimalistway. “Speaking of which, I never had candy corn before.”

It’s awesome. Eat it by layers and ignore the haters. 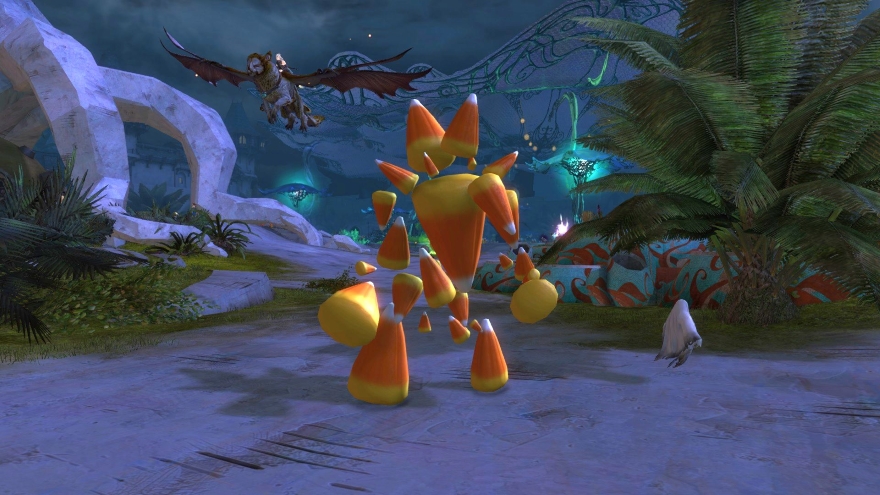 “Hey there! I hope everyone is well. As for me, everything’s coming up rainbows over in FFXIV since I recently encountered this rare bit of weather over the Azim Steppe. I’ve played for five years, and this is the first time I recall seeing a rainbow in the sky. By the time I’d run to post my find on twitter, the sky had changed to bright and clear sunshine,” submitted Vexia. 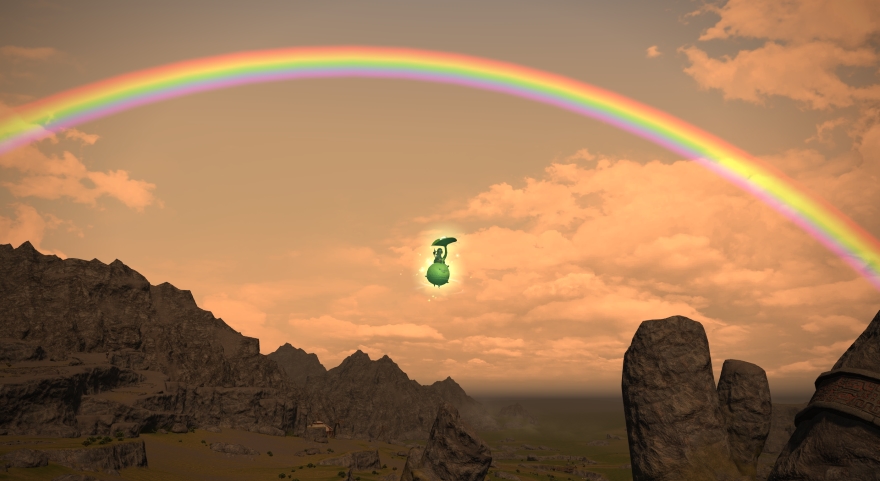 “This is the fourth floor of the hub area in Monster Hunter World,” sent in Namtubb. “Halloween in-game is currently over (just like in real life…right?) so I had to grab some screenies before it ended. Not pictured are the bipedal cats dressed as ghosts with pumpkins on their heads ’cause no one likes cat photos (and totally NOT because I forgot to take any).”

Are pumpkins ever scary? Seriously, ever? 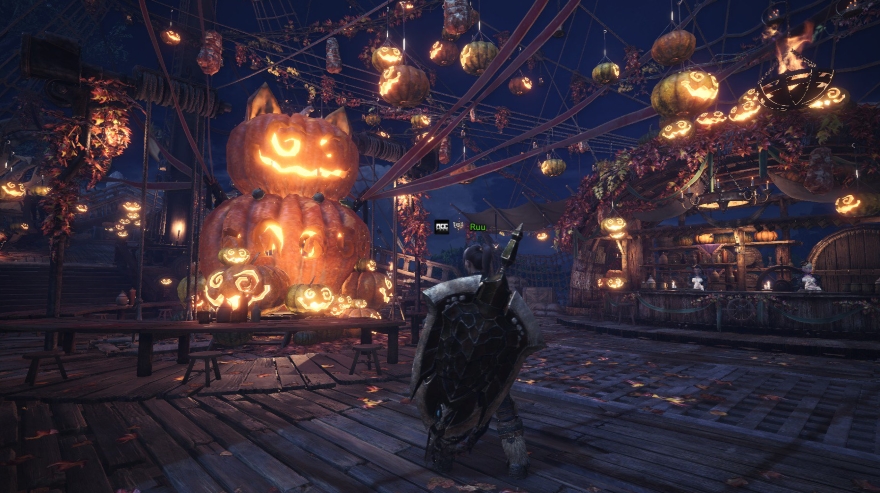 Then there’s this Harry Potteresque setting from reader Amorey. I’m trying hard not to think too deeply into the dangers of hot wax dripping on heads from above. Hogwarts must’ve been a disgusting place to live, with that and the constant owl poops.

“As for this week challenge, Landmark was my favorite place at this time of the year. I would spend many hours building and decorating. I am still very sad the game was taken away from us. Every new season was an excuse to build something new and more exciting.”

It has been far, far too long since we last did a fashion show here in One Shots, so for next week’s challenge, show us your newest and best character outfit and tell us how it came to be!

My Trinity warframe showing off the pumpkin carving implements while wearing seasonal colors.

With PoF, I was surprised how well a certain cultural “medium armor” from the cold loving Norn fits with Crystal Desert’s people’s sense for clothing in its scorching heat! Or am I the only one thinking this? XD

I’ve been at Elder Scrolls titles since Daggerfall, and ESO (through all the growing pains) since beta and launch. In all games, sometimes I find favourite things regarding cosmetic items, specifically.

This Covenant Scout costume I don’t always use, but it falls into that “10% of your clothes you wear 90% of the time” unwritten rule. I pulled this one out of the wardrobe recently not only because I like it, but also because it has a seasonal (read: Halloween) pallette I applied a couple of years ago (maybe?).

I like the simplicity of the black and orange for my Bosmer Nightblade, and it’s a practical consideration given her skills, too. Also, the leather armour with those colours looks fabulous.

Before I forget this, and since you where asking: Demon Shaman (Smexy!)…

(And yeah also…thought readers would want a break from the more photogenic Lyn I usually post. o.O )

Since we’re heading to the Exiled Lands for Halloween, I thought I’d dress up for the occasion as a pirate. :)

Thank you for showcasing my horrible pumpkin screenshot! :D

For FFXIV, I did up a new glamour when I hit level 70 on Summoner yesterday and got a fancy screenshot! I’m sure it makes it hard to tell the details, but it’s okay! I’ll post up my BDO character, where I’ve figured out how to make Remastered look pretty, and you can see all the details in her new outfit! Surprisingly, this year’s Halloween outfit covers more skin than most other outfits put out for female characters, so grabbed it with a 30% off coupon.

Wait…newest and best? You mean people don’t change their outfits every time they log in to a game?

There is my Mag in Warframe, dressed up for MJ’s Halloween Stream last week. The sigil we earned on stream.

Today, for a community event, I did a throwback to Hikari’s HiveMode costume that appears in Secret World Legends. The outfit was designed to show off supernatural heroes in a Post-Mundane world.

Finding the balance between Fashion and Survival in Conan Exiles is always a struggle. I often find myself overheating because a good outfit is meant to be worn in the frozen north. The new archer outfit from the latest DLC gives a good balance of stats and looks. After putting on a better headpiece of course. :)

Finally, DCUO has a lot of ‘must haves’ when it comes to costume choices. For me, it was the Diana Troy cosmic material and the Starfire hair. Throw in a little orange (thanks Natalyia :) ) and you have the perfect Samhain attire.

It should be noted that Natalyia and I had to grind out Titans events for 3 hours straight to unlock that hair before MJ’s stream. :)

For next week’s fashion challenge, here are the Toy Story outfits I put together recently in Warframe, just because I love both. Rhino Buzz, Frost Zurg, Mesa Woody, and Trinity Bo Peep.

One of the reasons Warframe can be so much fun. Thank you.

FashionFrame indeed. I love to collect them in this game, too!

I’m trying hard not to think too deeply into the dangers of hot wax dripping on heads from above. Hogwarts must’ve been a disgusting place to live, with that and the constant owl poops.

Very special umbrellas and umbrella charms are not uncommon at Hogwarts ;)

The Umbrella Charm (incantation unknown) is a spell that creates a magical umbrella, shielding the caster from the rain ( candle wax and owl poop ) . It is cast by raising one’s wand, it’s tip pointing upwards towards the sky, and uttering (or concentrating on) an incantation, which will produce a semi-transparent, bluish umbrella of magical energy